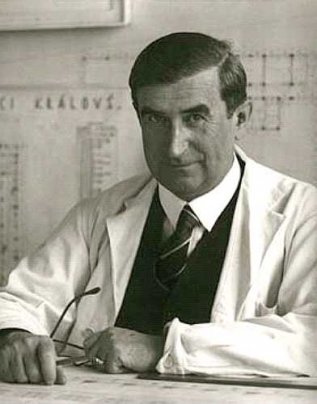 Josef Gočár, one of the most influential Czech architects in the 20th century, was born in Semín u Přelouče on 13 March 1880. He studied in Kotěra's studio at the Czech Technical University in Prague and the Academy of Arts, Architecture and Design in Prague. After graduation he travelled abroad several times and became the head of Kotěra's private design studio. In 1908 he set up his own design studio and embarked on an independent career. In 1911 he co-founded the Group of Artists, whose members contributed to the formation of Czech architectural cubism. The House of the Black Madonna in Celetná Street in Prague is Gočár's most prominent cubist design. After his return from World War I his works shifted towards national tendencies and Gočár, together with Pavel Janák, became the leading figure and promoter of the so-called national decorativism or rondo cubism. The most typical examples of this style include the building of the Prague Legiobanka in Na Poříčí Street. After the death of Jan Kotěra in 1924, Josef Gočár was appointed professor at the Academy of Fine Arts, where he was elected rector four years later. Gočár's transition towards avant-garde architecture is best illustrated in St. Wenceslaus Church in Prague - Vršovice and two villas in the Prague Baba estate. Gočár retired after the Nazis closed the Czech universities in 1939. The architect died in Jičín on 10 September 1945 and is buried at Slavín Cemetery in Prague. In 1995 he was in memoriam awarded the Golden Memorial Medal of the Academy of Fine Arts. In 2000, a poll among the professional public elected him the most prominent figure in Czech architecture in the 20th century.