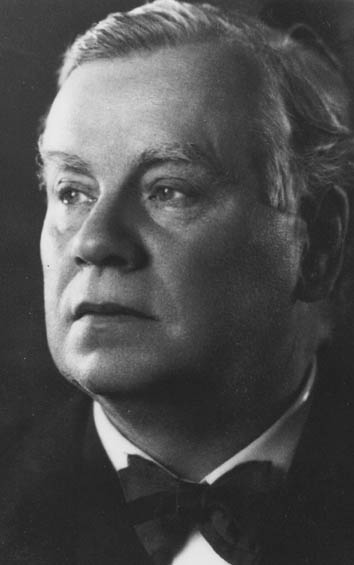 Leopold Bauer, architect, applied arts designer and theoretician, was born in Krnov on 1 September 1872. He started his studies at the Vienna Academy in 1892, first in professor Karl von Hausenauer's studio; he also worked in Otto Wagner's private design studio beginning in 1894 . In 1900 he set up his own studio and became a member of the Wiener Secession. He is sometimes referred to as the designer of the monarchy's first modern building – the Karl Reißig Villa (1901-02). However, in 1905 his architectural approach took a turn when the first dislike for the excessive rationality of modernism was voiced. In 1913-19 he worked as architecture lecturer at the Vienna Academy. He designed the Austrian-Hungarian Bank building in Vienna in 1918; he also participated in the affordable housing development project Rote Wien. At that time his architectural work changed significantly once again as he drew inspiration from American architecture, mainly from the buildings of Louis Sullivan and expressionism. These tendencies are manifested in his design for the Breda & Wenstein Department Store in Opava (1927-28). The architect, who is sometimes considered a predecessor of post-modernism mainly for his penchant for historicism and eclecticism, died in Vienna on 7 October 1938.