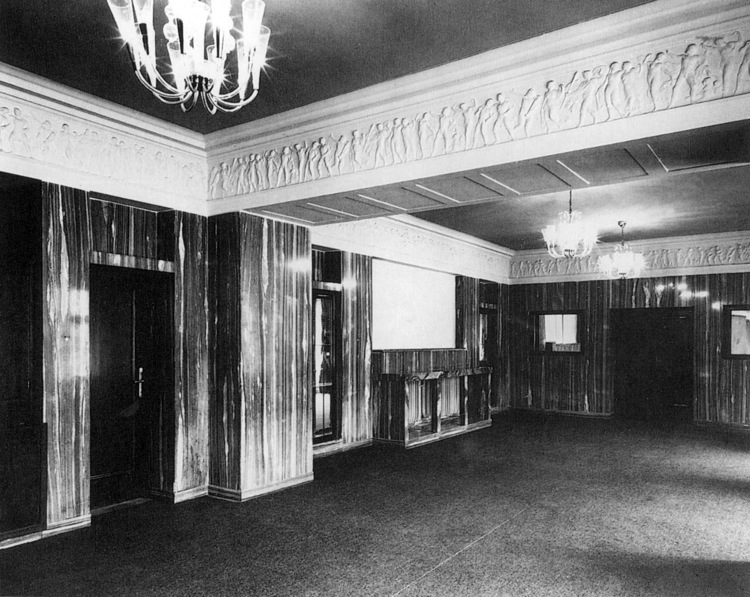 “I myself had only the dining room renovated by architect Loos in Brno, V Hlinkách Street 39/41, namely with marble panelling, recessed paintings and a marble sideboard, but the space in question is not yet finished; the floor is not laid and the furniture is missing, so I can hardly serve you with this building.”
Viktor Bauer Jr.’s letter to Anton Schroll from 11 June 1930; Dagmar Černoušková, Zámeček na výstavišti. K úpravám starobrněnského zámečku Viktora Bauera [A Chateau at the Exhibition Centre. On the Remodelling of Viktor Bauer’s Chateau in Old Brno], in: Jindřich Chatrný – Dagmar Černoušková (eds.), Brněnské stopy Adolfa Loose [The Traces of Adolf Loos in Brno], Brno 2010, pp. 67–70, p. cited 69.

Besides the lady’s bedroom on the first floor, the marble dining room is the best-preserved room in the Bauer Chateau; it clearly illustrates Adolf Loos’ creative practice, even though it was never completed. Characteristic of the architect is mainly the marble cladding and recessed paintings, antique-looking figural frieze, built-in furniture, the type of lighting used and, in general, an emphasis on symmetry.
The most distinctive element of the large hall, divided by a curtain into a lounge with built-in sofas and a dining room, is the cladding of green marble with distinctive white veining, the so-called cipollino. Loos used the same type of stone in the Kraus apartment in Pilsen (1930–1931). The marble cladding ended just below the ceiling along its entire perimeter, with a figural frieze with an antique motif of bacchanalia. The architect had previously used it both in public spaces (Café Capua, Vienna, 1913) and in private residences (Villa Duschnitz, Vienna, 1915–1916) and apartments (Arnold and Julius Bellak’s apartment, Vienna, 1907); i.e. always in rooms related to catering and hospitality.
In the overall concept of the hall, there is a striking emphasis on symmetrical composition, both in the case of the arrangement of built-in showcases around the marble sideboard, and the floral still lifes built into the sides of the main entrance. The front of the room was dominated by a large-format oil painting, also embedded in the panelling. It was the Mannerist painting A Feast in the Forest (1608) from the chateau in Kunín that Viktor Bauer Jr. inherited from his parents. Beneath the painting was a long built-in sofa lined with cipollino, a variant of which was also set in a shallow niche under the window leading to the garden.
According to surviving photographs from Bauer’s lifetime, the floor of the hall was only temporary and consisted of roughly worked planks. Under the windows in the dining area, however, rectangular flower pots lined with green marble were already installed in the floor. This was repeated in the mezzanine of the staircase hall and along the railing in the corridor on the first floor.
Lighting was an important part of Adolf Loos’ interiors. The architect used several types in Bauer’s dining room. Above the painting in the central part, there was a built-in ceiling light made of milk glass and running the entire width of the niche. The space above the two sofas was to be lit by two pull-out lamps. In the part of the room closer to the entrance, two chandeliers in the shape of simple milk glass discs framed with a gold embossed strip were installed on metal chains. The last type of luminaires were three-armed brass electric candlesticks in the shape of swans, twelve of which were mounted directly onto the stone cladding. The same type of wall lamps inspired by the style of Louis XVI can be found in the Pilsen apartment of Doctor Josef Vogel (1908) or in the already mentioned Villa Duschnitz and the apartment of the Bellak brothers in Vienna.
In 1930, the owner of the chateau, Viktor Bauer Jr., received a questionnaire from the Viennese publisher Anton Schroll, asking Loos’ clients to provide information for the forthcoming monograph. However, Bauer replied that the marble dining room had not yet been completed, and preferred to refer Schroll to the sugar refinery director Ottokar Skalník, who had documents concerning the Loos villa in Hrušovany. In any case, the origin of the Loos Hall can be reliably dated to 1922 and 1923, as the chateau owner Viktor Bauer Jr. provided photographs of the room in his photo album with the following caption: “Our as yet unfurnished dining room in Old Brno – a work of the architect Loos (1922/1923). February 1934.” At that time, almost half a year had passed since architect Loos’ death.