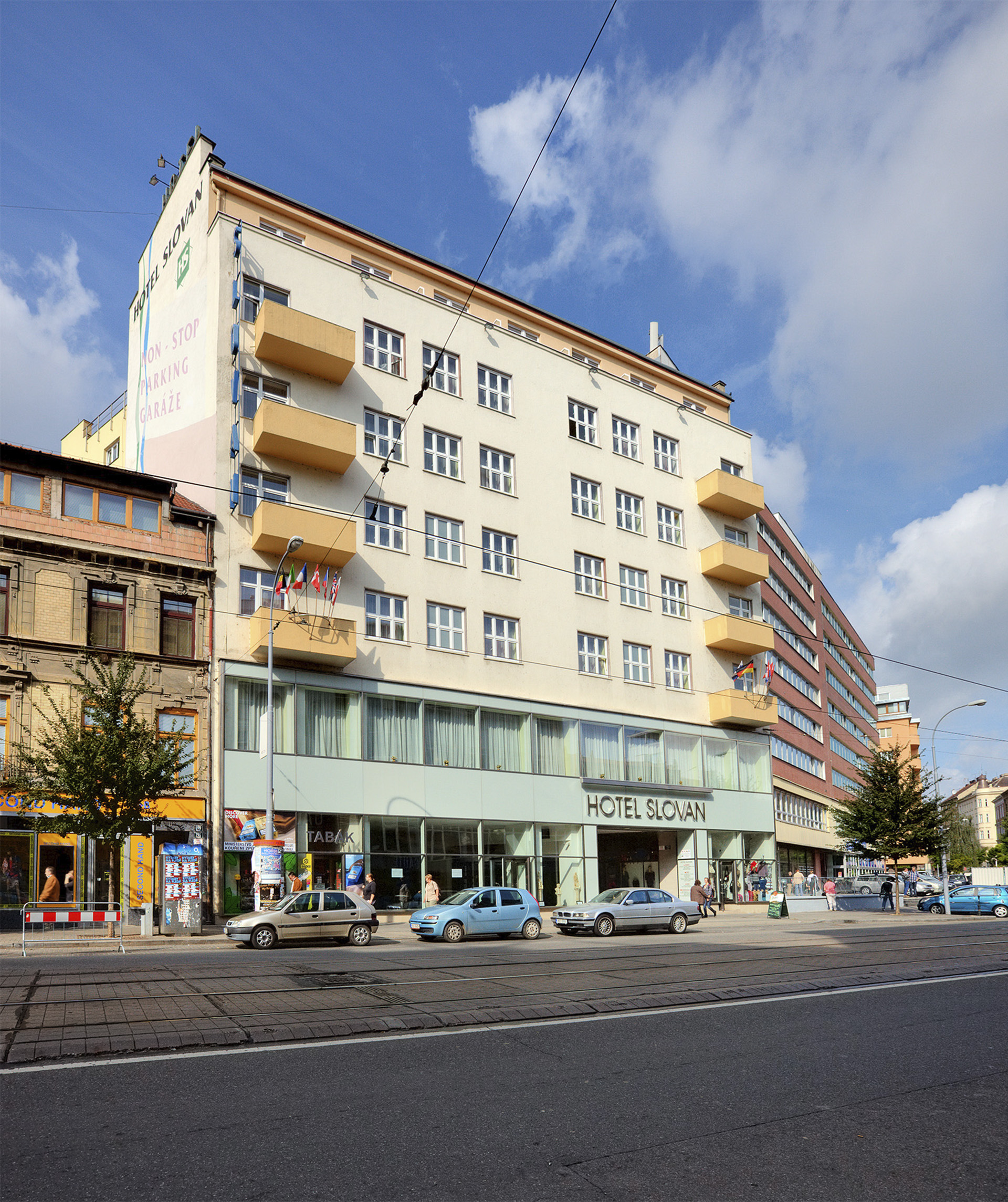 In the late 1920s, Brno builder Antonín Müller decided to build a state-of-the-art hotel on a site formerly occupied by the workers' estate known as Šmálka. Its progressive furnishings were inspired by hotels in Switzerland and France visited by his son Vladimír on his travels around Europe. The hotel designed by Bohuslav Fuchs was completed in December 1928. However, after Antonín Müller and his son died in a plane crash in 1930, the hotel was taken over by Müller's daughter Věra Odstrčilová and her husband.
An arcade linking Mášova and Lidická streets runs through the six-level building on a narrow ground plan in the shape of an irregular rectangle. The indoor court with the arcade is surrounded by the interconnected wings of the hotel. The street front consists of a commercial ground floor with large display windows, the glazed strip of the mezzanine and the grid of windows and balconies above. The topmost retracted level housed staff lodgings and a modern laundry. The design of the hotel respected the latest structural, operating and hygienic principles. The 145 single and double rooms featured built-in furniture and shared sanitary facilities located in the corridor; there were also several suites with private bathrooms. The interesting technical innovations included remote control of the room door by means of a button on the bedside table.
The glazed mezzanine housed a spacious music café overlooking Lidická Street; the neighbouring restaurant faced the inner yard. The side wing also housed a large cloak room and two aquariums with both ornamental fish and fish for the hotel restaurant. The south wing held pool halls, while the north wing housed smaller club rooms with a special restaurant and a large mirror hall where feasts and banquets were held.
The ground floor of the hotel boasted another restaurant, a snack bar and a wine bar; the remaining areas were occupied by commercial establishments supplementing hotel services. The basement housed the dance floor and technical facilities such as a large kitchen, wine and beer cellars, food refrigerators, a ventilation system providing fresh air to rooms at all times, and a small power station. The ground floor garage for thirty cars and the hotel's own filling station were accessible from Mášova Street; the raised ground floor was the seat of the motor club with drivers' apartments upstairs. While the hotel remains in operation today, both the interiors and the arcade have received numerous reconstructions.