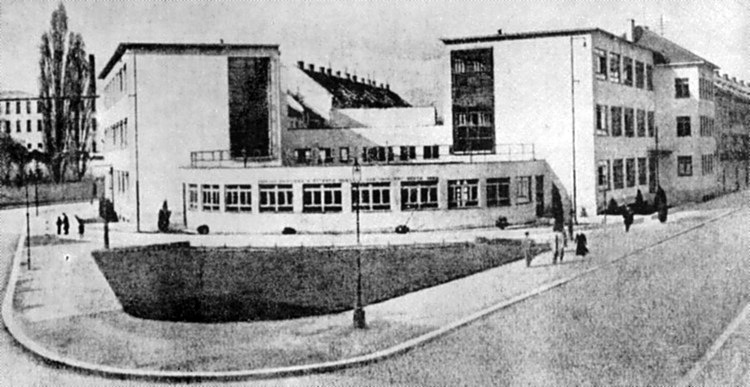 In 1932 a reform mixed elementary school was opened in Kuldova Street on the occasion of the 100th anniversary of the birth of PhDr. Miroslav Tyrš. Its progressiveness consisted in the application of the "global teaching method" which emphasised the interconnectedness of individual subjects and pupils' independent thinking. This reform stemmed from the idea of a democratic society which would provide for a balanced education of individuals taught to rely on their own intellect and act with the benefit of society in mind. The school cooperated with numerous experts on the children's regimen and attempted to involve parents in school life as much as possible.
The complex of buildings by architect Oskar Poříska, which housed not only the school's premises, but also a public library, is an urban landmark at the crossroads of Šámalova and Kuldova streets. The oblong school buildings copy the street line and, connected by the curved volume of the passageway with a terrace, form a V-shaped ground plan. The complex demonstrates functionalists' comprehensive approach towards designing schools. The architect emphasised the unity of form and function, which was meant to meet all operating, hygienic as well as educational requirements. This included the need for sufficient lighting in classrooms (which feature large windows facing southwest and west onto the street), corridors and outdoor premises (playgrounds, sports grounds and terraces).