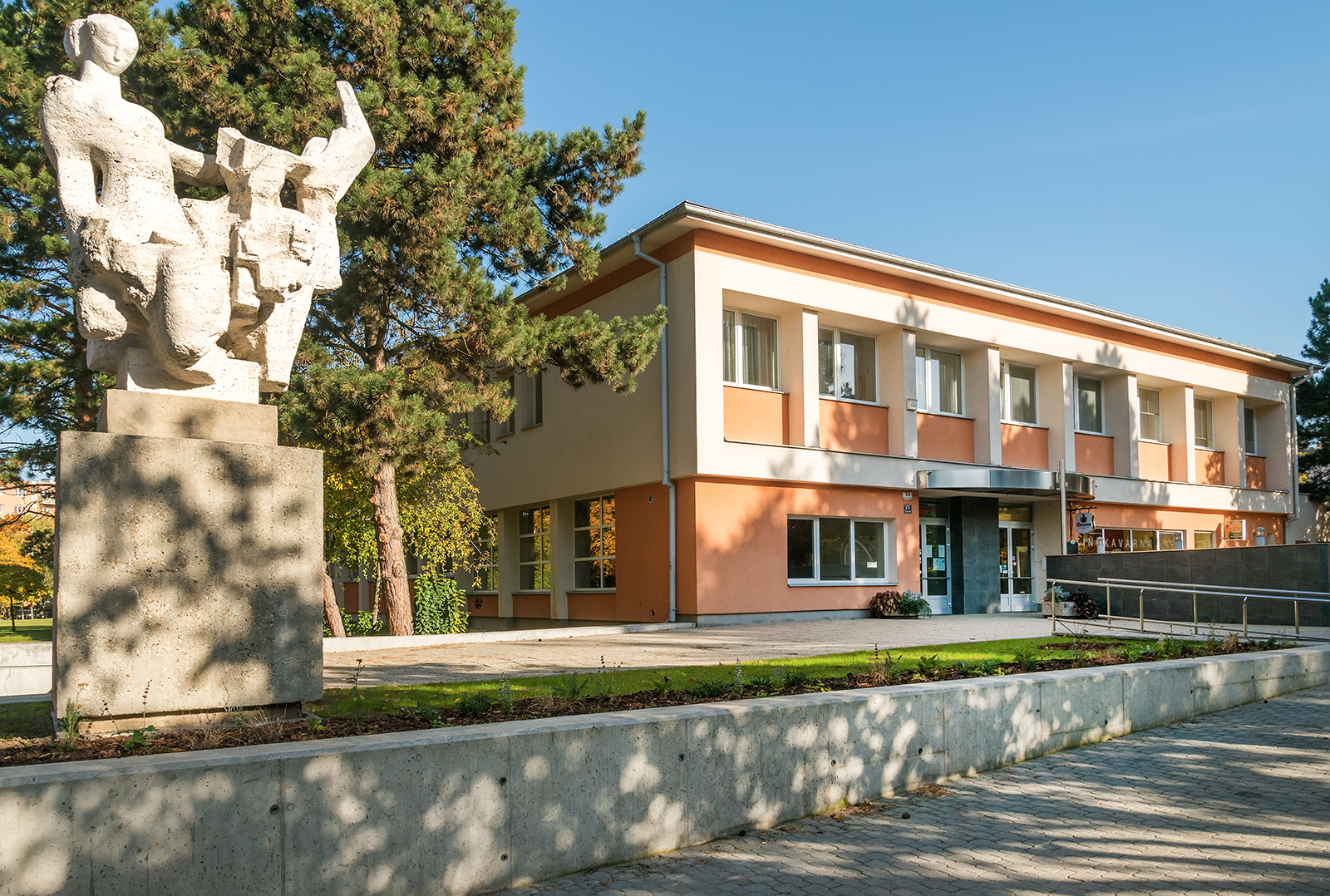 Náměstí SNP (Square of the Slovak National Uprising) with its multi-purpose cinema café and local supermarket formed the natural centre for social activity and public amenities for the housing estate in the northern part of Černá Pole district. This was designed according to the urban plans of Zdeněk Kříž, who was also the author of the psychiatry pavilion ​​on the Bohunice hospital complex that was influenced by ‘the Brussels style’. During 1960s, the estate outgrew the original structure of the urban development. Combining long eight-storey prefabricated panel buildings and thirteen-storey tower blocks, it filled the space in between the pre-war residential district and the new road (Generála Píky) leading to the residential district of Lesná. The two-storey building designed by the architect Vilém Zavřel comprised a community centre and a cinema café. It was completed slightly later than the buildings around it and opened on 13 November 1969 with a gala evening and as part of a national festival of health films. The construction of the cinema cafe is associated with a tragic event from April 1968, when the prefabricated ceilings collapsed during the construction, killing a number of construction workers and apprentices. Situated at the centre of the housing estate on an open trapezoid-shaped park between the prefabricated panel buildings, the cinema café was designed to offer residents of the estate film screenings in the comfort of a café atmosphere.

In the architectural expression and structure of the cinema café and its details, Vilém Zavřel not only displayed his functionalist training, but also the experience he had gained working on earlier designs, particularly the market hall building on Zelný trh in collaboration with Evžen Škarda (1947–1950), and the Janáček Theatre building, where he was the chief engineer and collaborated with Jan Víšek and Ivan Ruller on design.  The upper floor protrudes slightly, creating a shallow avant-corps all around the perimeter, which also separates the floors visually. A characteristic feature of this simple rectangular building is the prefabricated columns all around its perimeter, which gives the facade a vertical and distinctly periodic dimension. The architect set large windows between the columns and marked out the under-window sections on the entrance facade with a different colour of plaster. The auditorium could seat over a hundred people and was built to different heights according to the type of seating. Apart from the cinema, the community centre also included other amenities such as shops, lounges and ceremonial halls. Zavřel also uses huge protruding concrete ribs on the ceilings of the interiors. The building’s artistic decoration was provided by the statue Hudba [Music] by Jiří Marek. It still stands on a monumental square pedestal to the left of the café entrance.

The building was first modified in the late 1970s. Unfortunately, another more recent reconstruction of the cinema cafe led to a coarsening of its appearance. Apart from the garish new colouring, a number of the building’s original details disappeared, including the original design of the entrance.