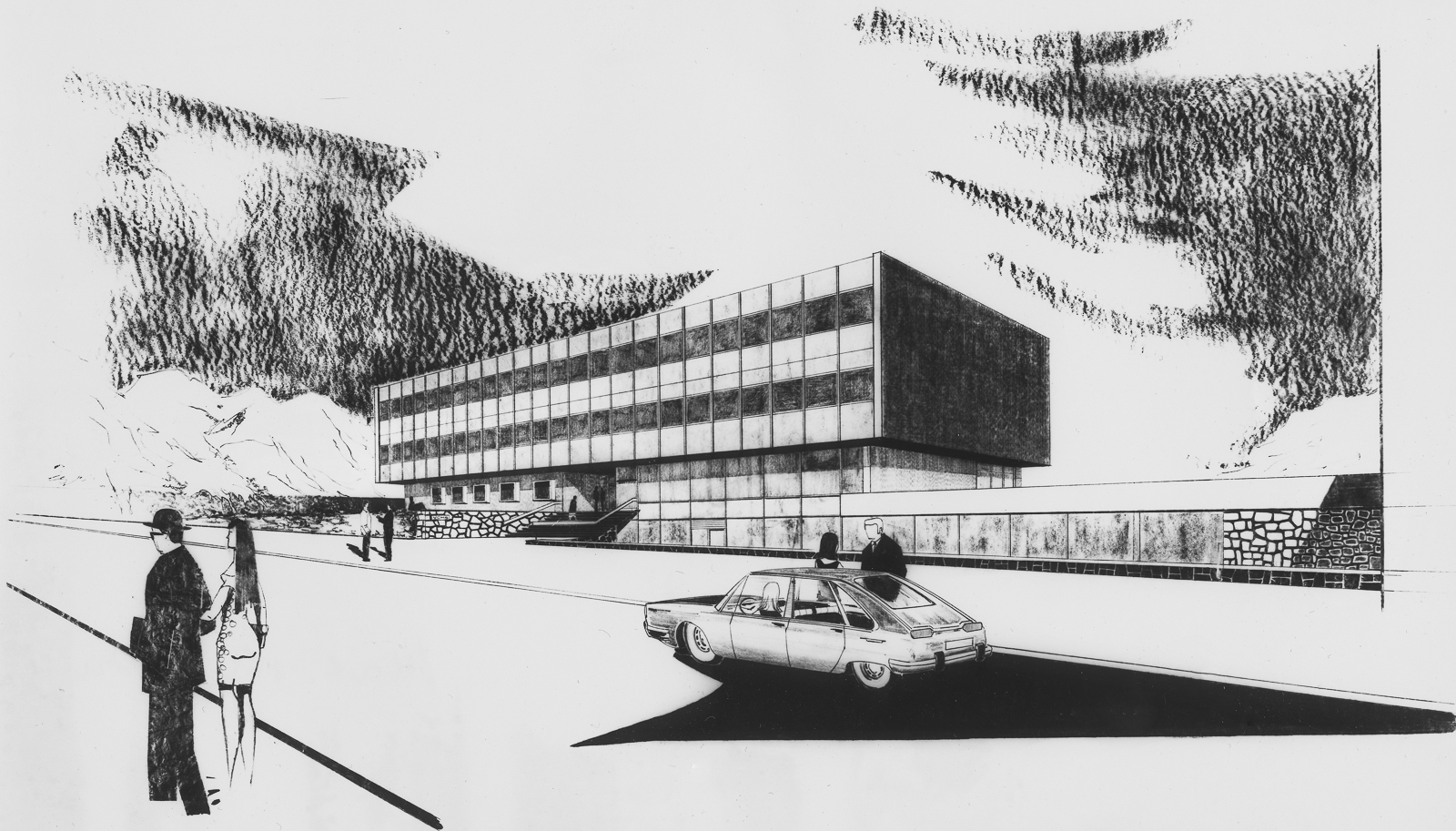 The building of the Research Institute for Mathematical Machines, designed by the architect Zdeněk Řihák at Atelier 01 State Project Institute, is situated in a space between the streets of Černopolní and Durďáková. In its dimensions, the low three-storey office building blends in well with the surrounding environment and, in its conceptual arrangement, seems to copy the horizontal entrance block to the Children’s Hospital (by Bedřich Rozehnal from 1948–1954) which stands opposite.

The raised ground floor and the open basement area of the institute comprise the spacious entrance hall, which features a glass wall facing the street and a staircase prominently positioned between two exposed load-bearing pillars. As they go up the stairs, visitors pass a three-dimensionally sculpted concrete wall, which is the work of Eva Kmentová, artist and member of the group Trasa. The monumental, structured concrete of the wall is scattered with white and gold spheres all the way up, which, in its random pattern, is meant to symbolize the computer technology of that era. The staircase is connected to two other closed office floors, which, on the façade, were originally separated from the entrance part by atypical curtain panels with continuous windows and vertical aluminium strips. For its time, the building was a progressive conceptualization that was meant to convey an airy feeling with its open ground floor and a suspended staircase seemingly rising from the basement above a boiler tank through the glass wall and out into the front garden. The raw colour concept of the institute’s boiler room, as observed by visitors passing through the interior, provided an even greater contrast to the refined metal materials, polished concrete and glass. With this design, Řihák in some way follows the pattern of the interwar period, while enriching it with modern architectural features, as exemplified by the fact that the building was among the first to use lift slab construction technology.

After 1989, a part of the ground floor served as shop selling heating equipment. The building underwent extensive reconstruction after 2000, when the curtain panels were removed from the facade and windows and doors were replaced. The original architectural expression of the exterior was covered up under a new layer of brown blocks of plaster, and the exposed technical equipment also disappeared from sight. In spite of this, the interior miraculously retained most of its authenticity, not only in the form of the surviving art work, imposing staircase and outdoor water tank, but also in the use of the renovated entrance area as a café. The café owner conceived it tastefully in retro style, so the visitor can admire the well-preserved parts of the interior and the art work of Eva Kmentová over a cup of coffee.