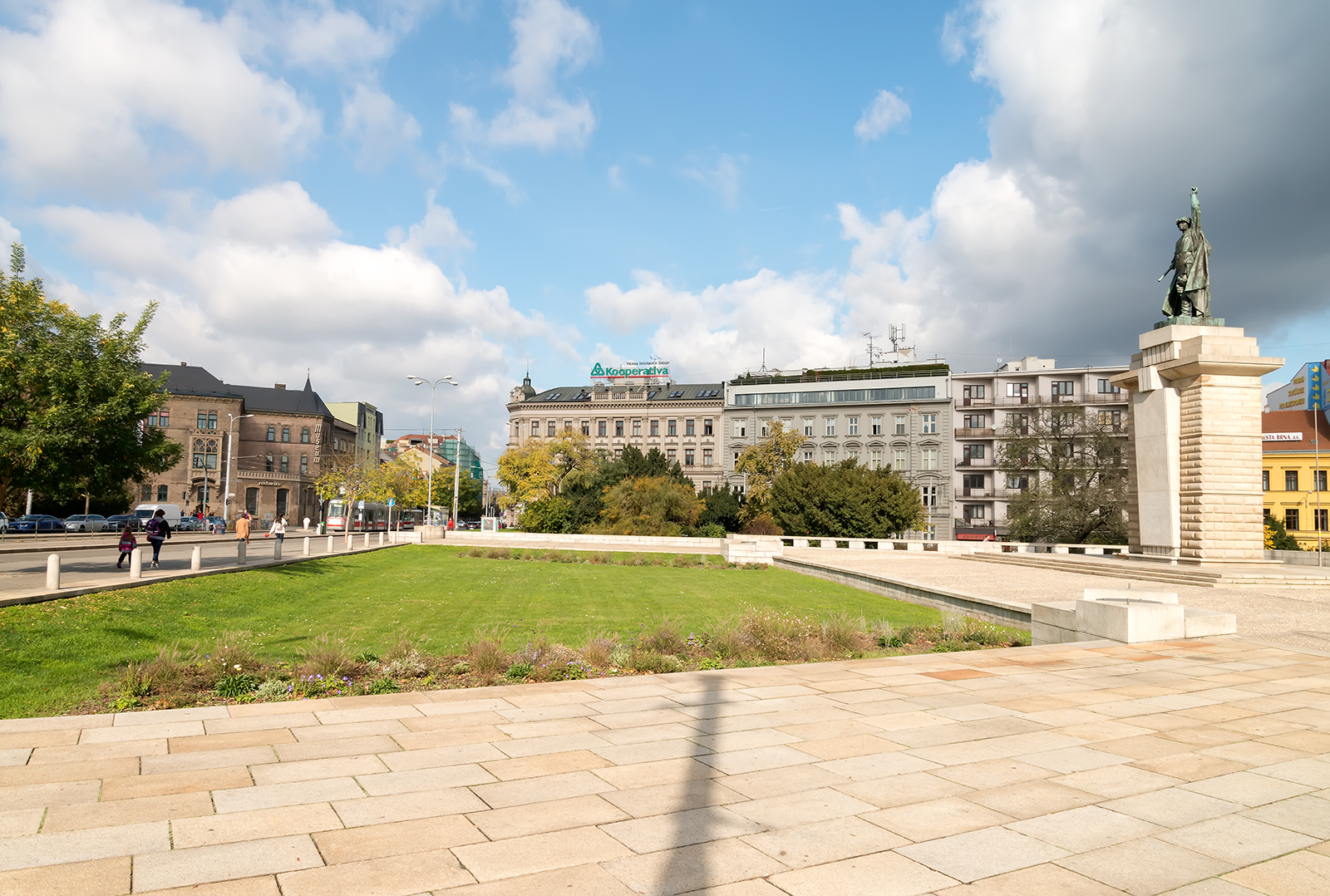 The Red Army memorial or ‘Memorial to the Red Army’s Victory over Fascism’ has stood on the eastern side of the square known today as Moravské náměstí since 1955, when it was ceremonially unveiled on the occasion of the 10th anniversary of the country’s liberation from fascist occupation. The triangle of land hemmed in by the tram lines along the roads Lidická and Milady Horákové forms a link between the adjacent Koliště park and the western side of Moravské náměstí, originally the site of the German House, which was demolished soon after the end of the war in 1945. This whole area, where the old city walls once stood, was transformed into a circular grand boulevard with a ring of parks at the end of the 19th century. The preparations for the public monument space with memorial crowned by a heroic bronze statue of a soldier was the work of three people: the sculptor Vincenc Makovský, who had returned to Brno after the war; the architect Bohuslav Fuchs, who was at that time dean of the Faculty of Architecture and Construction Engineering; and Antonín Kurial, a professor of architecture at the faculty, who, several years earlier, in 1946, had designed a memorial in the Brno district of Nový Lískovec to the victims of the Second World War.

The monument is set in Bohuslav Fuchs’s architecturally designed space arranged in the shape of the letter V, rounded at the tip. The wings of the V, which are the two main axes of approach, point towards the western side of Moravské náměstí. The memorial is bounded by a system of open, geometrically shaped balustrades combined with low granite walls, which vary in height according to the terrain. Several bollards line the edge along Lidická street. The stone bases for public lighting pylons, the monumental decorative vases for flames in the corners, the open lawn area, and the traditional, robust and enduring materials all contribute to the space’s distinctive ceremonial character.

The plinth of the monument, which was designed by Antonín Kurial, stands at the centre of the triangle on a low pedestal of three steps in the form of a rusticated block that is horizontally divided by several cornices. Vertical lines are created by a narrower raised block of white stone forming a central column, upon which Stalin’s military order to liberate Brno was carved, crowned with a relief wreath containing a hammer and sickle. The realistically depicted bronze sculpture of a Red Army soldier with a raised left arm and a right arm holding a ceremonial standard is turned towards the square and symbolizes the decisive gesture silencing the guns of war.

Since 1958, the memorial has been designated an immovable cultural monument. It originated in the early 1950s, which was the harshest period of communist rule, a time when socialist realism was the officially prescribed and the predominant form of art. The monument was used extensively for official occasions and ceremonies of the regime in the post-war years. Because of this, in the post-communist era, it became a symbol of despised totalitarianism and its possible removal was the subject of much discussion. It has undergone a number of subsequent modifications, the most notable of which was the removal of the inscription of Stalin's order from the white stone. The sculpture was taken down in 2013 for restoration and later returned to its place.