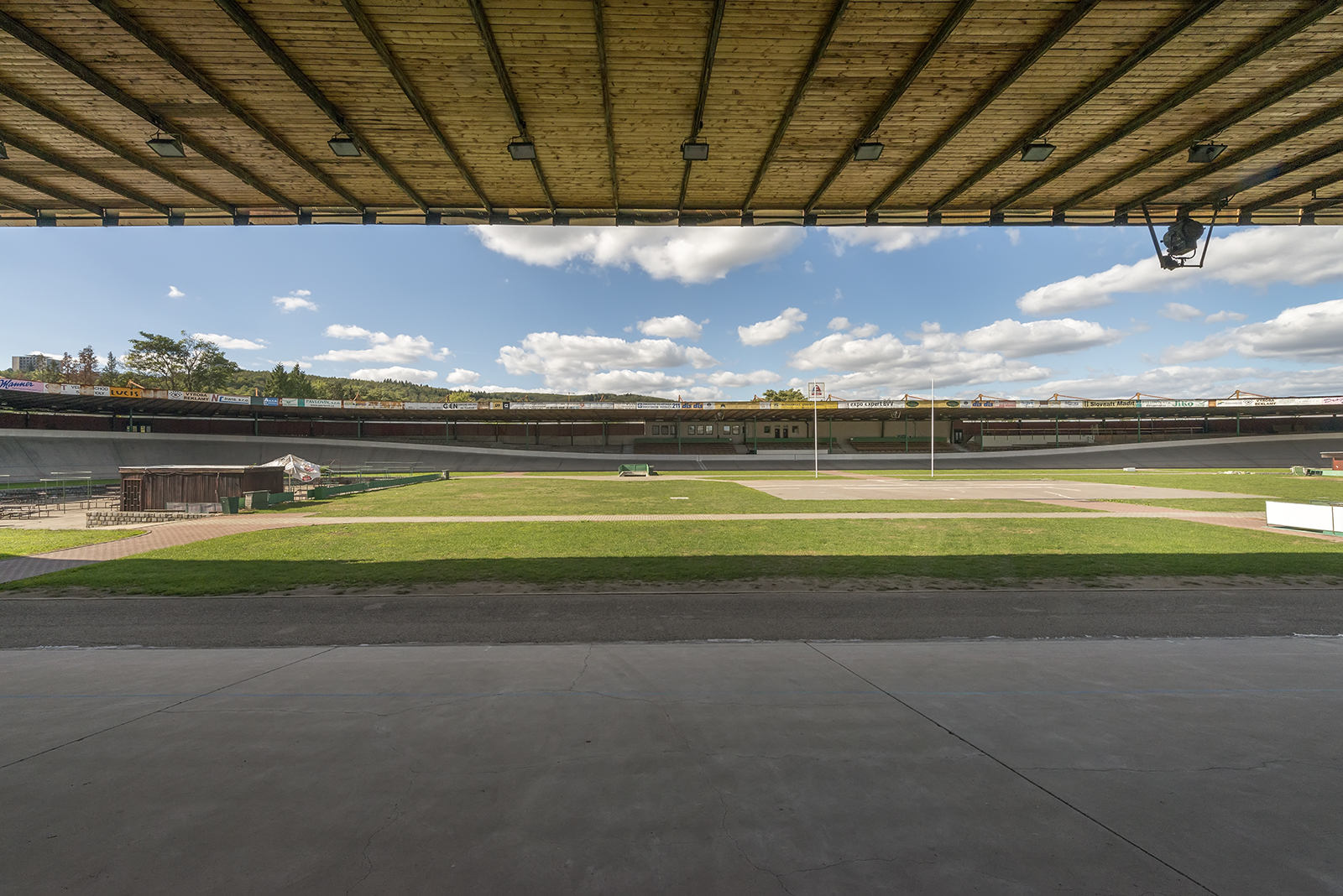 The history of the Brno Velodrome goes back to 1889 when an earth cycle track was established on the site. The track was known as Baurák, after its founder Viktor Bauer who also owned the surrounding land. In the 1930s the Velodrome with a playing field was supplemented with several constructions, including a music pavilion. As there were the Schreber gardens spreading to the east, the entrance was placed on the north-west side and the start point was in the western part of the track. During the Second World War the track was confiscated by the German administration, and after the war it was used by the Sokol Union III until the All-Sokol Assembly in 1948.

The first post-war modifications started in 1951 when a six-metre wide  asphalt track designed by the engineer Jaroslav Chlubna was laid, with the help of volunteers. This track, which proved slow and dangerous owing to its rough surface, was provided with a safety barrier, a PA, changing rooms with toilets, tribunes and lightings on tall iron posts. The Velodrome complex then sprawled to the east, to the former garden colony. A smooth concrete track seven metres wide with a stone base making the bends more elevated was built in 1957. At that time the Velodrome was administered by the newly established Favorit PE union which considerably profited from the large numbers of visitors in the following years. As a result, plans were discussed for the construction of a roofed track which could host the world championship in 1969.

In 1967-1969 the Brno Velodrome underwent a general overhaul in two stages, the overall design for which was produced by the Stavoprojekt company. The first stage saw the construction of the main building with offices, a restaurant and social areas while the old changing rooms with toilets were expanded. A building with offices, workshops, pits for motor vehicles and a gym with toilets was built in the west section of the complex. Engineers Karel Cibula and Jaroslav Chlubna redesigned the cycle track, which was expanded to eight metres and shortened to 400 metres. The track with the decline of 34 degrees was provided with a three-metre safety asphalt belt on the inner side. An underpass and an entrance from the west were created below the track level.

During the second building phase the Velodrome was roofed and fitted with new lighting, boxes for radio and TV crews were installed and the complex was fenced. A cycling village with a reception, social premises, storage rooms, a minigolf course and a sauna was then established south of the Velodrome; it currently provides accommodation for the public.

The present form of the Velodrome with its facilities and roofing is the work of architect Mojmír Korvas. Professor Ferdinand Lederer, head of the Department of Steel Structures at the Brno VUT, and engineer Jiří Lefner, a constructor of the bridge department of the Královopolská strojírna factory, were in charge of the construction and structural design of the steel frame carrying the roof. The Královopolská factory manufactured the individual sections of the steel frame which were transported to the Velodrome where they were assembled by experts of the Chemont Brnocompany in a record time, under the guidance of Josef Ulč Sr.

Above the track and the tribunes is a flat roof the inclination of which is slightly sloping towards its outer side. The different height of the tribune base affected the height of the individual pillars that are symmetrically placed along its external and internal edge. These pillars supporting the roof truss are anchored in the retaining walls and the ferro-concrete foundations of the hall. The outer circles of the pillars make up the frame of the perimeter walls of corrugated metal. The truss frame carrying the cardboard roofing on a wooden base exceeds the tribune, thus also roofing the  cycling track.

Soon after the roofing was completed there emerged flaws in the material, and the tribune started to leak. These defects were eliminated in the 1970s, when the roofing and the base were restored. The original steel frame of the roof has survived, and the surface corrosion in places does not affect its function. The colours of the individual construction elements with tones of white, grey, brown, orange and yellow are not original. The more recent illumination of the track with spotlights suspended from the roof girders does not visually interfere with the construction; the elongated lighting fixtures above the tribunes are original. The ferro-concrete tribune has only part of the seats preserved; they were designed by Korvas as well. The period ornamental iron fitting on the gates of the main and side entrance is also applied in a section separating the tribune from the entrance to the restaurant, which now functions as a music club known as Favál, after the slang term denoting the Velodrome.

The Brno Velodrome is the oldest preserved cycling track in Europe. Unfortunately, plans are being prepared for its demolition as the concrete track and the roofing do not comply with modern cycling standards. Another fully-roofed velodrome is planned in Brno – Komárov, with a track made of wood and the standard length of 250 metres.