Administrative and operations building of Ingstav 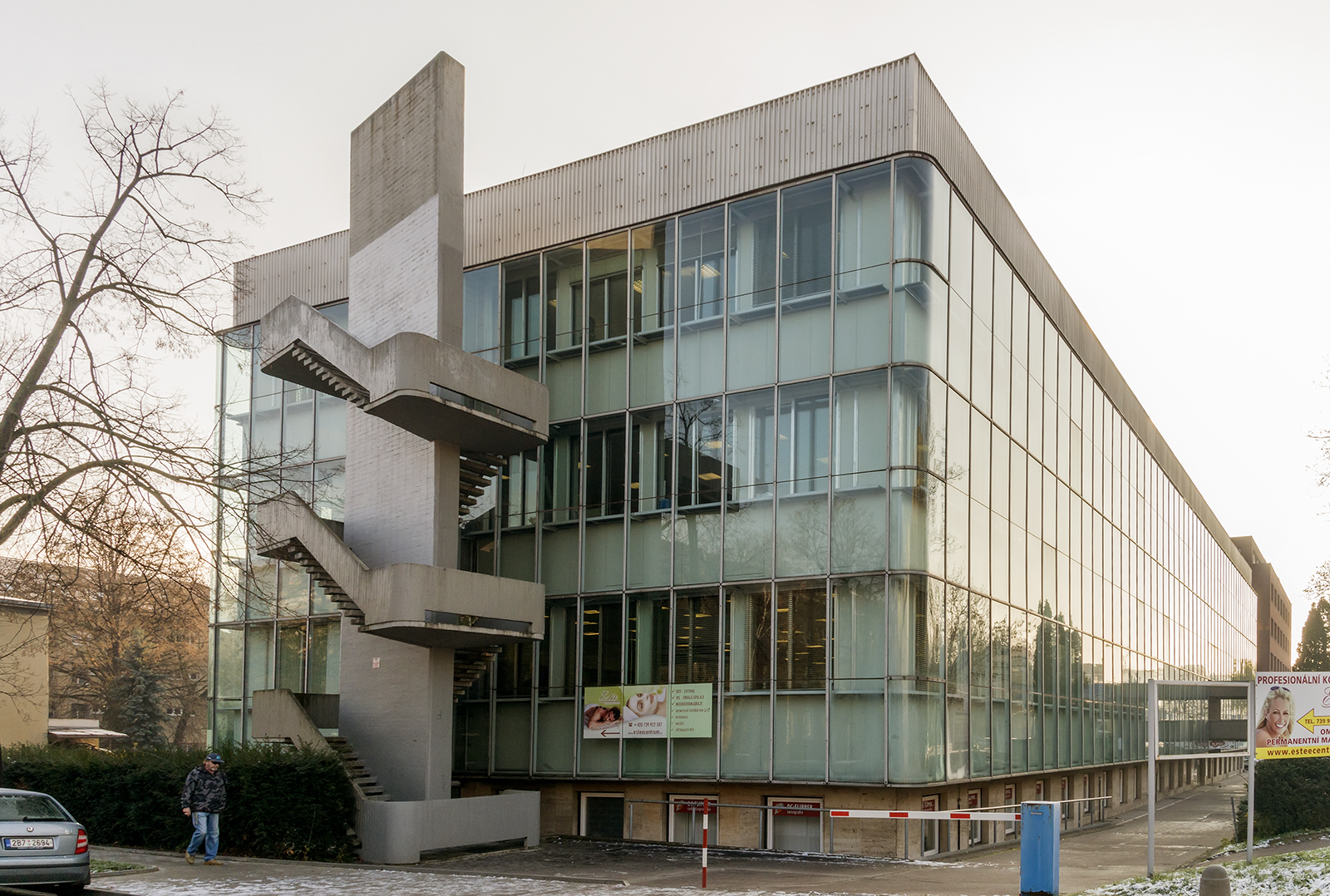 The administrative and operations building of Ingstav, which was a national construction company, is without doubt one of the most significant buildings not only of the 1960s, but of the entire post-war period in Czechoslovakia. The design was drawn up by the Brno architect Ivan Ruller in 1968, who had, shortly prior to that, been working on the interiors of the Janáček Theatre and the project design for the Slovnaft vocational school in Bratislava. This office building was a reaction to brutalist architectural tendencies abroad and the modernist traditions of Brno, and was completed two years later, in 1970. Situated close to the busy main road of Vídeňská, the Ingstav building was remarkable for its structural and technological innovations, its elaborate layout, its use of fine materials on the façade, and its natural deployment of works of art both inside and outside the building.

This rectangular four-storey building has a ground floor that is slightly sunken below ground level. It is characterized by coloured double-glazed facades with organic rounded corners. With the clear intention of soundproofing the office close to the busy road and creating a more favourable working climate, Ruller placed another, fully glazed, suspended front façade, segmented only by subtle aluminium profiles, in front of the steel structure of the building. Thus, viewed from outside, he achieved a slighly three-dimensional effect, while maintaining a distinctive overall transparency. The top floor of the building, where the boardroom and offices of directors and other high-ranking officials were located, is slightly set back in comparison with the other floors, and is highlighted by a regular pattern of protruding aluminium slats. The accompanying elements create a contrast with the visually delicate and smooth main facades. One of them, on the north side, is a concrete fire escape with a dominant high wall separating the flights of stairs; another is the monumental block on the eastern side, in which the architect situated connecting stairways, bathroom facilities, changing rooms and archives. The grandeur of the artistically designed main entrance from the street at the level of the first floor is accentuated by the substantial protruding concrete and steel awning designed by the sculptor Milan Buřival.

For the second and third floors of the Ingstav building, Ivan Ruller designed large open-plan offices covering the space of the entire floor. These were creatively divided into irregular individual minor formations separated by screens or plants to avoid excessive de-humanization of the work space. In the Czechoslovakia of the 1960s, the idea of such open-plan offices was quite unusual. It was inspired by the configuration of the Baťa administrative building in Zlín by Vladimír Karfík from 1938, and also by the contemporary German concept of Bürolandschaft. By contrast, the space of the smaller top floor, occupied by Ingstav’s executives, was traditionally divided into individual offices.

As with his other projects, Ivan Ruller worked closely with outstanding artists on the Ingstav project. The purpose of their work was to harmoniously enhance the entrance foyer (the polychrome wooden relief by Zdeněk Macháček and Pavel Navrátil), the director’s office (wooden relief wall by Vladimír Preclík and a painting by Janos Kubíček) as well as the open-plan offices (accessories and ceramics by Božena Matalová). Instead of the originally planned exterior sculpture by Eva Kmentová and Olbram Zoubek by the main entrance, a vertically segmented work in concrete was used, which Ruller helped create in collaboration with his long-time colleague Milan Buřival.

The former Ingstav premises are still used as an office building. Since 1993, it has been home to LCS Business Centre. However, in the years following the fall of the communist regime, it has undergone a number of modifications. The original concept of open-plan administrative space covering the entire floor, which was unique for its time, has disappeared. Also, the original glass of the suspended facades has been replaced with glass of a darker hue. Furthermore, the exterior of the building and the area around it is overwhelmed with the smog of visual advertising. Nevertheless, the overall proportional design of the building, the sculptural concrete fire escape, the travertine cladding of the ground floor, the front tower with stairways, and the exterior sculpture have all been preserved to this day, as a reminder of the exceptional sophistication and quality of this project by Ivan Ruller.