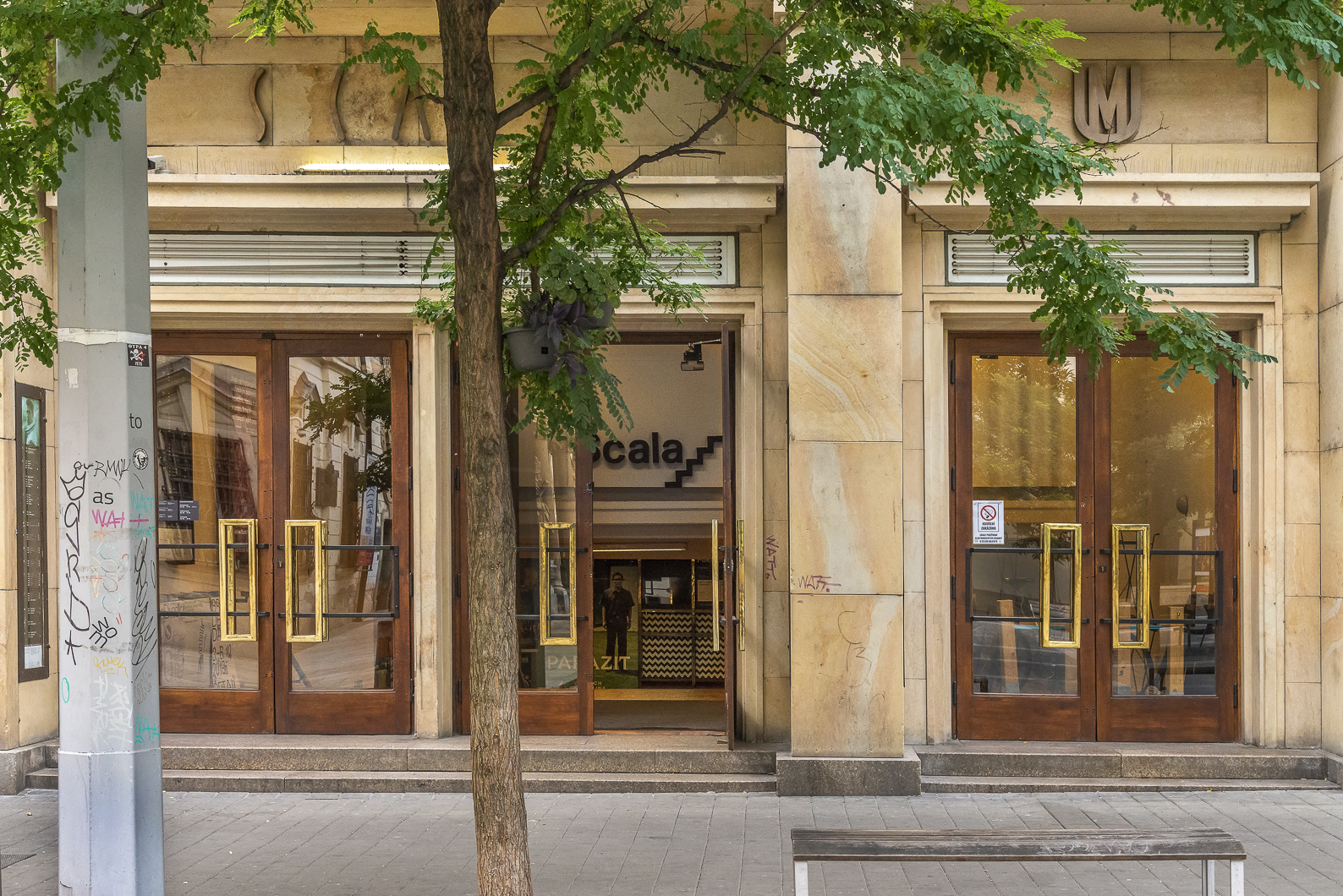 More photos (9)
In the years 1926–1927, the Cooperative of Employees of Commerce and Industry (DOPZ) built its headquarters on the square Moravské náměstí. The design is usually attributed to either to Zikmund Kerekes, a architect of Jewish descent who settled in Brno, or to the Prague architects Otto and Karl Kohn. In addition to offices on the upper floors, this multi-purpose administrative and social building also housed a ballroom, which was used for balls, theatre events and lectures, especially by the left-wing Brno intelligentsia led by the Left Front organization, centred around the literary scholar Bedřich Václavek. From 1928, the first and second floors of the DOPZ Palace were home to the famous Café Biber. In December 1929, the Bio DOPZ Cinema opened in the basement of the building, boasting the largest auditorium in Brno, for 800 viewers, and the best technical equipment. In its early years, the cinema was very successful and, in the years 1931–1932, the auditorium was enlarged to accommodate 1,012 viewers, the foyer was converted into a waiting room, and a smoking lounge was also created. In 1935,  the name of the cinema was changed to Scala for marketing reasons. At the beginning of the Second World War, the cinema mainly screened newsreels and then it closed with the arrival of the front in 1942. At the end of the war, the whole street front in that part of Moravské náměstí was destroyed by fire including the DOPZ Palace. However, the cinema in the basement survived the fire and operated almost without interruption from that time, later renamed Moscow under the communist regime.
At the beginning of the 1950s, a magnificent three-storey neoclassical administrative complex of buildings with the design offices of Hutní projekt [Metallurgical Design] was built on the site of the destroyed DOPZ palace. It was designed by the Brno architect Lubomír Lacina and is one of only a few buildings in the very centre of the city in socialist realism style. The middle part of the facade, which projected out from the side wings of the complex in a shallow avant-corps, was adorned with a tall stone portico and dark roughcast plaster decorated between the windows with figural relief plaques with motifs of workers and the intelligence of the working class  (mining, construction, chemistry, engineering, automotive industry). The right wing of the complex was also decorated with a stone socle and relief decoration above the windows (some of which have been transformed into shop entrances) depicting agricultural and industrial tools or weapons. Above the cinema entrance was a massive rectangular stone portal with an iron plaque with the emblem of Hutní projekt, and there were also two female figures fashioned in iron, one with a child, the other holding a sheaf of wheat in her arms. The authors of the sculptural decoration were the architect’s sister Sylva Lacinová and Jiří Marek. In the central part of the complex the Cinema Moscow continued screening and was converted to widescreen in 1957. The number of seats in the auditorium was also reduced from 1,012 to 750 (550 on the ground floor, 200 in the gallery) and the ticket offices were also moved from under the stairs to the vestibule. Another reconstruction of the interiors commenced in January 1971 to a design by the architect Jaroslav Šmídek, during which the cinema was modernized to facilitate the projection of 70 mm films. The ticket offices were relocated opposite the entrance staircase and the smoking lounge was converted into a snack bar. The seats in the auditorium were also replaced and their number was reduced to 473 (328 on the ground floor, 145 in the gallery).
After the Velvet Revolution, the cinema went back to its original name of Scala and was operated by the municipality. The cinema’s interiors retain their original 1970’s character, and, with the advent of multiplexes, it was threatened with closure. In the end, it closed for two years. In 2013, Masaryk University took over the running of the cinema from the city. The university now operates the first university cinema in the country and its students help determine the programme. In addition to film screenings, including premieres, it is also a venue for lectures and opening ceremonies. The complex of buildings is still well preserved (apart from the alterations to the shop fronts), and, today, this socialist realism style building is a cultural monument.
MŠ, LV