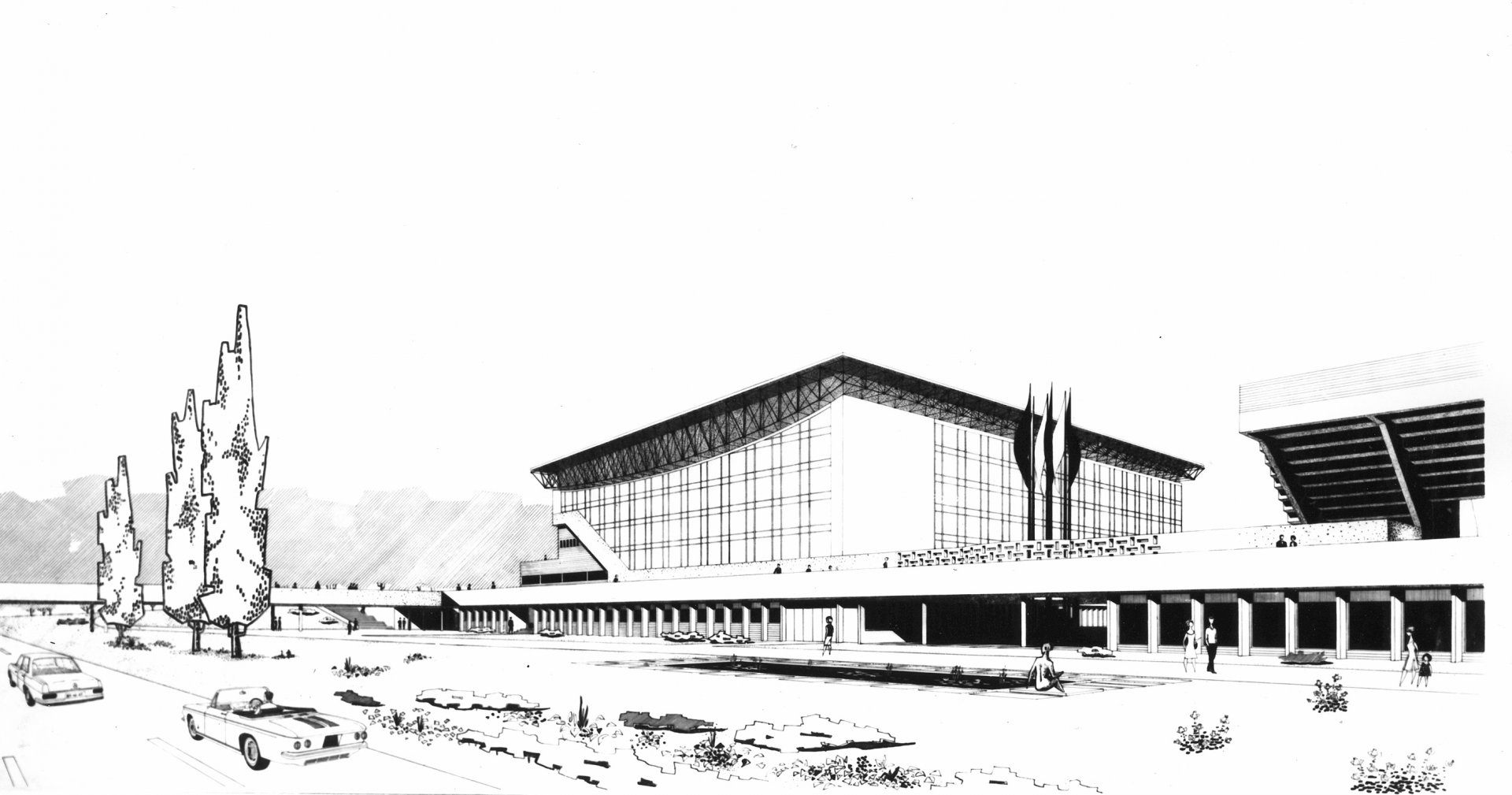 More photos (9)
In 1952, both indoor and outdoor swimming pools were envisaged for the Za Lužánkami Sports Complex. Brno not only lacked water facilities for sports (e.g., a 50-metre swimming pool, as required by the world swimming federation FINA), it also needed to extend the opportunities for recreational swimming among the general public and to train children, young people and non-swimmers, as at that time around sixty percent of the population was unable to swim. While the demand for open-air swimming for recreational purposes could be met by Brno Reservoir, the lack of indoor facilities, with only the pools on the streets Ponávka and Rašínova, was felt more keenly.
The investment plan envisaged not only an indoor swimming pool measuring 50 x 20 metres with a stand for 4,000 spectators, a gym and lodgings, but also an outdoor swimming pool with two sports pools and an outdoor stand. In the course of 1966, Stavoprojekt Brno prepared the project documentation based on the results of an anonymized internal competition, in which the design of architect Otakar Oplatek was chosen from seven entries. Earthworks began on the site in the summer of 1967 and construction ceremonially commenced with the concreting of the foundations in May of the following year.
Taking into consideration its position on the land, the indoor hall of the swimming pool was designed with three levels according to operational function. The main entrance was situated on an elevated terrace and led directly to the central hall on the second floor, from where swimmers could access the changing rooms. There was also cafeteria (milk bar) with a large window onto the main pool (measuring 50 x 21 metres). From this level, it was possible to go upstairs to the spectator stand or descend to the first floor to a small swimming pool for beginners (measuring 8 x 16 metres) and administrative and technical facilities. However, for operational reasons, the stand could also be accessed from a separate entrance outside via a system of terraces and staircases. The stand could accommodate 1,500 spectators during swimming and diving competitions. The central swimming hall, glazed on two sides, was connected to the neighbouring gymnastics hall via a complex of treatment spas and to the adjoining area of ​​the outdoor swimming pool through the south facade. Here, the outdoor stand for up to 5,000 spectators blocked of the complex from traffic noise and also contained changing rooms and a service facility, and had a separate entrance from outside.
The striking structural elements visible on the outer facade of the swimming stadium came to define its architectural expression, such as the pronounced incline of the spectator stand of the indoor pool and the concave curve of the lattice roof structure by Ferdinand Lederer, designer of the winter stadium roof. The morphology used here, such as the projecting line of the roof, the contrast between the full outside corners and the glazed facades, and the accentuated vertical segmentation, bears a direct resemblance to one of Otakar Oplatek’s earlier projects, Brno’s Janáček Theatre (1958–1959). With the motif of placing parts of buildings on a raised plinth with a system of continuous terraces that lead the visitor through the entire complex (sometimes indirectly and over great distances), both of these buildings are similar to his other Brno works, i.e., the unrealized design for the Riviera lido (1972) and the complex of the cleansing and treatment spa on Hybešová street (1968).
After many delays in construction, primarily due to the properties of the foundation substructure and the complexity of the engineering and technological methods for specific operations, the first phase of the swimming stadium complex was completed significantly behind time in early 1979. Nevertheless, the completion of the indoor pool helped to increase the required period norm related to water area per resident of the city to around 25%. Although this figure was still short of the needs of the city, and although, in terms of capacity, the technical facilities of the pool were designed to take into account the subsequent construction of an outdoor swimming pool, the second phase was never implemented.
With the new political regime after 1989, as with other facilities of the Za Lužánkami Sports Complex, the swimming stadium was privatized. However, the new private owner proved unable to maintain the pool’s demanding operations for more than a decade and in 2004 it was bought back by Brno City Municipality. The city realized that in the case of its only fifty-metre pool, maintaining the swimming stadium was a priority, even though it required considerable investment. In the years 2010–2013, the complex underwent a phased reconstruction, in which the facade glazing and windows were replaced. The changing rooms and sanitary facilities were also renovated and essential modifications were made to the roof. The city is now preparing an extension to the swimming stadium in the form of a new twenty-five-metre pool, but unfortunately there was no public and open architectural competition for the design. This course of action, along with the design’s architectural quality, has been criticized by architectural professionals, as it may mar the appearance of the whole complex.
ŠS