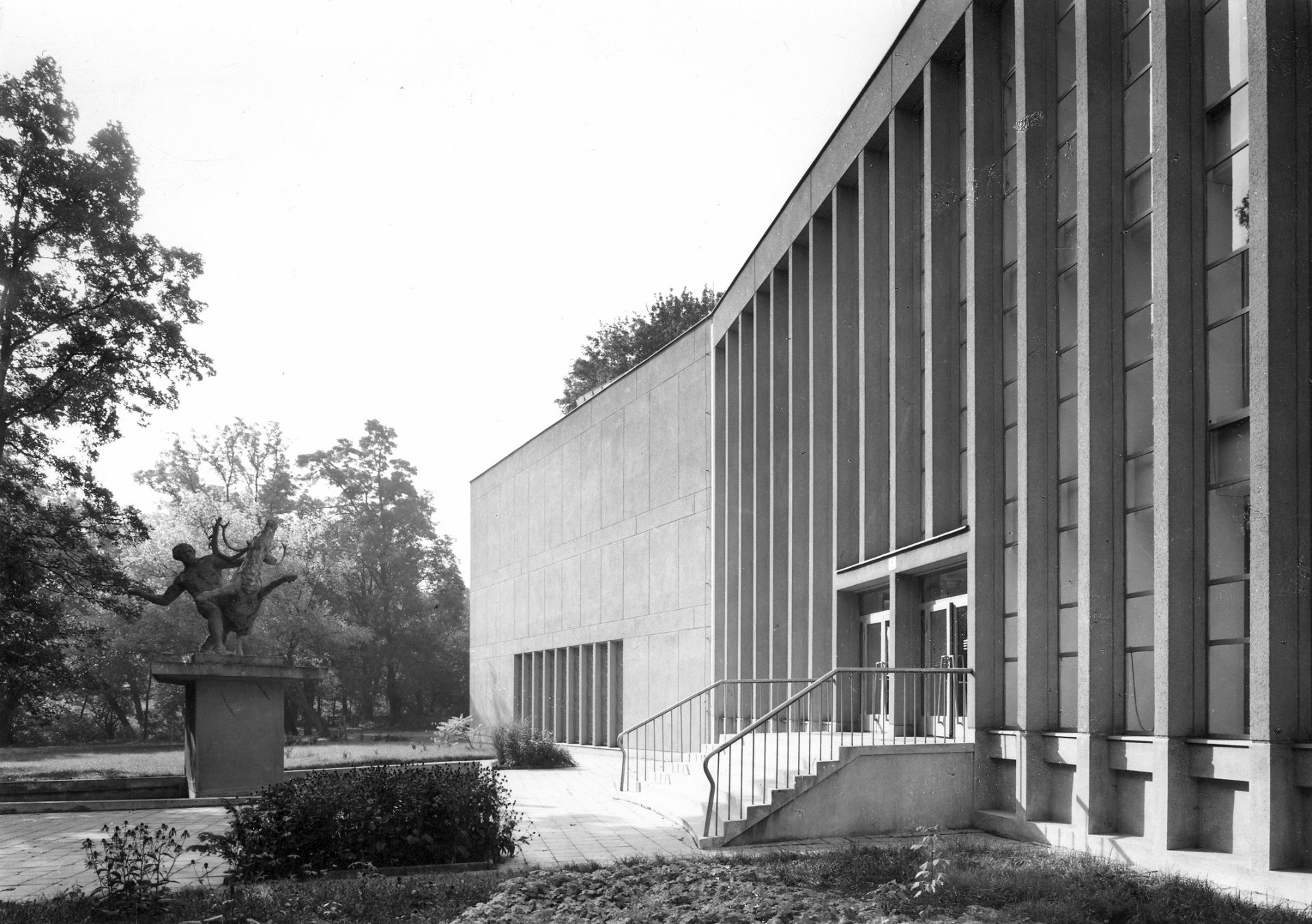 More photos (7)
The main impetus behind the construction of the new Anthropos museum building was the prominent Czech anthropologist and museologist Jan Jelínek. At that time, he was director of the Moravian Museum and wanted to continue the First Republic research and collection of Karel Absolon and his Man and his Ancestry Pavilion, which was destroyed during the Second World War. The earlier pavilion opened in 1928 as part the Exhibition of Contemporary Culture at Brno Exhibition Centre and there it continued as the first Palaeolithic museum in Czechoslovakia up until 1945. Karel Absolon had managed to acquire an extraordinarily wide ranging and precious collection of artefacts and anthropological replicas, most probably the largest of its kind in Central Europe.
The neo-functionalist Anthropos Pavilion in Pisárky Park was built between 1956 and 1958 to a design by the Brno architect Evžen Šteflíček (a pupil of Jiří Kroha, who along with Absolon designed the original pavilion at the exhibition centre). The pavilion was constructed as part of ‘Initiative Z’ and it was not fully completed until 1962. However, the first exhibition entitled The Rock Painting Art of Primitive Society opened to the public in 1961. It was followed by a series of exhibitions presenting the earliest history of settlement in Moravia and Europe.
The basic structure of the pavilion was a reinforced concrete skeleton, consisting of thirty-eight pillars and sixty-eight iron columns within the building. The floor plan was sharp-angled with a round double-flight staircase in the middle. The original, almost fully glazed front and rear facades were divided by a regular vertical pattern of subtle pillars. The individual floors intertwined with the galleries, which made it possible to place the main exhibit, a life-size mammoth that was the work of Jan Jelínek and Brno sculptor Zdeněk Macháček, in the central glazed hall of the building. The mammoth was based on an older version from 1928, which was presented by Karel Absolon at the original pavilion in Brno Exhibition Centre and was destroyed by the Red Army at the end of the Second World War. In addition to exhibition spaces, the new Anthropos Pavilion had other museum facilities, such as storerooms, a depository, an archive and offices.
Initially, Anthropos had limited year-round functionality because of its technical shortcomings, such as problems associated with heating the glazed building, and therefore had to undergo a series of repairs in the 1990s. In the years 2003–2006, it underwent a complete reconstruction based on a design elaborated by the architect Dagmar Kubeláčková. Her design, inspired by postmodernism, significantly changed the original character of the building, especially the front facade and the rear glazed facade. As a result of the reconstruction, the sculpture Lovec sobů [Reindeer Hunter] by Antonín Širůček from 1961, which had originally stood at the entrance to the pavilion, was moved further into Pisárky Park.
This modernization led to the creation of new exhibition spaces with appropriate climatic conditions for the exhibits, a lecture hall in a 3rd floor extension, and a café and amenities for visitors. This modern institution with its collection and exhibition is part of the Moravian Museum and focuses not only on presenting archaeological finds from the Paleolithic period, but also on interdisciplinary projects in the field of cultural anthropology and ethnology.