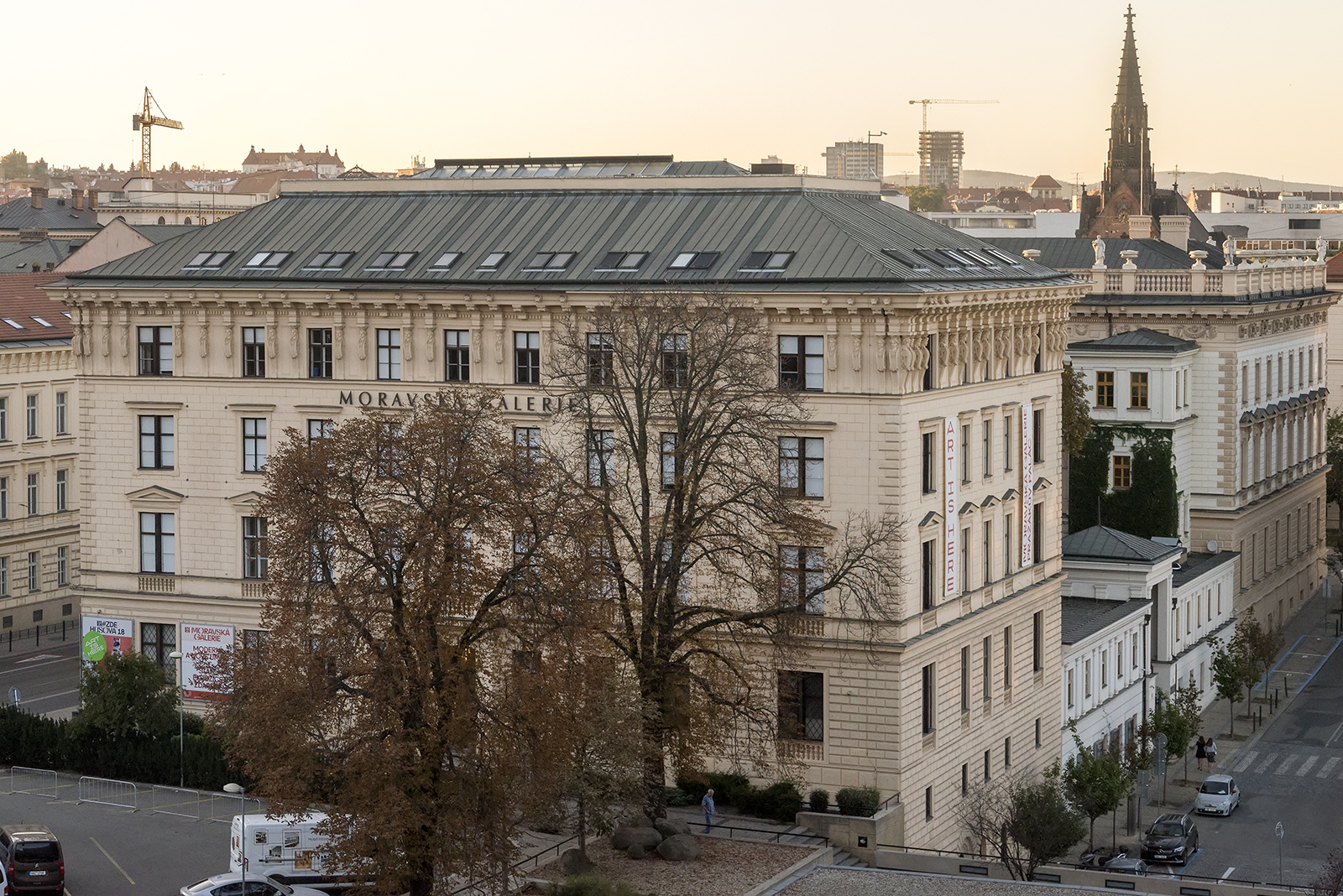 More photos (1)
To have an apartment building built on Brno’s new Ringstrasse [ring road], on the boulevard Eliščina třída, was a matter of great expense and prestige. The client in this case was the prominent Moravian politician, nobleman and lawyer Alois Pražák (1820–1901), who was also a leading representative of the National (Old Bohemian) Party in Moravia. For this project, he commissioned the prominent Viennese architect, Theophil von Hansen, who in his design for the Pražák Palace followed on from another of his works, the neighbouring grand palace Besední dům, and joined the two buildings into a unique Neo-Renaissance ensemble. The segmentation of the building’s facades with stucco decoration and its distinctive crowning cornice draws inspiration from the architecture of Tuscan palaces. The building was renovated at the end of the 19th century.
After the communist coup of 1948, the building was confiscated and became the property of the state. The lady who had inherited it was only allowed to keep one apartment and the others were either rented out or converted into offices. In 1985, responsibility for the building was transferred to the Moravian Gallery in Brno. Although a few minor repairs were done in the 1980s, the lack of funds for restoration left its mark on the cultural monument. It was subsequently decided that the building would be reconstructed and adapted for the new purpose of a picture gallery, but work did not begin until 1990. The eventual reconstruction was entrusted to the architects Zdeněk Michal and Jiří Kopřiva. They needed to address the disarray in the overall appearance of the building due to inappropriate renovations (e.g., knocked through door and other openings, removed original historicizing elements, such as floors and brass door fittings, etc.). The only surviving aspects of its original late 19th century appearance were the pilaster entrance hall, the garden salon and the area of the staircase. The architects were therefore required to tackle a number of important problems during the reconstruction, such as removing the side entrances on the east of the building, dealing with the problem of damp, repairing the plaster and the roof, and preserving all the original elements of the building. Above all, the operation of the art gallery required attention, as the display halls were formerly arranged in series of back-to-back corridors. The official public opening of the exhibited collections of the Moravian Gallery in Pražák Palace took place on 25 November 1993.
The building underwent further renovations in the period 2001–2002 and in 2015. During the most recent changes, elaborated by architects from Petr Všetečka’s TRANSAT studio, a slide was installed, which allows visitors to ‘slide through time’ from the exhibition space on the second floor to the exhibition space on the first. The south-facing main entrance was also relocated to the courtyard, which is now used as a space for displaying sculptural works, as an outdoor café area, and as a venue for ceremonial exhibition openings. Pražák Palace has a large exhibition space, featuring permanent exhibitions on the first and second floors and temporary exhibitions in the atrium and on fourth floor. It also houses Moravian Gallery headquarters and a specialist library with study room. Unusual features of the museum building are the open, publicly accessible depository of sculptures on the ground floor and the special playroom for children, designed by the artist Vendula Chalánková. In 2014, the original restorer’s studio in the courtyard of the gallery was converted into a new variable cultural space with a gallery café named Praha by the 4AM  Forum for Architecture and Media to a design by the architects Jakub Kopec and Jaroslav Sedlák. Up until the end of 2019, Praha was an important lecture and exhibition space. The venue hosted lectures on architecture, art interventions, workshops, happenings, discussions and forums, audio-visual screenings and symposia, as well as concerts of electronic, improvised and contemporary classical music, dance improvisations, and authorial and experimental theatre. Since 2020, the space has been used as a gallery pub called U Pražáků.
PR