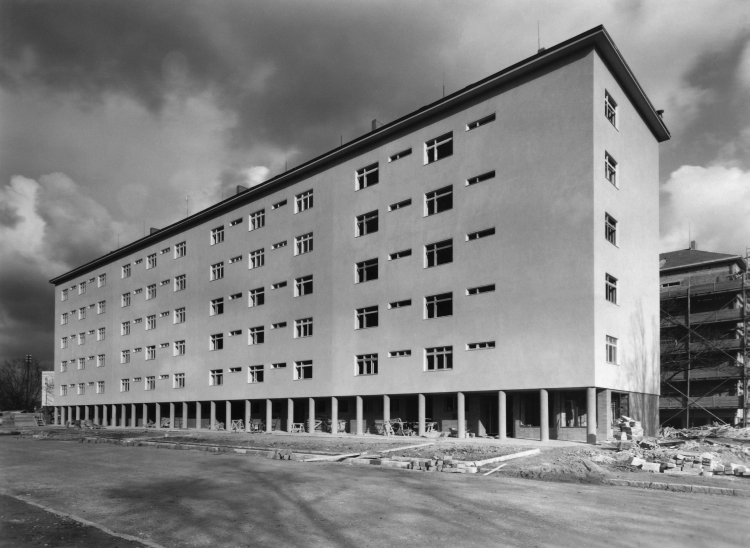 More photos (5)
In Czechoslovakia, during the Second World War, Brno was among the cities that sustained the most damage, predominantly caused by Allied bombing raids towards the end of the war. Post-war reconstruction also required the construction of new housing. Resolving the severe housing shortage was one of the priorities of the new leadership of the city of Brno. Housing construction was also a national priority in the framework of the two-year economic plan announced by the government in October 1946, and thus the term ‘two-years apartments’ came to be used for housing developments from that time. The housing estate on Tábor street is one of the finest examples of housing construction from this period in the country.
This housing estate amalgamates the rich experience of all three of its architects and bears the hallmarks of quality pre-war housing construction. This is evident not only in the layout of two- and three-room apartments, which also had large halls, loggias, and bathrooms with bath, washbasin and bidet, but also in the facilities of the apartment buildings. In each of the six apartment blocks, there was a laundry room and an ironing room, and the individual entrances had a spacious hall and a lift. Along the entire length of the west side of the block there was a covered colonnade, forming a continuous outdoor corridor connecting the individual entrances to the building. There was a small maintenance room at the end of each side of the block.
This kind of terraced apartment block, which is rooted in pre-war housing construction, was used by Jindřich Kumpošt not far from this particular development. Experimentation with these kinds of rows of buildings was meant to help solve the hygienic shortcomings of the block configuration of buildings, especially in relation to sun exposure and the ventilation of apartments. The architects of the housing estate also paid particular attention to the form of the public space between the blocks, which consisted of a shady park with benches, playgrounds and a paddling pool. The housing estate on Tábor indicated trends that would determine the later direction of socialist housing construction, which, however, was often devalued by the prioritizing of quantity, the limitations of prefabricated panel construction technology, and poor quality implementation.
Another part of this project was the building of two blocks on the opposite side of the park on the corner of the streets Klusáčkova and Kounicova. However, these buildings were not designed by Kuba, Kroha, and Polášek, but by the Building Authority of the City of Brno.
Between 2010 and 2011, the buildings on the housing estate underwent a gradual revitalization, which diminished their original effect. Nevertheless, in spite of their altered form, along with the pre-war buildings, they constitute a very valuable architectural and urban complex.