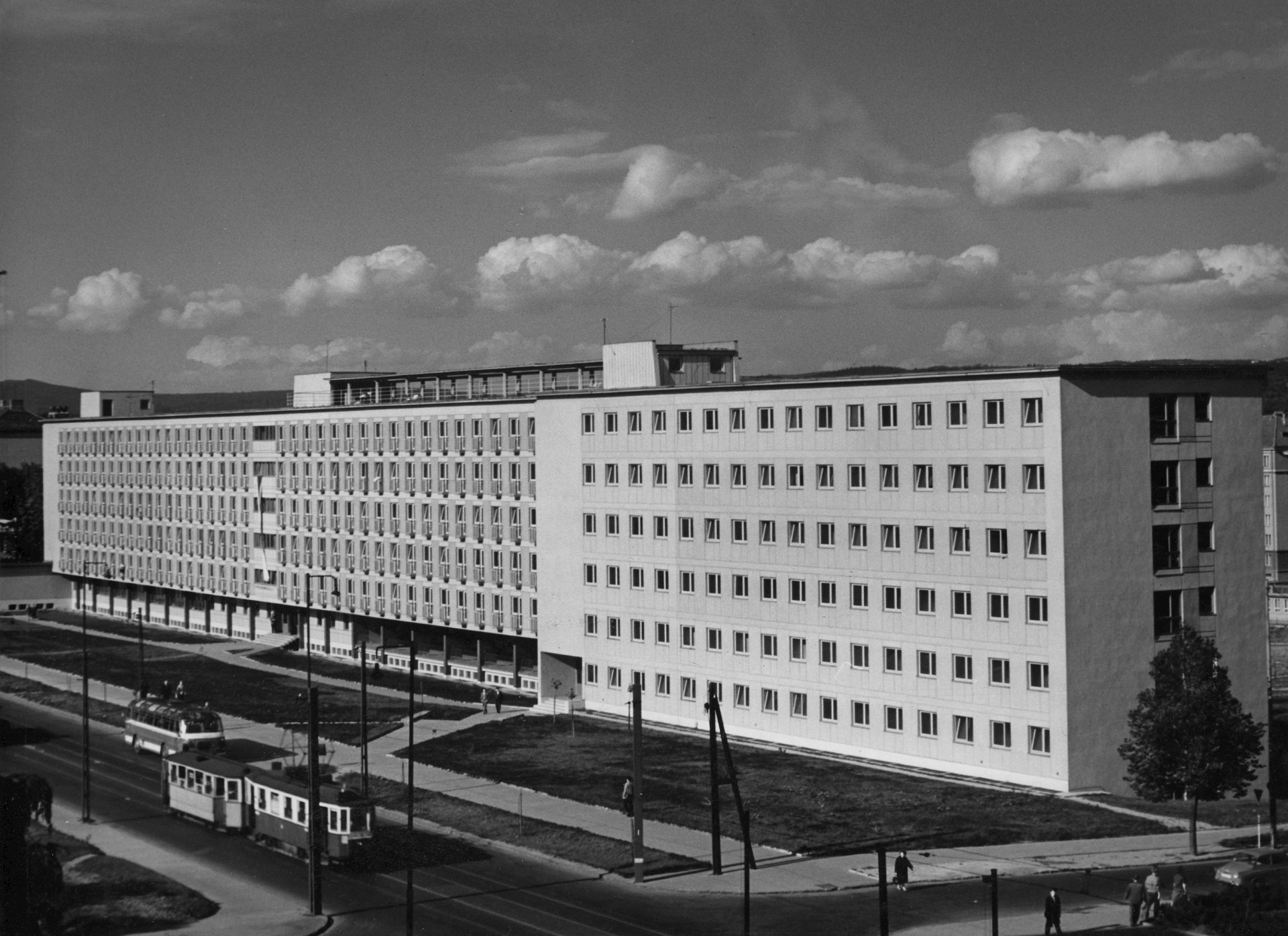 More photos (7)
Accommodation for students in the university city of Brno after the Second World War was completely inadequate in terms of capacity and hygiene. The student hall of residence on what was then Leninova street to accomodate 1,000 people was meant to make a significant contribution towards solving the problem. The design of the complex, from 1961, was by two architects from Stavoprojekt Brno, Milan Steinhauser and Mečislav Borecký. It was built in two stages, the first of which was the construction of the student hall of residence and refectory in the years 1962–1963, named after the founder and creator of the Czechoslovak electrification system, Vladimír List. Hotel Družba was added to the complex in the period 1963–1965.
The six-storey block, almost 200 metres long, was sunk below ground level. The monolithic nature of the block was disturbed by the pattern of subtle balconies projecting from the façade and, above all, by the empty ground floor supported by columns and the sun terrace on the roof, which were built in accordance with Le Corbusier’s modernist principles. In the northern part of the complex, there was a two-storey refectory building, which stood on an empty ground floor supported by double columns in ‘Brussels-style’ V shapes. Standing in contrast to the vertical line of the block is the adjacent thirteen-storey Družba building with its significantly segmented facade of loggias. This offered hotel-type accommodation that was used not only by students but by visitors to Brno trade fairs. Soon after it was completed, 1,540 residents lived in the hall, which was originally intended for 1,094 people. Even so, despite this discomfort, the hall offered modern, affordable accommodation with a range of social, cultural and sports facilities. For example, the complex boasted a library, a photographic darkroom, a studio for artists, a gym and a sports field.
In the years 2011–2015, the hall of residence underwent a complete renovation. It was clad in insulation and the façade was painted a new colour. It also received new windows and balcony railings. Even before this, the empty ground floor of the hall was built up and adapted for new functions, as was the refectory, which is now an archive of Brno University of Technology. The other parts of the complex are still used as a student residence.
HK