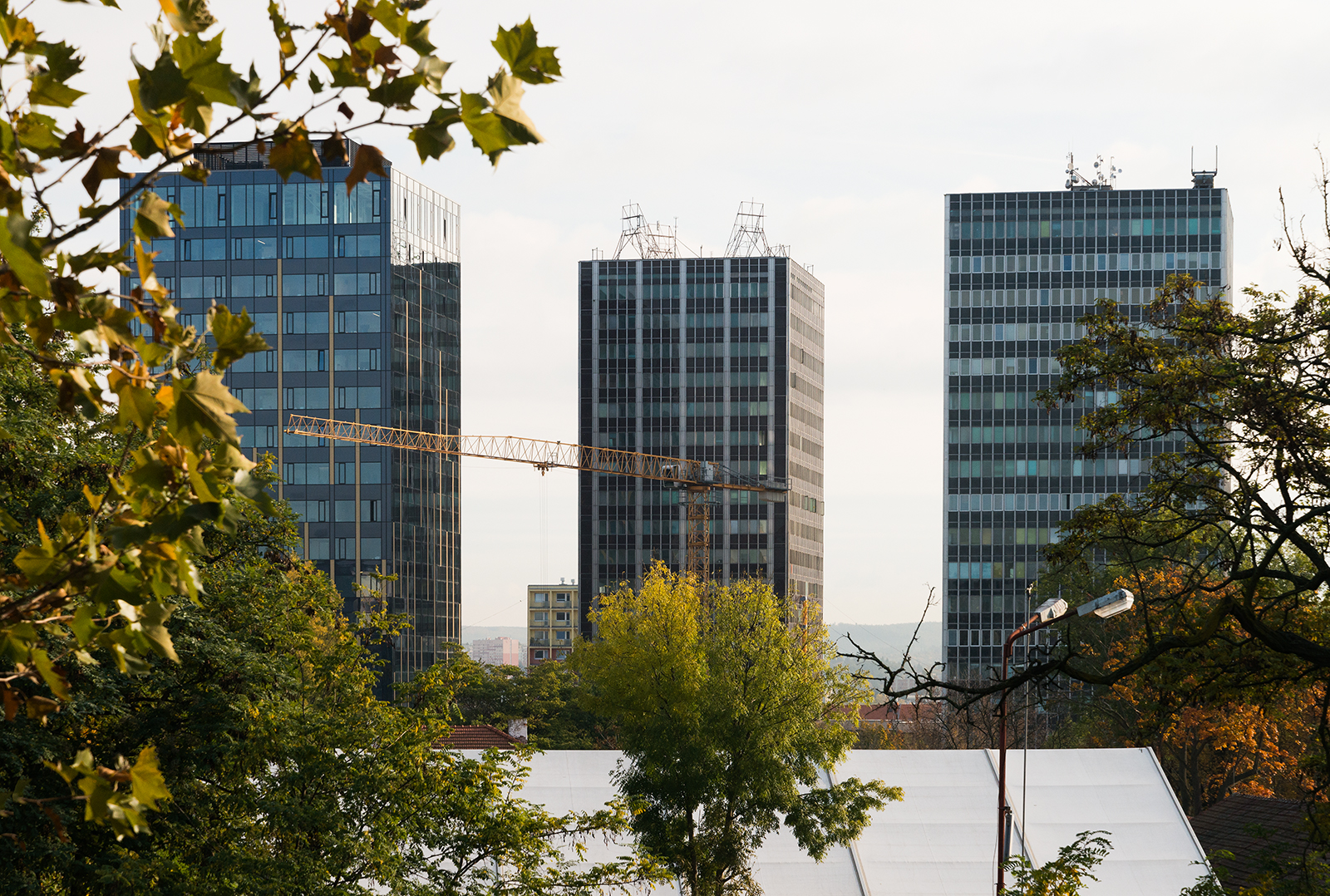 More photos (3)
On the basis of an urban planning project by Jiří Gřegorčík and František Antl from Stavoprojekt Brno, in the mid-1960s it was decided that part of the vacant site on what was known as ‘academic square’ would be used for offices. The design for this office district created a new square named náměstí Joliot Curie. The three 69-metre high-rise towers, with a floor plan of 22 x 24 metres, were built on a common substructure and shared an entrance hall. They would become an integral part of the Brno skyline. The complex was undeniably inspired by Western designs, especially building C, which, in its construction and appearance, was influenced by Ludwig Mies van der Rohe’s Seagram Building in New York (1958). The authors were František Kozák, Vladimír Balšán, Jaroslava Gloserová, Jan Zikmund, Josef Kylián and Jan Zikmund. The design was a steel structural frame and a suspended façade consisting of what were known as ‘Boletický panels’. This design was originally intended for the thirteen-storey headquarters of the Hutní projekt company in Plzeň (‘the Bohemie building’, 1969). In 1972, it was adapted for the Chepos company headquarters in Brno by Roman Zajíc and Jaroslav Ryška with the addition of three floors.
The other two tower buildings A and B were designed by the Stavoprojekt Brno office. For these buildings, in contrast to the structure of building C, Roman Zajíc and Jaroslav Ryška chose a reinforced concrete frame for the nineteen above-ground and two subterranean floors. The facade once again consisted of prefabricated Boletický panels. These offered a cheap and lightweight solution for the outer shell of the building and their supporting frames gave the buildings their characteristic appearance and subtle vertical division with distinct horizontal parapets. At first glance, the buildings were very similar, but there were differences in the colour of the outer shell and its configuration. The internal arrangement of the buildings was almost identical, with a core of lifts and staircases encircled by offices around the perimeter of each floor. Building A was for the headquarters of the Zbrojovka company and was completed in 1975. Building B, for the State Bank of Czechoslovakia, was finished four years later, together with the two-storey ground-floor connecting building with central entrance hall, phone booths and underground garages. The complex was decorated with many art works. For example, there was a glass sculpture by Valér Kováč on the ground floor of building B and the directors’ offices were adorned with paintings by Bohuslav Matal and Bohdan Lacina.
In 2015, the current owner of the towers began a fundamental and crude reconstruction, whereby the outer shell of the buildings was completely replaced with all-glass cladding with coloured vertical stripes. Building B was extended by three floors and building A by five floors. The complex was supplemented by new underground parking and a commercial ground floor. This radical change led to the loss of the original character of the buildings and a new mediocre aesthetic effect.