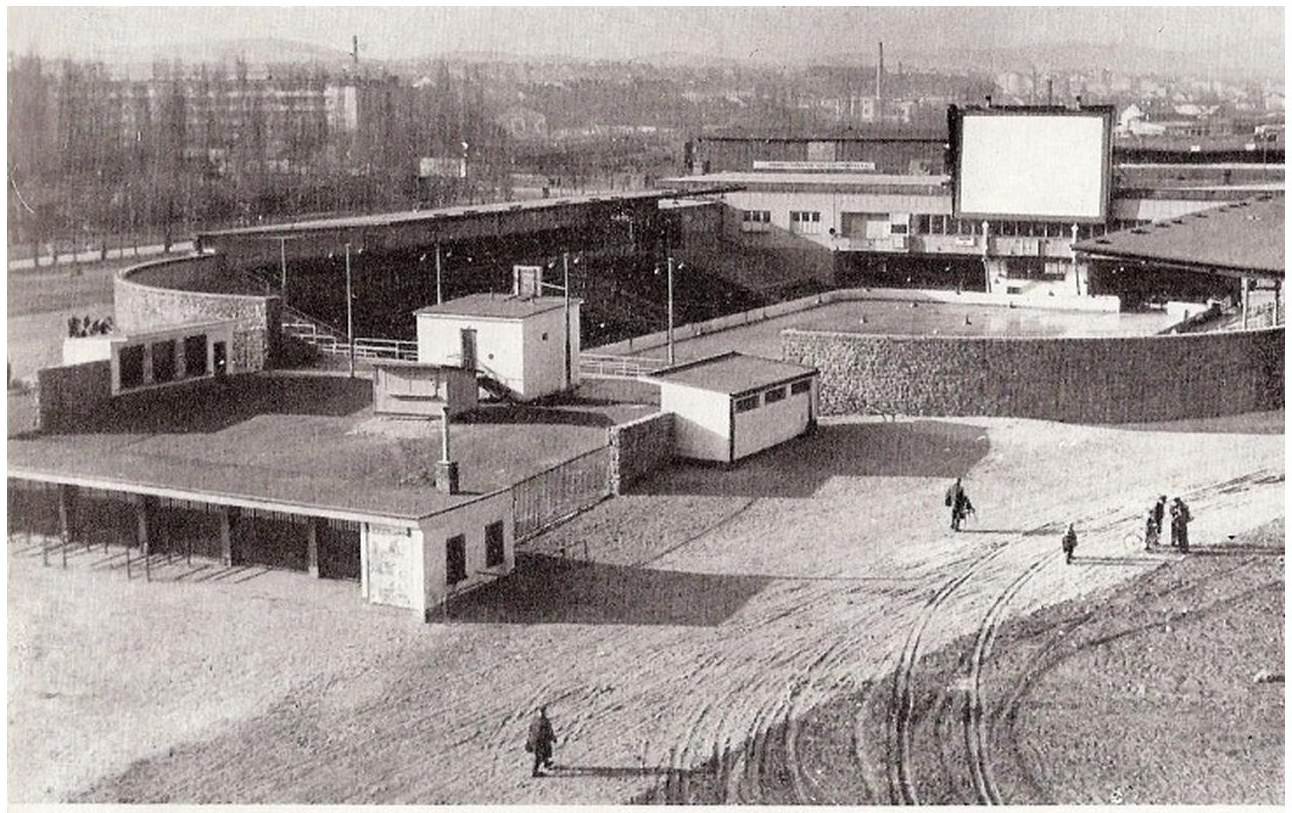 More photos (1)
The outdoor ice rink of the Za Lužánkami Winter Stadium was built in the first phase of the ambitious project of the Brno National Stadium cooperative. The design was drawn up by the architect Bohumil Fiala, who waived his fee for the work, and construction work was due to begin in 1946. However, there was some rather opaque criticism of the project from professional and particularly political quarters. Consequently, the cooperative committee commissioned a new project and assigned it to one of the leading critics of the former project, the architect Václav Roštlapil. In January 1947, thanks to labour brigades of students, soldiers and athletes, the winter stadium was ceremoniously opened under the name Beneš National Stadium.
At that time, it was the largest artificially cooled ice surface in Czechoslovakia. The main rink measuring ​​30 x 60 metres was situated next to a smaller training rink, which was primarily used by the general public for recreational skating. The architects composed the two ice surfaces in the shape of a letter T. The spatial concept of this design was based on the separation of the rinks by means of a one-storey ‘bridge’ building with a mostly glazed restaurant, a clubhouse, offices and other facilities. From this position, both ice rinks could be viewed by visitors to the restaurant and social areas, and also by sports commentators. The stands for 12,000 spectators were embedded in the terrain with access through the main gate from the direction of today’s Drobného street. As the winter stadium was one of the first to be built in Czechoslovakia (after Prague, Bratislava and České Budějovice), it was relatively difficult to construct, in terms of the materials available at that time, and it proved necessary to scale down the original programme. The plan for the comprehensive roofing of the stands was abandoned due to the high potential cost.
As a complex of more than just regional significance, it provided facilities for a number of teams, including the newly established sports club Red Star Brno. However, in 1959, when Czechoslovakia hosted the Ice Hockey World Championships, the shortcomings of having an uncovered winter stadium became apparent in an international context. It proved difficult to maintain the ice during snowfalls and also in higher temperatures, the ice surface was very often contaminated with ash from nearby industrial plants, and, in bad weather, the spectators in the stands were particularly uncomfortable.
Consequently, in 1959, the cooperative approved a design for a stadium roof by Bohumil Fiala, which used a patented ‘garland’ truss, developed by Vítkovice Steelworks. However, in the end, due to cost considerations, the Vítkovice patent was re-evaluated and in the summer of 1961 a new design was submitted by the Department of Steel Structures and Bridges of Brno University of Technology, led by the engineer Ferdinand Lederer. The design was conceived as a purely rational, economically viable and quick solution. The double-layer braced plate with a slope on one side utilized the columns of the original roofs of the side stands, whose foundations were adequate for the needs of the new roof. On the shorter sides, the weight of the roof was distributed across the lattice truss to the foundations of the existing restaurant building and the newly built southern stand. In order to avoid building new foundations and thus interfering with the unstable substratum, the stands were only reconstructed and extended in one place, which, however, gave spectators the worst view of the rink. This modification only increased the capacity of the stadium by 300 seats. However, this simple roof structure, in which the steel pipes were connected by hollow ball nodes, was an aesthetically very attractive and, at the same time, economical design. It also had the advantage that it could be assembled quickly. The project was approved in August 1961 and construction work began in 1962. On 6 September 1964, a league match got the first season under the roof underway.
The eventual appearance of the winter stadium was thus, on the one hand, a curious amalgam of the designs of three prominent architect/engineers, with visible layers of the individual construction phases of the building. At the same time, however, it can be perceived as a remnant of Bohumil Fiala’s architectural concept from 1960 with many of the original features of the layout and massing division of the building, such as the monumental bevelled inverse corners of the stadium and the projecting cube-like ground floor buildings with social facilities. The ‘Brussels-style’ curves of his side stands and main entrance with ticket offices pleasantly contrasted with the new roof structure overlapping on all sides with the linear geometry of its dense tubular network. Nevertheless, in the end, it was Lederer’s roof that became the outstanding feature of Brno’s winter stadium.
After the 1989 revolution, the fate of the whole Za Lužánkami Sports Complex befell the winter stadium, with fatal consequences. After it was privatized under the policy of the new political regime, it deteriorated significantly, and its condition failed to improve even after it was bought back from the new owner by the city. Despite the various plans and specific projects for reconstruction and new construction, the building continued to deteriorate. The fatal intervention was the decision to demolish it in 2008. Thus vanished the winter stadium, the ‘foundation stone’ of the Za Lužánkami Sports Complex.
ŠS