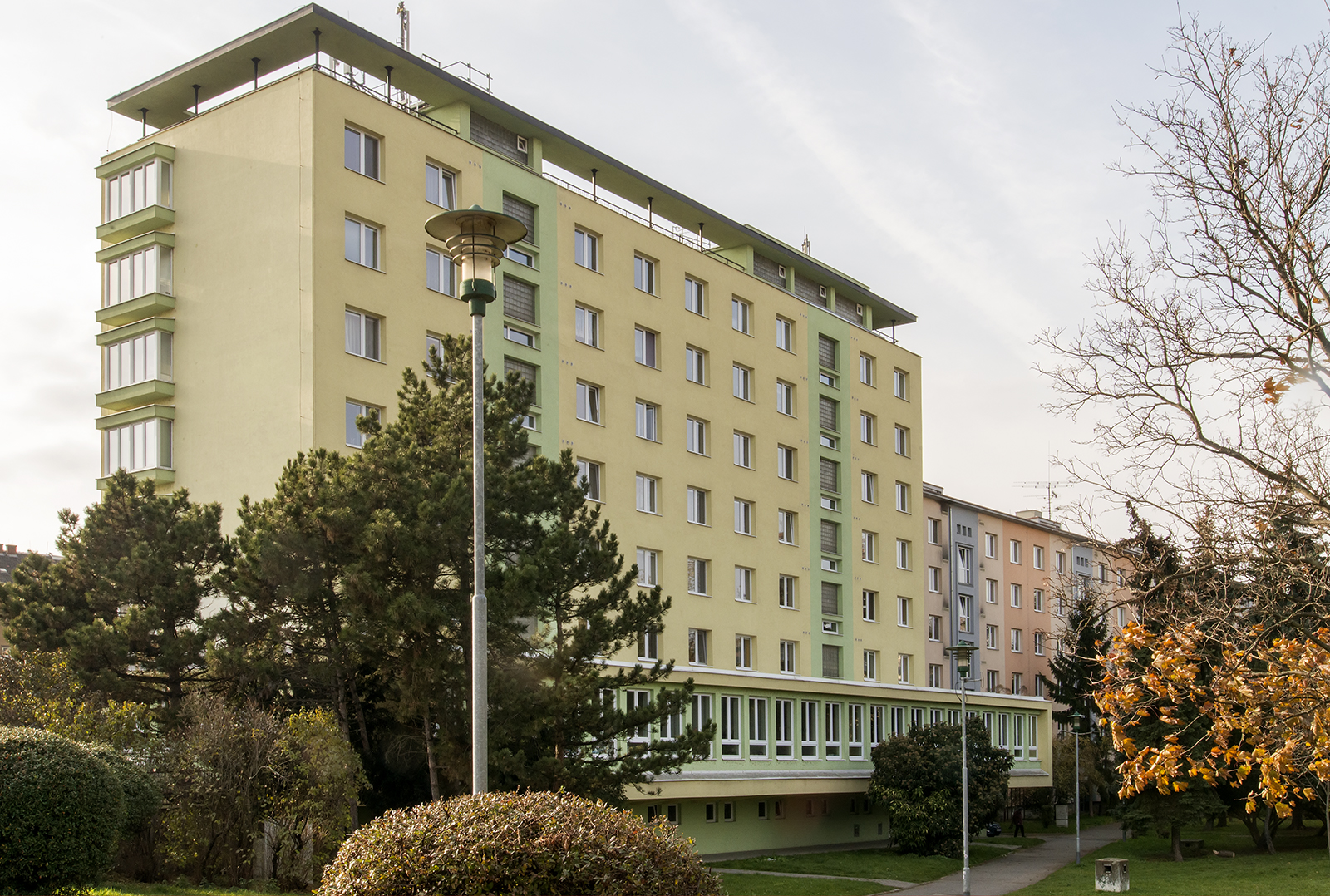 More photos (2)
The construction of the Na Nábřeží Housing Estate took place within the framework of the post-war phases of construction set out in the 1957 overall development plan of Brno, devised by a team led by František Kočí. One of the key criteria for the planned housing development was cost, i.e., cost per housing unit. In the first phase, apartment buildings were constructed along the river in Staré Brno, around Úvoz street, on Olomoucká, in Juliánov and in Černá Pole, and on the housing estate in Židenice. The Úvoz housing development by Miloš Kramoliš and the estate that during construction spontaneously acquired the name Na Nábřeží constitute a kind of transitional phase, as they both relatively sensitively harmonize with the older buildings around them and the terrain, or provide the missing element in unfinished or interrupted blocks of buildings. This first phase of construction built up great expectations and attracted the attention of the media, as these housing developments were seen as the most plentiful source of new apartments, which were still in short supply in Brno at that time.


Media interest in Na Nábřeží Housing Estate, comprised of buildings on both banks of the river Svratka, was associated with the experimental apartment buildings on Křídlovická street. The architects ensured that civic amenities were not only part of the project design, but that they were built in conjunction with the apartment buildings. Thus, the new residents had at their disposal a school, a nursery school, a crèche, a health centre and shops on the ground floor of the block on the corner of the streets Křídlovická and Nové sady. Another civic facility was the park along the right bank of the river Svratka that was designed together with the residential buildings. The architects clearly considered the massing composition of the estate and the heights of the buildings. There was an eleven-storey building designed by František Zounek on Křídlovická and a six-storey building on a two-storey substructure for a health centre on Bakalova nábřeží. The construction system T03B in its brick block variant facilitated the design of the corner buildings, as is the case with the building at the intersection of the streets Poříčí and Náplavka. Porticos were significant details of some of the buildings.


The nursery school on today’s Nádvorní street is also worthy of note. It was built to a 1957 design by Miroslav Dufek (construction 1959–1960), which contemporary critics praised for the organic connection of the functional spaces and the colour concept. In 1963, Dufek also designed a crèche next to the experimental buildings, in which he used a ramp with a gentle incline instead of stairs to the first floor. In the same year as the nursery school, a school was built on Bakalovo nábřeží to a design by Jaroslav Ledvina. This was an outstanding example of the ‘Brno school series’, which had a mono-block typology.


These buildings have not undergone any radical change, only minor modifications. Most buildings have exchanged their wooden windows for plastic versions and some have been clad with thermal insulation (e.g., the school, the nursery school, and the experimental buildings). Thus, the housing estate has retained its original character and the atmosphere of the trade fair reconstruction of Brno.