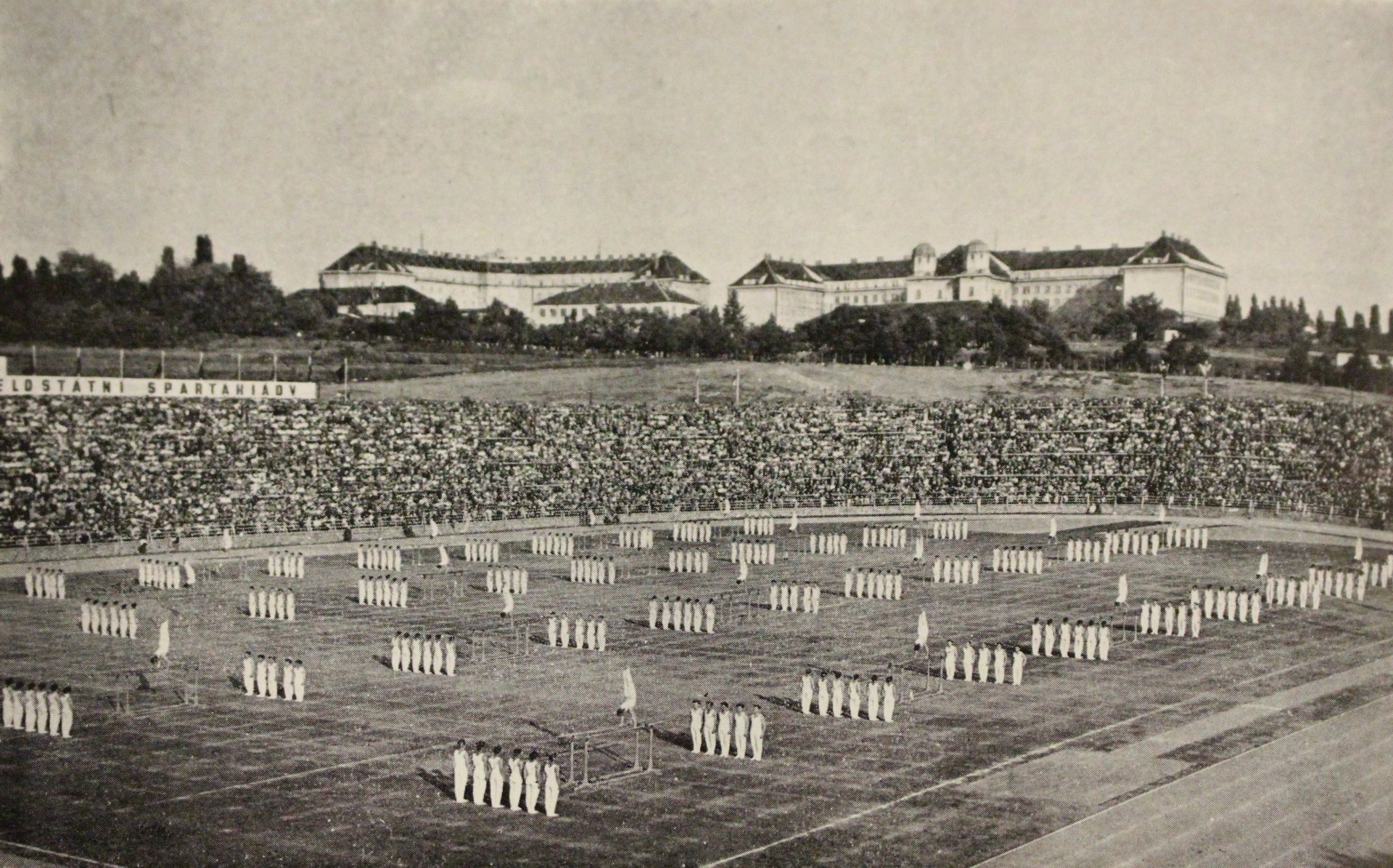 More photos (2)
Shortly after the winter stadium was built, the next phase of the construction of the Za Lužánkami Sports Complex continued with one of the development priorities of the post-February 1948 regime of Brno City Municipality. The first task was the grading, as the mounds of rubble dumped there from houses destroyed in the Second World War were up to seventeen metres in some places. After that, the area was drained and work on the athletics track and the playing area of ​​the stadium began. All this required a considerable amount of manpower. As with the construction of the winter stadium, most of the work was done by labour brigades. Therefore, athletes and officials of the sporting associations worked on the stadium in the framework of ‘T Initiatives’. However, in the second half of 1952, there was a massive collapse of the slope between the construction site and the University of Agriculture in the area of the planned training field. The landslide also disrupted the water supply system, which flooded the entire construction site. Although the damage was quickly rectified, the accident once more sparked debate about the suitability of the land behind Lužánky Park as the site for a sports complex. Consequently, architect Bohumil Fiala modified the design, whereby he re-situated the training field and had a retaining wall built on the slope. During the ongoing grading work, it was decided that, due to the unstable substratum, the main stadium would not be built from concrete for the time being. There was to be a provisional structural clay auditorium with wooden steps. The stadium would only be built in its final form after the embankments were in place and when it was certain that the subsoil would support a concrete structure and the weight of spectators.
In this first construction phase, the football and athletics stadium was completed in the autumn of 1953 and opened with a match between the teams DSO Baník and Dynamo Moscow. It was attended by 40,000 spectators, which was the largest attendance for a sports event in Brno, according to the period press. At the end of the 1950s, the stadium was enlarged with a three-storey west stand, again designed by Bohumil Fiala. After it was completed in 1960, the stadium capacity increased to 70,000 spectators, making it the largest stadium in Czechoslovakia at that time.
Apart from the installation of stadium lighting in 1970, a key period in the development of the football stadium was just after the Velvet Revolution. As part of the construction of the BOBY Centre sports and commercial complex, the south stand was reconstructed and extended. In 2001, Brno City Municipality bought the stadium from its private owner, who was no longer able to properly manage it. After that, it gradually turned into a wild patch of scrubland. The football stadium was aroused from its natural slumber for a brief time in 2015 by an initiative of fans, who managed to revive it for a magnificent farewell exhibition match for one of Zbrojovka Brno Football Club’s former players, which attracted a crowd of 35,000. Although this unique event stirred public debate as to the future of the stadium, its eventual fate remains uncertain.
ŠS