A Monument to Architect Adolf Loos 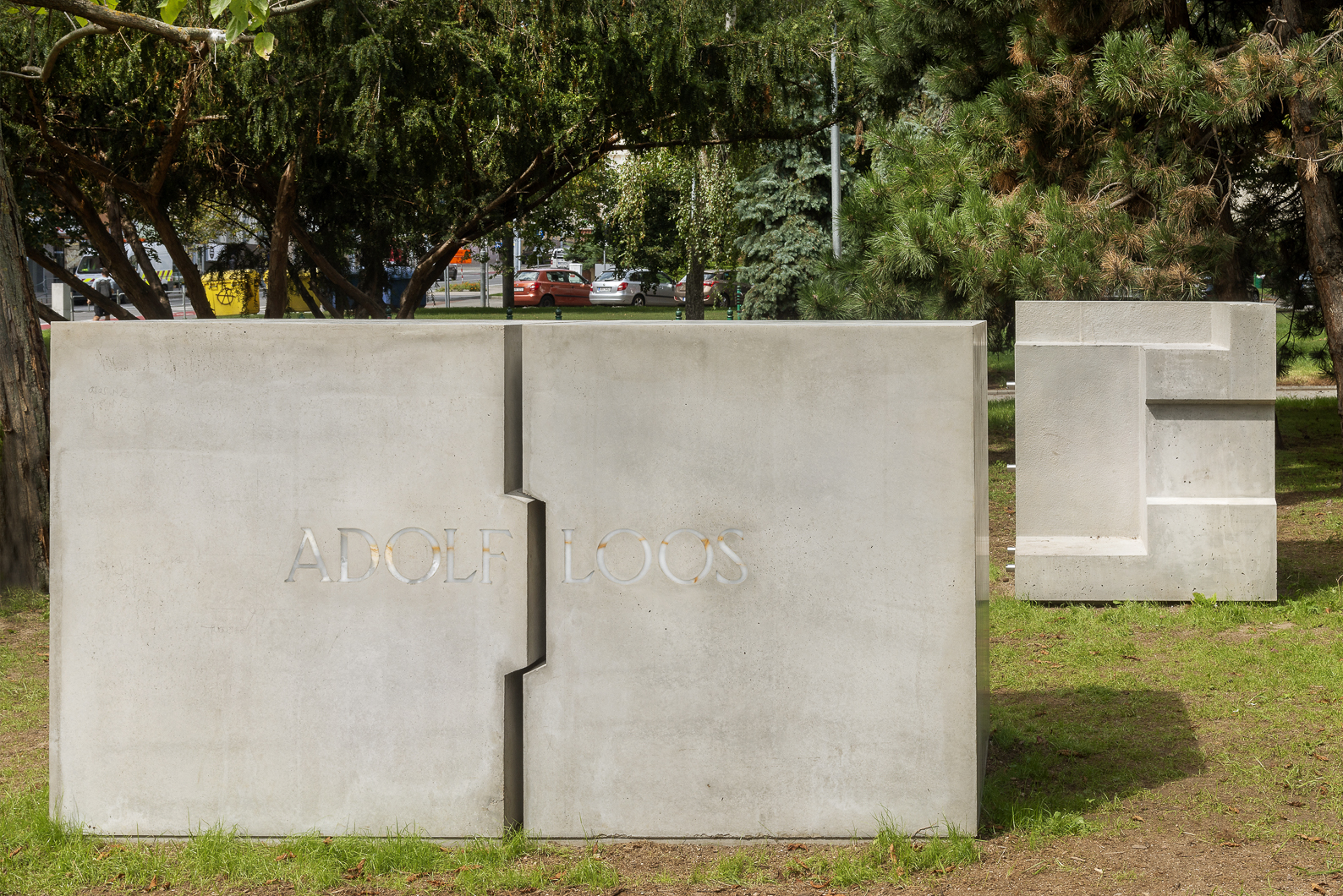 “Everyone must like a house. Unlike a work of art that no one needs to like. […] So should a house have nothing to do with art and architecture should not be included among the arts? That is right. Only a very small part of architecture belongs to art: a tombstone and a monument. Everything else, everything that serves a purpose, must be excluded from the realm of art.”
Adolf Loos, Über Architektur, Der Sturm I, 1910, No. 42, p. 334.

“Loos’ health is deteriorating. One day he asks me for a sheet of paper and a pencil. With considerable effort and a trembling hand, he draws a block on the paper and writes underneath ‘he was born in Brno, he died in Vienna‘. ‘Look, Lerle, this is my tombstone!’ […] He takes another blank paper and draws a new block on it. He puts the paper in my hand and briefly dictates to me: ‘A tombstone in gray granite, size…’ He thinks for a while. ‘Size not specified, it depends on the money available…’”
Claire-Beck Loos, Adolf Loos. Privátní portrét [Adolf Loos. A Private Portrait], Hodkovičky 2013, p. 78–79.

„Although Adolf Loos is undoubtedly the most famous Brno native in the eyes of architecture lovers, it was not until 2017 that the City of Brno decided to commemorate him with a monument. Prior to that, a street in the newly-built Lesná housing estate had been named after Loos in 1965, and the only monument in this country dedicated to Loos had been in Voroněžská Street in Liberec in front of the former Stavoprojekt building. The concrete monument, initiated by members of the SIAL architecture studio, was made in 1981 by the sculptor Jiří Seifert. It commemorated Loos’ stay in the city from 1885 to 1888, when he studied at the Royal State Industrial School. For the Brno monument, a grassy area by Kounicova Street was chosen as a suitable location. The architect’s parental house had stood nearby; in 1961–1964, the international Hotel Continental designed by Zdeněk Řihák was built on its site. It bears a memorial plaque by Jiří Marek commemorating Loos’ birthplace; the plaque was initiated by Řihák together with Bohuslav Fuchs and the art historian Zdeněk Kudělka.“
The competition to design the monument was announced by the Brno Department of Culture in December 2017 and in August of the following year, the design of Oldřich Morys and Jaroslav Sedlák was selected by the jury from a total of 63 submitted projects. “The jury agreed that this is a very strong design mentally connecting Brno and Vienna as the places of the architect’s birth and death. It is a conceptual work of characteristic form, which at the same time subtly alludes to Loos’ unique space design, the so-called Raumplan,” explained the Deputy Mayor for Culture. “The submitted monument is conceived as a concrete sculptural form of Adolf Loos’ tombstone, located in the Vienna Central Cemetery. The main idea of the competition design is to create a negative form (imprint) of Loos’ final resting place for the place where he was born and grew up. The mould together with the tombstone would form a compact monolithic block. However, this constellation will never happen, as the tombstone is in Vienna and the mould is in Brno. This nevertheless leads to an imaginary connection between the two places.” This is how the artists of the winning design explained their idea in the accompanying statement. The monument will be completed in 2020.
The minimalist tombstone in the shape of a simple granite block with the inscription “ADOLF LOOS” from which the final shape of the Brno monument is derived was designed by the architect himself. The sketches probably originated in 1931, when his health began to deteriorate. Adolf Loos died on 23 August 1933, aged 62, in the sanatorium of Dr. Schwarzmann in the village of Kalksburg on the outskirts of Vienna. However, the tombstone was made and placed in the Vienna Central Cemetery only in 1935, in connection with the transfer of Loos’ remains, which took place in October of the previous year.