The Provincial Chamber (or Provincial House, Landhaus; today the Constitutional Court of the Czech Republic) 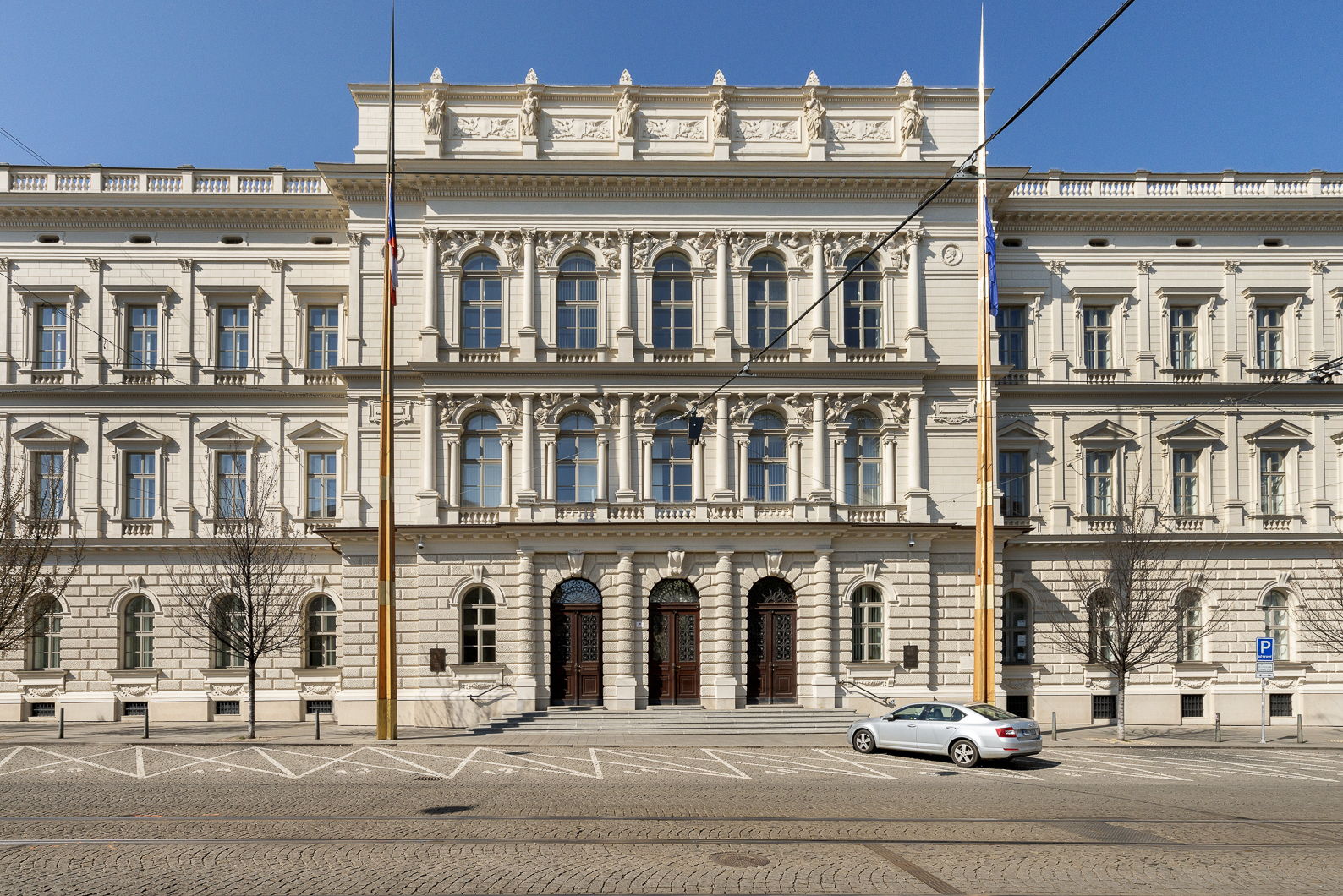 The arrival of Johann Eduard Tomola (1845–1907), who joined Loos’ workshop as a draftsman and intern in 1866, was an important milestone in the development of the latter’s sculptural trade. Tomola was a gifted sculptor and capable figuralist; in the latter half of the 1870s he was probably responsible for the more artistically demanding commissions of Loos’ firm. In 1877, he became Loos’ partner and the works from the period 1877–1880 are signed Loos & Tomola or Loos–Tomola (Brünn).
From 1875‒1878, Adolf Loos Sr. and Johann Eduard Tomola supplied sculptural and stonemasonry work for the new Provincial House on the Brno Ring Boulevard, the most important new public building in Brno at the time, realized by Josef Arnold.
Loos made thorough preparations for this large-scale commission, using all of his previous experience. He made a model of the building that he exhibited in his studio, clearly demonstrating on it the changes in the decoration of the façades as compared to the architects’ original design. “It is also worth noting that in his studio, Mr. Loos had a model be made on his own initiative and at his own expense; his successful work and overall execution can in all dignity rank it among the products of well-known and first-class Viennese companies working in this genre.” (Tagesbote, 27 June 1875, No. 145, p. 5)
The good technical quality of the figurative and ornamental motifs of the rich decoration of the stately Neo-Renaissance building’s four façades can be assessed at a glance. Figurative allegories, filling the spandrels at the windows on the first and second floors, are complemented with portrait medallions in the same formal design as the medallions on the German Grammar School and with a number of other ornamental features. A large Moravian coat-of-arms created by Loos Sr. is placed above the carriage entrance to the building from Česká Street.
The figurative decoration of the attics on both longitudinal façades consisted of six female allegorical figures symbolizing Peace, Justice, History, Prosperity, Craftsmanship and Love of the Fatherland. The originals of these monumental limestone figures for the attic of the southern main longitudinal façade heading to today's Joštova Street were made by Loos’ former teacher, the Viennese sculptor Josef Schönfeld. The Loos & Tomola Company then repeated the composition with slightly varied copies on the attic of the northern longitudinal façade heading to today’s Žerotínovo Square.
Loos & Tomola also made the decorative “Final Stone” [Schlußstein] for the Provincial House, still located in the lobby of the building and bearing a symbolic motif of oak and linden branches, representing the Germans and the Czechs and indicating cooperation and a strong union of both nations: "The Final Stone, coming from the studio of the renowned local sculptor Mr. Adolf Loos, is a magnificent piece of sculptural art that attracts both laymen and experts with its excellent execution. It was made according to the drawings of Viennese architects Hefft and Raschka from Breitenbrunner stone and can indeed be called a work of art. In accordance with the building style of the Provincial House, the Final Stone too is made in the style of the Italian Renaissance. The black marble slab is framed by columns supporting a gable with a laurel wreath, while the lower part is closed by volutes, from which protrude most faithfully rendered oak and linden branches, corresponding to the peoples of the province. All the sculptures on the new Provincial House are truly artistic and fully credit Mr. Loos.” (Tagesbote XXVIII, 26 January 1878, No. 22, p. 3)

Name
The Provincial Chamber (or Provincial House, Landhaus; today the Constitutional Court of the Czech Republic)