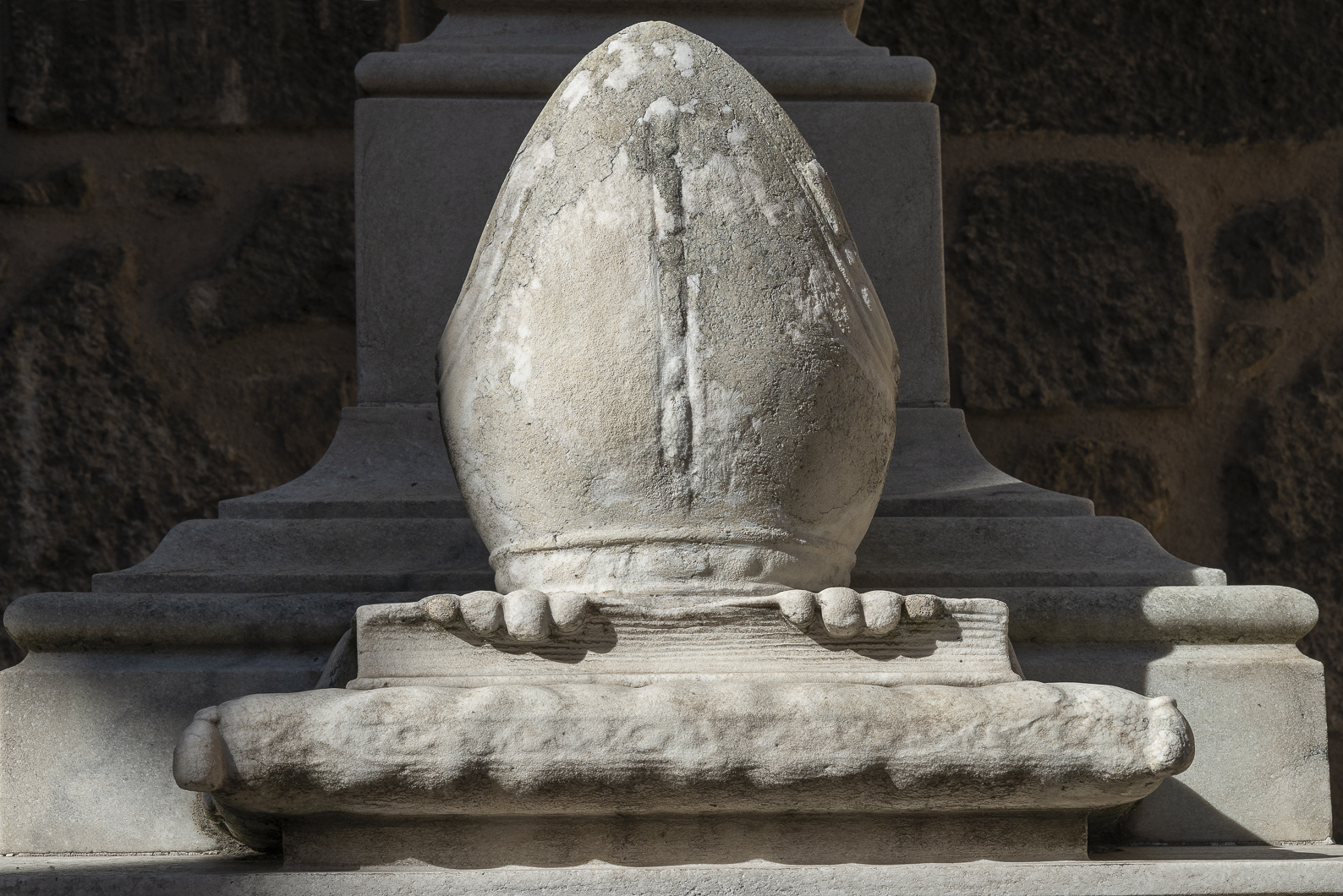 The tombstone was originally located in the Municipal Cemetery on Kounicova Street; after the cemetery’s abandonment, the tombstone was moved from there to its current location.

After the untimely death of Adolf Loos Sr. in 1879, the prosperous stonemasonry firm was inherited by his widow Marie Loos (1831–1921). It was agreed that Loos’ partner Johann Eduard Tomola would continue to run the company together with her. However, their cooperation did not last: Tomola soon became independent and founded his own competing firm. From 1 January 1880, Marie Loos ran the company on her own, and the “Sculpture and Stonemasonry Industry of Adolf Loos and Widow”, as it was called in contemporary advertising, prospered under her leadership. The headquarters remained in Loos’ former studio on today’s Kounicova Street in Brno, the company had several branches and continued to use the marble quarries in Nedvědice, which were partly its own property and partly leased from the municipality. The company also included metalwork and a foundry producing wrought iron grave grilles, candelabra and grave lamps from cast iron or wrought iron. However, works in architecture and the production of tombstones remained its main areas of activity.
It was specifically in the field of tombstone manufacture that Loos widow’s company was Brno’s “number one on the market”. Its prestige is evidenced among other things by the fact that it was chosen to supply the tombstone for the seventh bishop of Brno, Karel Nötig (1806–1882). After the abandonment of the Municipal Cemetery on Kounicova Street in 1910, four tombstones of Brno bishops from the 19th century were transferred to Petrov and installed around the outer walls of Ss. Peter and Paul Cathedral. Nöttig’s tombstone was installed, although not in its entirety, at the southern perimeter wall.
The tombstone made of Nedvědice marble has the form of a tall vertically oriented prismatic plinth topped by a protruding profiled cornice; a Latin cross with a decoratively shaped three-leafed ending of the beams grows from it. Signs of the episcopal rank are carved in the marble on the ledge of the plinth: a closed book is placed on a cushion, gloves, a priest’s stole and a mitre rest on it. The composition used to be complemented with a cross and a bishop’s staff made of gilded metal. Further decorative elements were originally parts of the tomb – a pair of side column candelabra with lanterns and a metal grid in neo-Gothic style, lining the grave site. The execution shows a good level of craftsmanship and fully complies with the conventional formal scheme of an episcopal tombstone according to the customs of the time.
The other three mentioned tombstones of Brno bishops are similar in form, such as the marble tombstone of Bishop Vincenc Josef Prince Schrattenbach (1744–1819) at the outer northern wall of the cathedral from 1857, made by Benedikt Edele (1797–1867), another Brno sculptor of the 19th century, bearing the same symbols as the tombstone of Bishop Nötig.