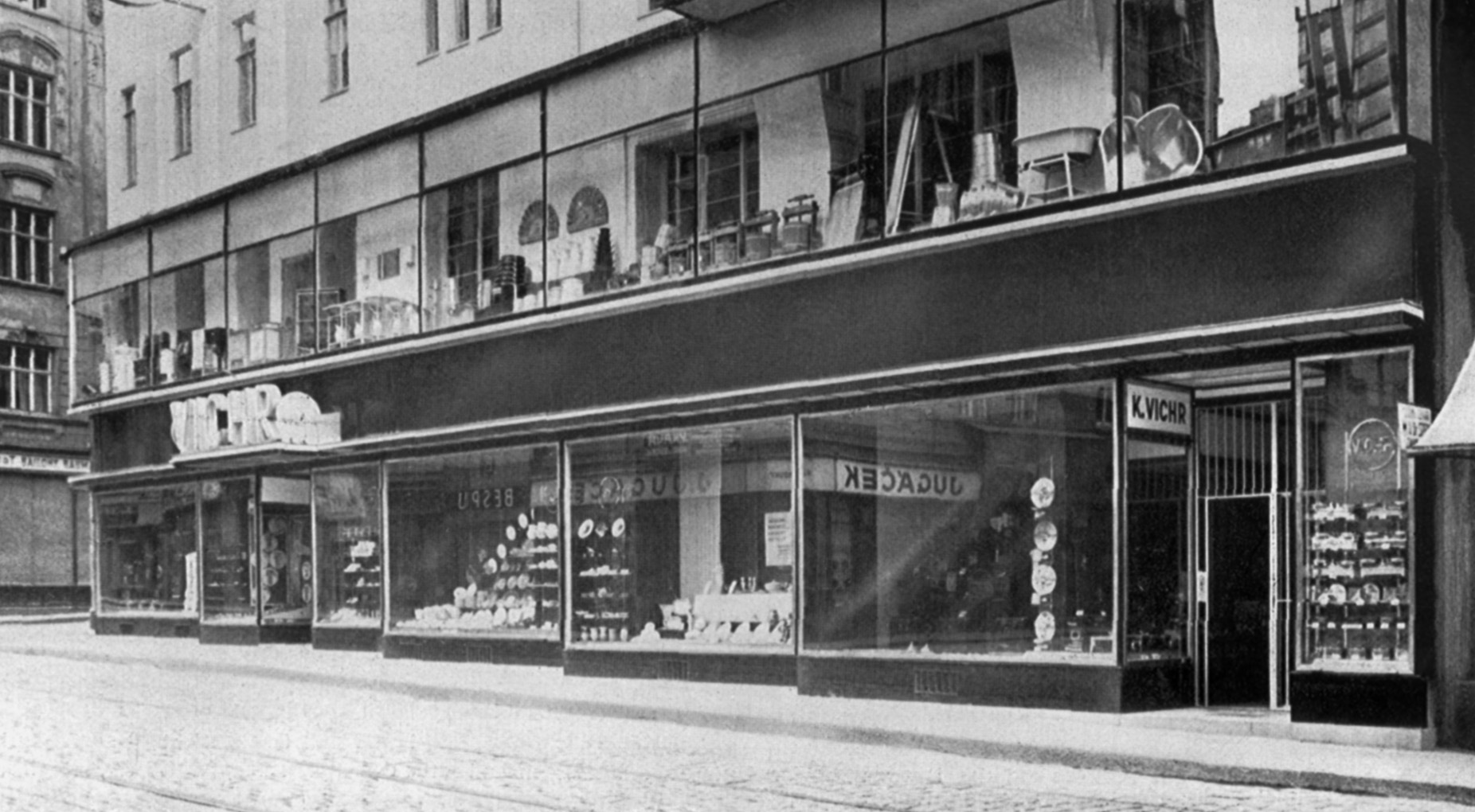 More photos (4)
The young Konrád Vichr opened his first ironmonger’s shop on Kobližná street in 1908. The business grew quickly and the founder soon became owner of the entire premises. In the 1930s, he extended his retail space to two floors. In seeking a modern design, he approached the architect Norbert Troller, who was famous for his designs for retail spaces. For the ground floor, Troller designed rounded shop windows in chrome frames bordered by a black socle. The Vichr company name shone out in neon above them on a wide band of opaque black glass. The glazed band also hid the original facade of the building’s first floor, which was also used for displaying goods.
However, during the liberation of Brno at the end of the Second World War, the whole building was destroyed by fire. In 1946, Konrád Vichr decided to build a new commercial and office building, and again commissioned the architect of Jewish descent Norbert Troller, who had returned from Auschwitz concentration camp only a few months earlier. The eight-storey building with a rounded corner has two lower floors of retail space and six upper floors with offices, the topmost of which is set back on a terrace behind the line of the street. The lower two floors of the retail space extend the length of the neighbouring building on Vachova street into the courtyard space. This corner building with its distinctive horizontally segmented façade continues in Brno’s pre-war functionalist tradition. The architect’s design for the first and second above-ground floors refers back to his pre-war design of the original premises. The rounded shop windows in chrome frames follow the contours of the store with its two entrances on Kobližná street and come to a halt at the supply entrance on Vachova street. The floor above the smoothly plastered band with the name of the company (reminiscent of the original opaque glass band) is formed by a strip of windows accentuated by a distinctive cornice. The five floors of the office space are formed by bands of masonry frames with simple set back windows. Following the pre-war nautical aesthetic, the architect wanted to create the impression of continuous windows on all floors.
Konrád Vichr only had a few months to enjoy his new modern premises, before the whole building was confiscated after the communist coup of 1948. In that year, Norbert Troller emigrated to the USA and the Vichr department store remained his only post-war design built in Czechoslovakia. During the communist period, the building housed a shop that sold household goods, which was still known as ‘Vichr’s’ among its customers. After the Velvet Revolution, when the building was returned to Konrád Vichr’s descendants in restitution, the traditional name and line of business of the Vichr department store was renewed. The building was reconstructed in the early 1990s and is still run as a family business today.
DM