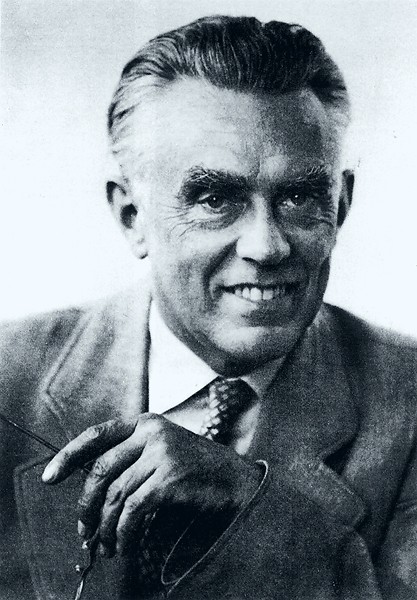 Vladimír Karfík, architect and teacher, was born in Idria, Slovenia, on 26 October 1901. In 1919-24 he studied at the Czech Technical University in Prague and the Academy of Fine Arts in Jan Kotěra's studio. In 1925 he was employed in Le Corbusier's studio in Paris; he then worked at Holabird & Root, a Chicago-based firm that designed skyscrapers. He also worked in Frank Lloyd Wright's studio. In 1930 he returned to Czechoslovakia and became the head of the design department at Baťa in Zlín, where he remained until 1946. He designed Baťa facilities all over Czechoslovakia and abroad. In Zlín he designed a number of buildings, from schools and sports centres, residential development, social centres, managers' villas and an evangelical chapel up to the spectacular high-rise Baťa administration tower. In 1946-71 he taught architecture at the Slovak University of Technology in Bratislava, cooperated with the Slovak Academy of Sciences and worked as a freelance designer. In 1971 he became a researcher at URBION (State Institute of Urbanism and Town Planning) in Bratislava. In 1978-82 he was the head of the department of architecture at the University of Malta. After his return to Czechoslovakia he settled in Barvičova Street in Brno, where he lived until his death. In 1985 he became a member of the American Institute of Architects and in 1992 Václav Havel conferred him the Gold Medal of the Czech and Slovak Federation. The architect died in Brno on 6 June 1996.