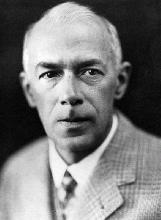 Emil Králík, architect, pedagogue and outstanding drawer, was born in Prague on 21 February 1880. He studied architecture at the Czech University of Technology, in Professor Josef Schulz's studio, in 1900-04; he went on to become Jan Koula's assistant at the Institute of Architectural and Ornamental Drawing. After graduation he worked for architects Antonín Balšánek and Osvald Polívka's. In 1907 he moved to Brno, where he was appointed as a professor at the Czech Polytechnic School. In this period Prostějov industrialists and brothers Josef and František Kovařík had their villas built in the style of Vienna modernism and their interiors were furnished by Vulkania Prostějov, an arts and crafts company, where Králík held the position of artistic director from 1913 to 1915. In 1920 he became an associate professor in the newly opened architecture department at the Czech University of Technology in Brno, where he taught architectural and ornamental drawing in 1922-24 and was appointed dean in 1933-34. In 1927 he worked as an implementation designer for the Brno Exhibition Centre at the "Bauer Ramp" Chateau and designed the functionalist building of the cinema with a café. In 1942 he was imprisoned by the Nazis in Svatobořice concentration camp, where he remained until the end of the war. He returned home seriously ill and died in Prague on 26 June 1946.