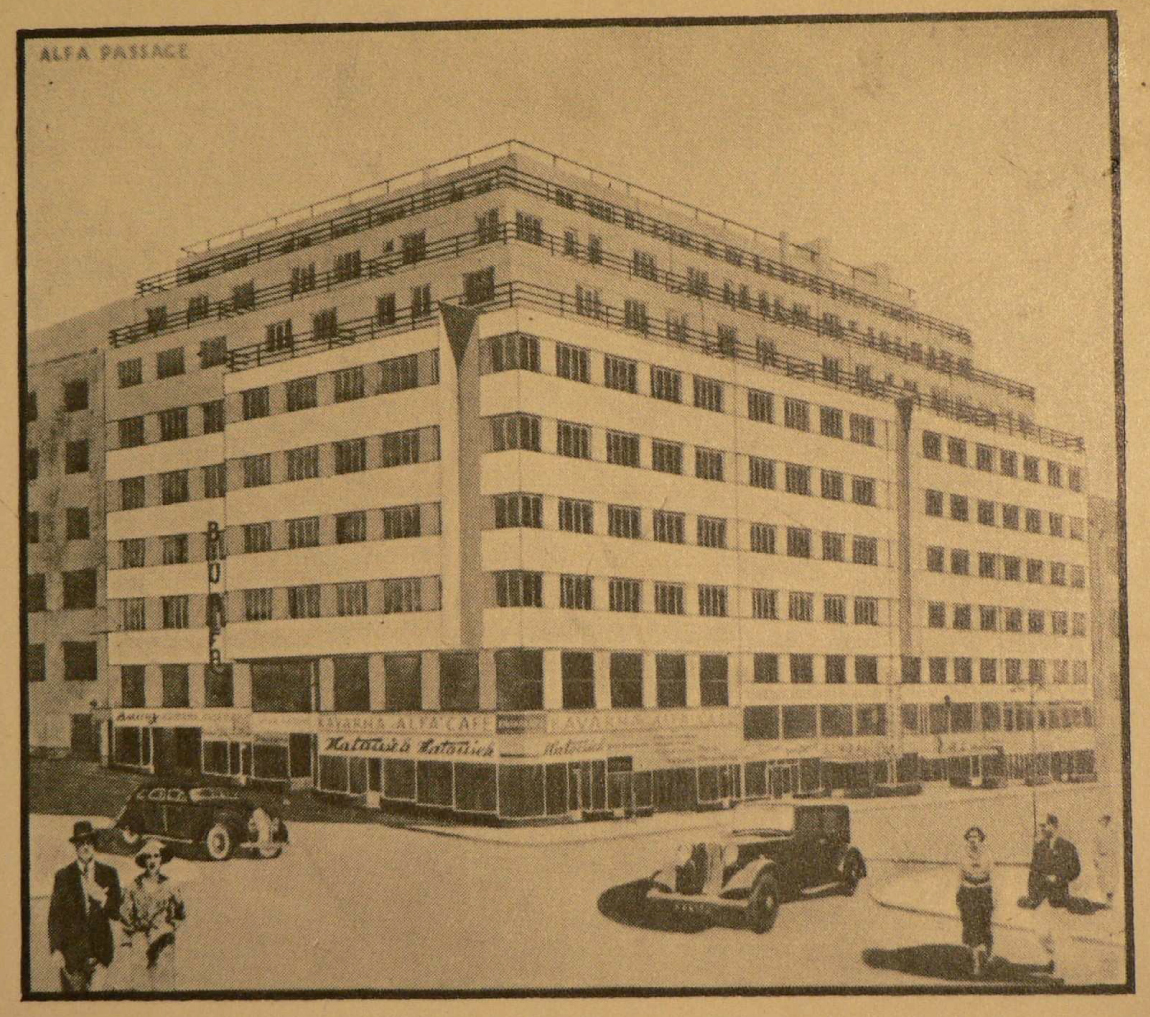 The multi-purpose complex of the Alfa Palace grew on the site formerly occupied by Baroque aristocratic houses owned by the Mitrovský family and Baron von Freyenfels in present-day Po tovská Street. The property was purchased in 1930 from the owners at the time by Brno builder Franti ek Hrdina, who had the decrepit buildings demolished. He approached architect Bohuslav Fuchs with a request to design a grand apartment block with a retail arcade and a cinema. His design involved a turret in the corner, opaxite cladding and pronounced horizontal segmentation of the structure by means of ribbon windows. However, Fuch's design was re-worked by Hrdina's Technical Office. The builder may have been enchanted by the idea of the first American-style skyscraper to appear in Brno and decided to raise the corner tower up to 14 floors. However, strict regulations and complicated stability issues resulted in the construction of a more moderate nine-level version. The construction of the palace progressed in several stages up to 1937. However, the first screening of the White Enchantment took place at the Alfa Cinema in the basement on 28 February 1932.
The eight-story Alfa Palace is situated on the corner of Jánská and Po tovská streets and its arcade is linked to the buildings facing náměstí Svobody (Liberty Square). The complex consists of a single-level commercial hall with a gallery sheltered by a glass roof; the gallery is, at the upper levels, connected to the residential wings with three yards. The commercial areas influence the facade of the ground and first floor with its large display windows; the topmost retracted floors feature terraces overlooking Po tovská and Jánská streets. The arcade contains eight entrances to approximately 180 apartments of many different sizes equipped with central heating and accessible by lifts. Originally, the basement housed the Alfa Cinema for 800 viewers and the Metro-Hall dancing bar. A spacious café which, according to Fuch's design, should have included a pool room, chess room and club room, was situated on the mezzanine level of the commercial arcade. The final interior treatment of the cinema and café were designed by architect Norbert Troller. Today the former Alfa Cinema, open until 2003, houses the HaDivadlo theatre, and the original café is used for commercial spaces. The operation of the Metro Music club was renewed in the basement accessible from Po tovská Street.