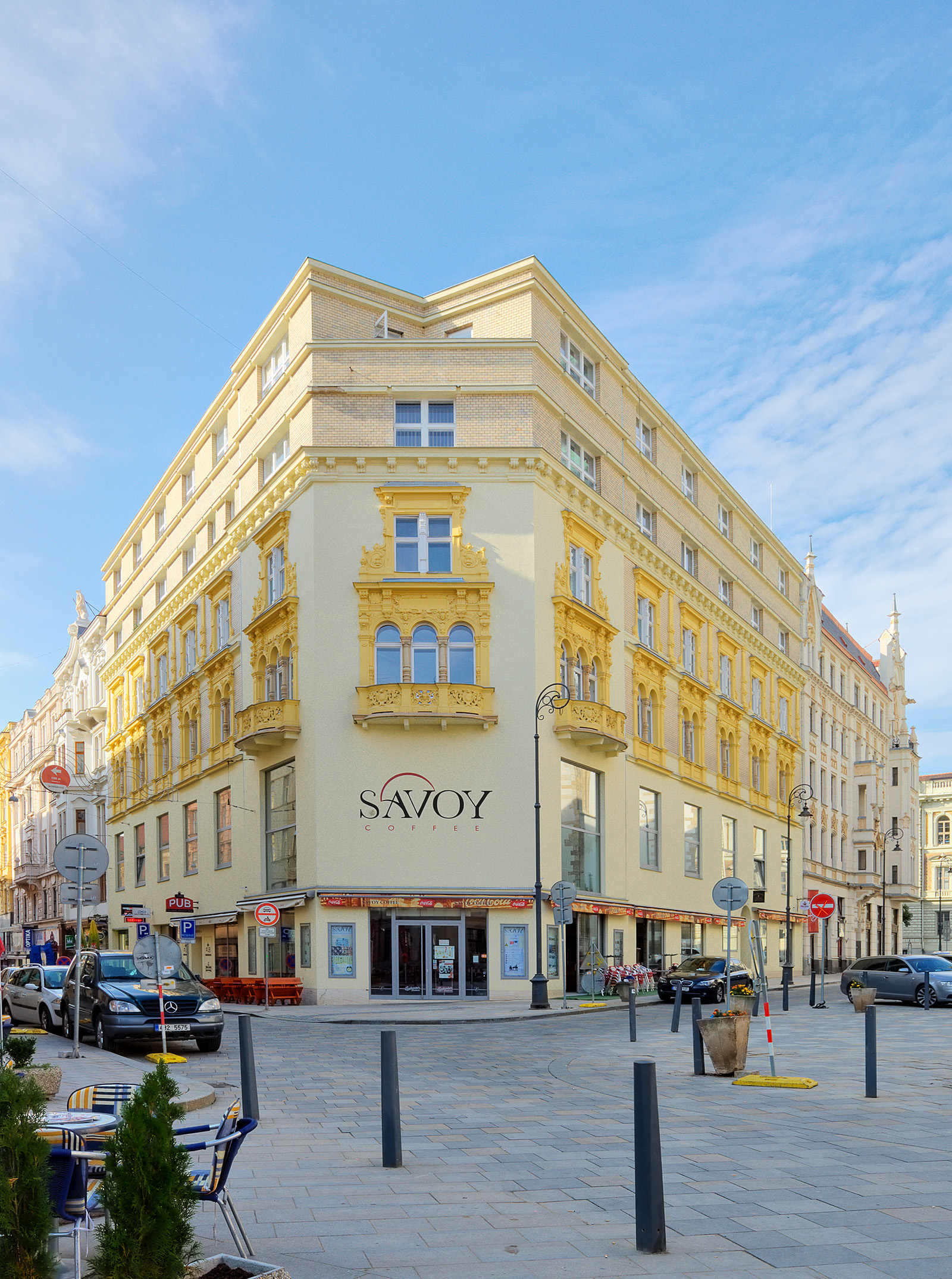 In the spring of 1927, the Regional Union of Restaurant and Café Owners in Moravia and Silesia organized a ten-day fact-finding tour of France. The owners of cafés and restaurants as well as several Brno architects visited the most modern French cafés in order to acquire knowledge of the latest style trends, technological innovations and construction possibilities. A number of these innovations can be found in the design of the Savoy Café by architect Jindřich Kumpošt for Jan Nekvapil, a café owner.
The café was established in 1929 in a corner building originally housing the Thonethof on Jakubské náměstí. The ground floor of the building had served as a German café for a long time; however, Nekvapil had been unsuccessful for years in his attempts to acquire the operating licence to the facility. He therefore decided to convert the historicist building into a hotel based on the design by Kumpo t by means of a  two-level extension. After obtaining the licence, Nekvapil asked Kumpo t to adapt the ground and first floor to create a grand café area.
The architect chose a demanding structural solution that enabled him to connect the two floors. The use of the steel and ferro-concrete structure made it possible to take down the internal partition walls, lower or even remove the ceilings of the ground floor and significantly increase the window openings. The central component of the interior is a  steel riveted pillar, which is the only revealed supporting element in the interior of the café. In order to free the space in the corner with a  view of the square, the architect moved the new café entrance to Běhounská Street. The entrance led to a unique cloakroom equipped with an elevator that took coats to the basement so that the air in the café was not tainted by their odours. Fresh air was brought to the cloakroom by a modern automated ventilation system. The system featured special chambers that cleaned, moistened and added ozone and a fresh fragrance of forest resins. Several electric thermometers located in the café enabled the heating to automatically respond to changes in temperature. Another technologically unique system was also installed in the Villa Tugendhat, designed by Mies van der Rohe in 1930.
The ground floor of the café was panelled with travertine panels and linked to the upstairs areas by an imperial staircase with onyx cladding. Guests could continue to the gallery featuring a gaming room, kitchen and restrooms with another cloakroom. The kitchen was linked to the café by a separate staircase so the waiters could serve guests quickly without being hindered by the bustle in the café. The walls of the first floor were covered with gray plush; the floor was covered with red plush carpet and the space was illuminated by neon lights, transparent alabaster and onyx. The furnishings of the ladies' toilets resembled beauty salons and the tables in the café featured hooks for hats and handbags. Music was performed by a live band on the balcony above the staircase or was played from the loudspeakers of the radio system. In the summertime, all the windows of the café could be pulled up and opened on the ground floor so that the interior merged with life on the street.
However, the interior was changed dramatically after World War II. The Výběr clothes store was set up in the interior in the 1950s and a large part of the original furnishings were destroyed. The window with the balcony on the first floor of the corner facade was bricked up and the entrance returned to the corner. Radical reconstruction in 2008 renewed the original function of the interior with the preserved onyx panelled staircase; however, the new interior does not match the former versatile architectural and technical qualities of the space.