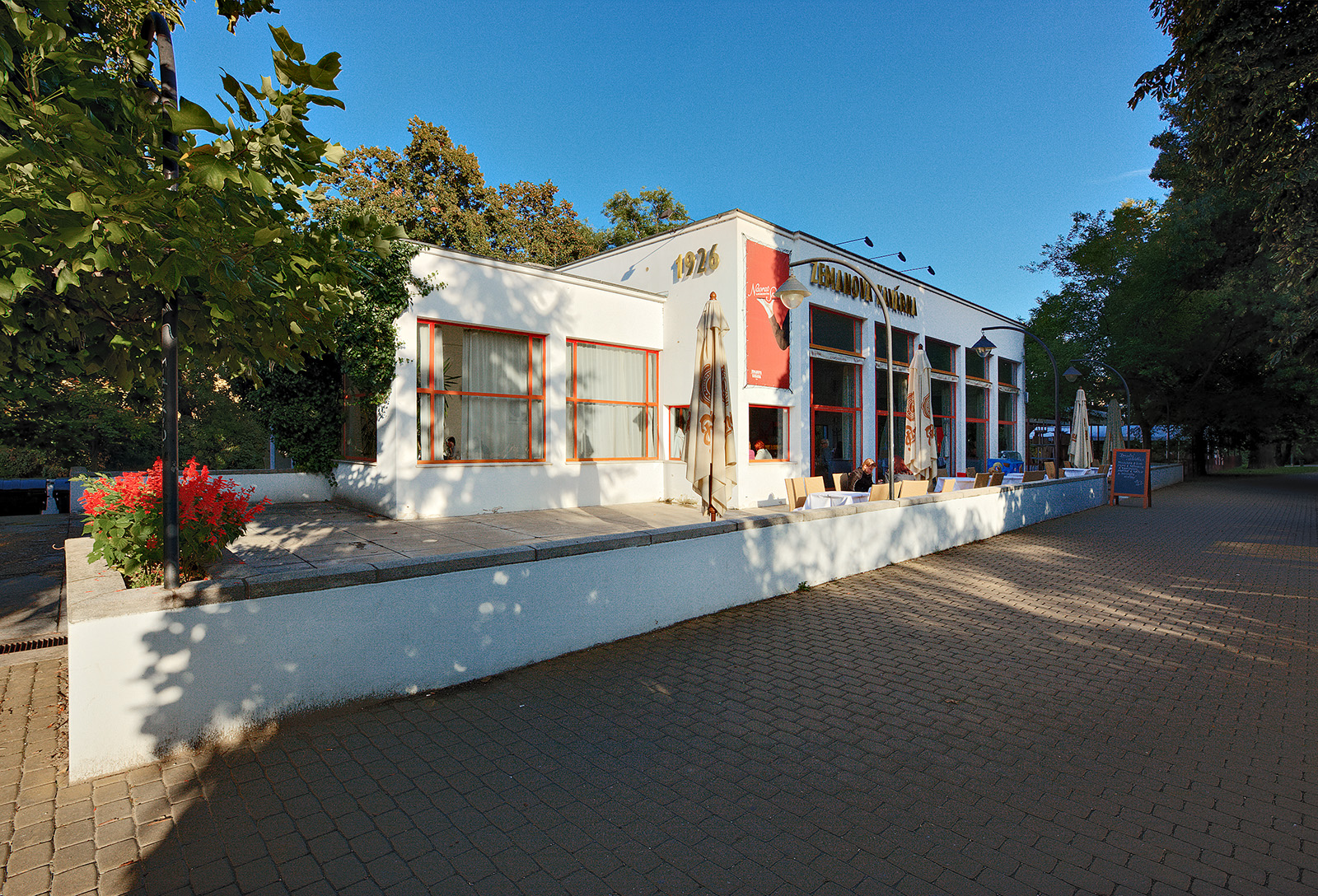 Koliště Park along Brno's ring road and near the present-day Janáček Theatre, was the site of a wooden pavilion known as the Schopp Café in the early 20th century. It was purchased by Josef Zeman, a café owner, who decided to build a new café made of brick. Therefore, he selected Bohuslav Fuchs, a young Brno architect, who designed the first rigidly functionalist building in Brno opened under the name of Pavillon in 1926.
The mass of the structure consists of the block of the main raised area of the café adjoined by cubic masses of the main entrance, parlor and the two-level service area. This radically functional design reduced to simple cubic shapes and glass walls had appeared in the works by Le Corbusier since the beginning of the 1920s. Brno's architects could encounter his works not only in professional journals, but also thanks to his lecture Purism and French architecture delivered in Brno in 1925. There he presented the already existing standardized Citrohan house with a glass wall in the raised hall. Bohuslav Fuchs also used large glass windows in steel frames, which were drawn in during the summer season enabling the interior to merge perfectly with the exterior. Five years earlier he had applied a system that would later become famous owing to the Villa Tugendhat. His design also featured interior accessories in copper and brass.
The café operated until 1948, when it was nationalized and converted into a nursery school. However, a  decision was made in the early 1960s requiring that the building be demolished due to the construction of the Janáček Theatre, despite the fact that the café did not interfere with the theatre site. Bohuslav Fuchs himself attempted to rescue the café by presenting an alternative design for the theatre; his efforts were unsuccessful, and the café was demolished in 1964. The happening entitled Second delimitation of the Zeman Café organized by young architects Zbyněk Pech and Jana Janíková on 16 November 1991 was the first post-revolution remembrance of this famous café. At this event, the participants delimited the original ground plan of the café with pegs and bands, suggested its original mass by inflated balloons and invited passers-by to sit down over a cup of coffee. This artistic provocation gradually matured into a real idea to build a replica of the café; an investor was found and the Ateliér ERA studio (architects Pech and Janíková) prepared an architectural project on a more suitable plot farther away from the Janáček Theatre. Unlike the original appearance of the café, the new building was extended with one underground level occupied by a club; a music stage with a gazebo, part of Fuchs' design from 1925 but never realized, was built near the building. Relying on preserved photographs and other buildings designed by Fuchs, the architects even reconstructed the interior and its furnishings. The nearly perfect replica of the Zeman Café was ceremonially opened on 24 March 1995, the 100th anniversary of Bohuslav Fuchs' birth, and has been in operation as a café and restaurant ever since.