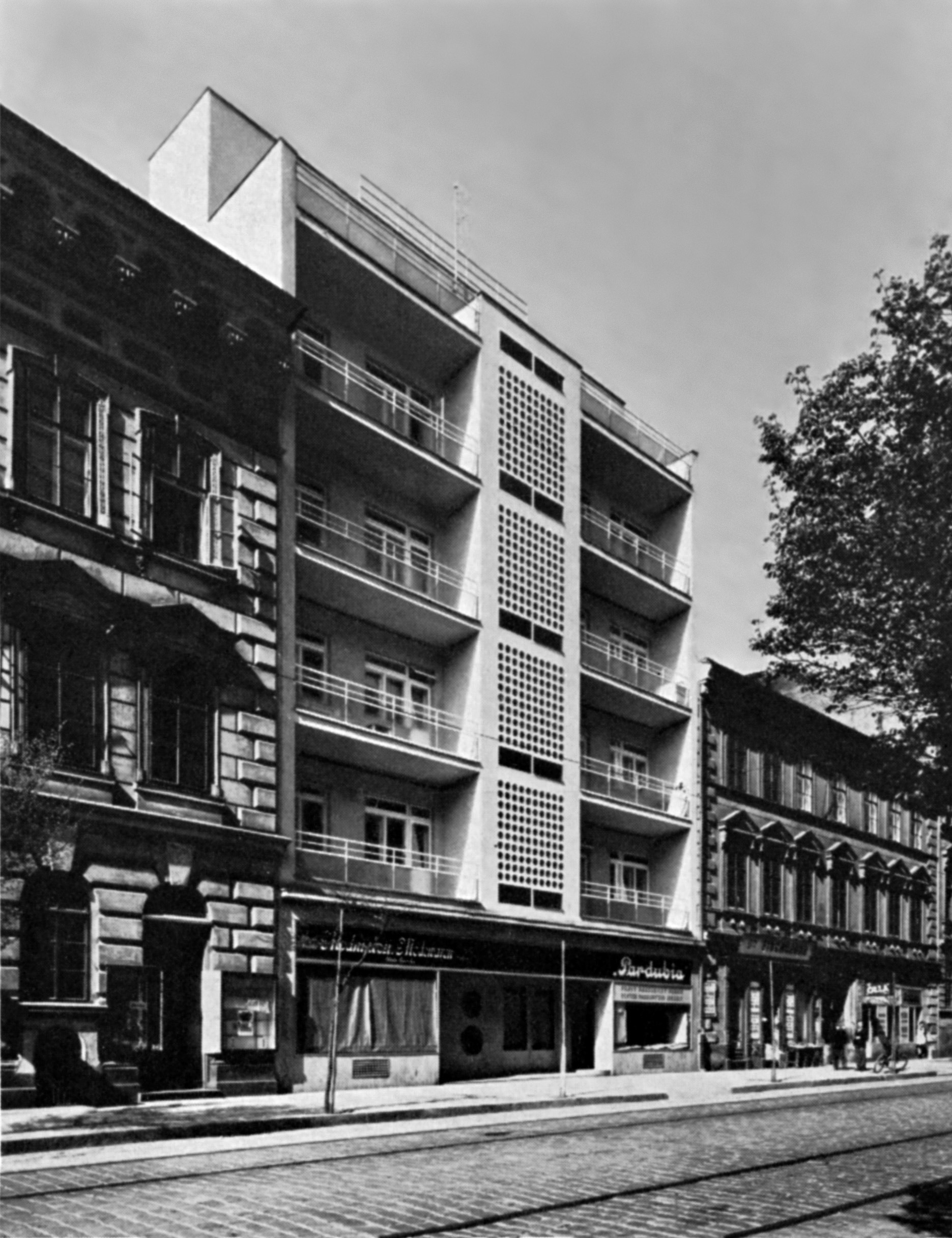 Dr. Karel Pur (1898-47), associate professor at the Brno Faculty of Medicine, decided to modernize his house and his private surgery room in the mid-1930s. The original two-level building in Údolní Street with two court wings was demolished and replaced in 1937 by a new building designed by Josef Polášek meeting the modern housing requirements. It also featured commercial areas and a surgery.
The height and mainly the form of this six-level apartment building stands out from the rest of the historicist development in Údolní Street. The segmented front is dominated by the central staircase risalit with round glass blocks, which form a characteristic feature of Polášek's works in the second half of the 1930s. The mass of the staircase is skirted by loggias on both sides; the top retracted floor makes room for a terrace. The ground floor, faced with travertine, is dominated by two vertically aligned round windows separating the modest main entrance and the entrance to the court; the corners feature the display windows of two small shops. The back facade of the house is only segmented by associated windows and a risalit with conservatories for the apartments. The ground floor was occupied by commercial areas, the caretaker's apartment as well as Dr. Pur's state-of-the-art surgery with a waiting room, laboratory and X-ray in the court part of the ground floor. The court was also delimited by the adjoining mass of garages and stores. The entrance to the elevated sloping garden boasts an interesting design consisting of a glass shelter with a slanting marquee linked to Karel Pur's apartment above his surgery. The owner's spacious apartment was situated on the elevated ground floor, due to the sloping terrain, and consisted of a central rectangular hall separating the service areas overlooking the street from the residential quarters with a  conservatory and access to the terrace and garden. The luxurious apartments on the upper floors featured a similar disposition and built-in furniture designed by Polášek.
The building suffered partial damage in one of the bombing raids of World War II. Each of the apartments, ranging in size of up to five-rooms, was divided into two units in the period of Communist rule. Today the house is again owned by Karel Pur's family, who have had it reconstructed. Although the original windows of the court facade were replaced with plastic ones, a number of original details of the interior as well as the facade have remained intact.