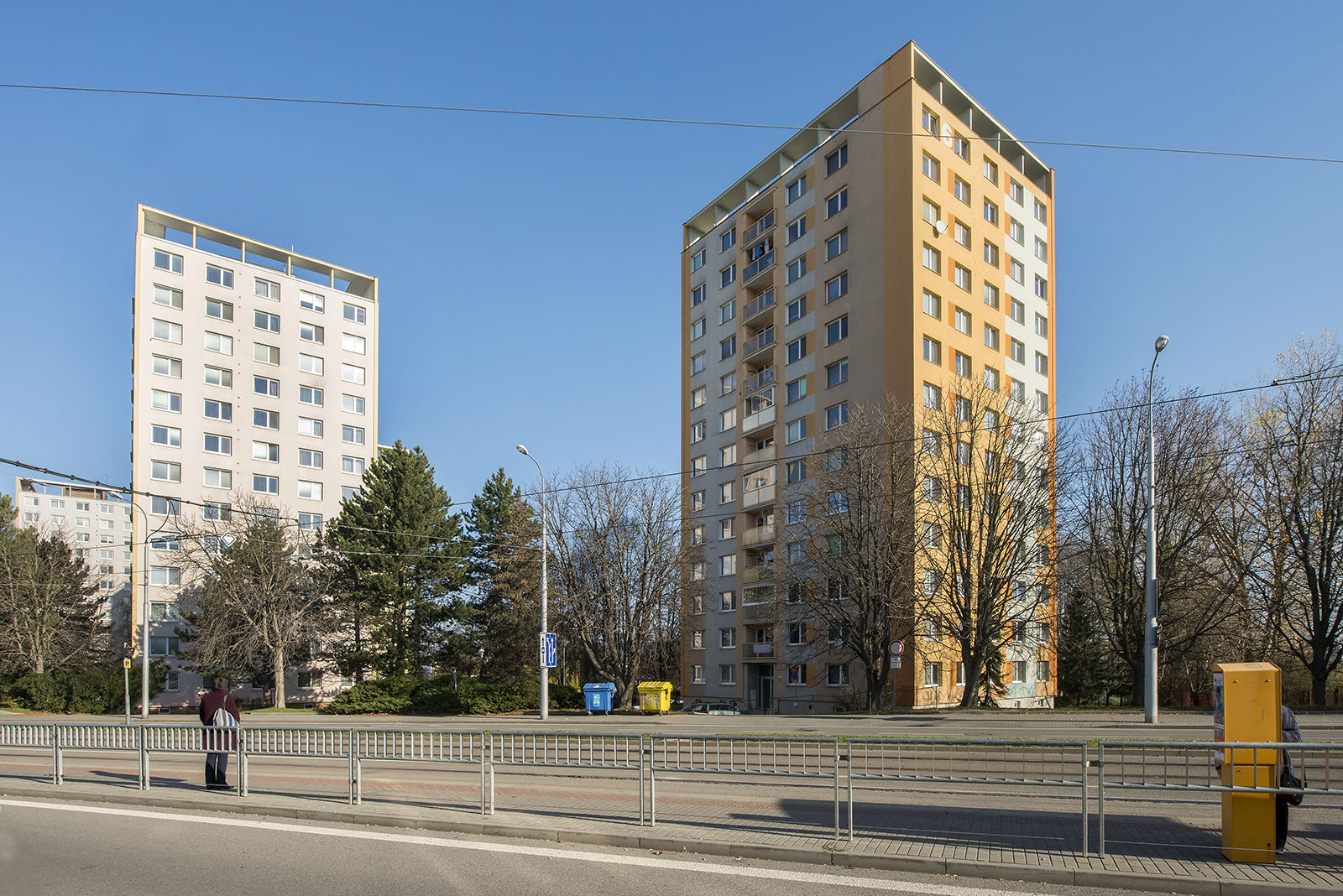 At the beginning of the 1960s, the Brno architects Ladislav Volák and Karel Zounek worked together on a residential project in the Lesná district that had been acclaimed for its high urban, architectural and artistic quality. They joined forces again just a few years later on a project to construct prefabricated apartment buildings in the district of Královo Pole, which were mostly intended for the employees of the local engineering plants. After extensive clearance of the original sites, which were largely rural in character, a vacant land area was created between the streets Purkyňova and Božetěchova, bordered in the north by a four-lane highway. This space was gradually filled with a range of diverse residential buildings constructed by means of the huge prefabricated panel technology used across the country known as T06B.

The Královo Pole housing estate is not a compact whole, as it is divided by the street Palackého into two separate, differently structured zones. There is a group of nine thirteen-storey tower blocks with six or seven apartments per floor in the vicinity of Herčíkova street that dominate the western side of the residential district. From there, five-storey and seven-storey prefabricated panel buildings in L- or U- shaped configurations with passageways through the corners meander down in the direction of Palackého street, following the contours of earlier developments of family houses. In the north, these buildings are surrounded by civic amenities in the form of a primary school of the pavilion type, a kindergarten and a health centre. There is a civic precinct known as Zagreb directly on Palackého Street that was intended to provide a smooth transition between the western residential zone and the group of buildings on the other side of the tram line. Located near the main tram stop that serves the estate, it is a two-storey, ramp-connected shopping precinct with a restaurant, a covered arcade and an artistically designed ornamental brick wall. The western side of Božetěchova street was conceived by the architects Volák and Zounek as an offshoot of four thirteen-storey high prefabricated panel buildings, each consisting of 48 residential units, characterized by massive supporting pillars facing the street, and single-storey buildings for technical functions which form an interconnected base. This housing estate, which contains more than two thousand housing units, suffers from a range of ills common to cities.  After such a large-scale clearance, the overly massive blocks, positioned too close together, intrude into the structure of the district. At the same time, there are too few recreational areas and the free movement of pedestrians in the residential areas and other places is impeded by busy roads directly entering the space.

Most of the residential buildings and some civic amenities have recently been renovated, which has included the insulation of facades and the replacement of balconies. The Zagreb precinct is covered with advertising, but is still more or less in its original state. Nevertheless, the public space between buildings would benefit from some careful contemporary modifications in order to enhance the recreational functions for its residents.