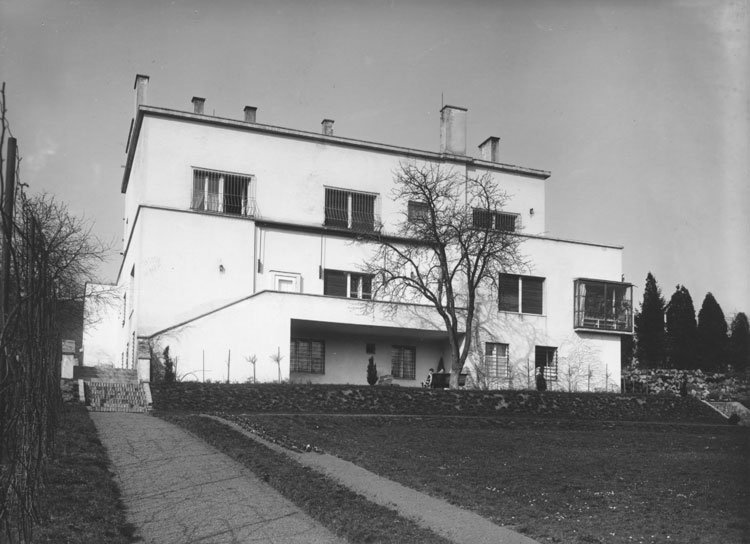 The villa built for Eduard Münz, the director of the Czech Union Bank, is the first of a number of villas designed by Ernst Wiesner for wealthy Jewish customers. This villa already features Wiesner's typical segmentation of the disposition of the structure into two wings with different functional objectives.
The house has an L-shaped ground plan and is situated in garden on a southward slope. The northern entrance yard is delimited by the service facilities and service wing; the residential areas face the garden. The individual floors are also functionally differentiated: the basement concealed rooms for the domestic staff, the ground and first floor were occupied by the family and the second floor housed rooms for guests and a spacious roof terrace. The bulk of the structure is reduced to a set of three simple blocks which copy the topology of the slope. Their horizontality was originally disrupted by the pronounced lines of the chimneys. No information about the original style of the interior has been preserved, the only preserved element being the stucco decorations on molding and mirrors in the music parlor on the first floor. Some of the furnishings were destroyed in the insensitive reconstruction performed in the 1980s by the management of the Agricultural Structures company, which used the villa at the time.
Originally, the villa was owned by the Czech Union Bank in Prague, but was later purchased by the Münz couple. However, Eduard Münz died in 1940 and his wife was deported to Terezín and Auschwitz during the war. The villa was acquired by the Emigrant Fund for Bohemia and Moravia in 1941 and nationalized after the war. Sons Heinz and Peter Münz, who served in the Czechoslovak army abroad, returned to Czechoslovakia after the war and received the villa back, but not for long. Half of the villa was owned by the Czechoslovak Ministry of Finance in 1951, afterwards by the housing authority at the Municipal National Committee in Brno. Today the majority owner of the villa is a development company.