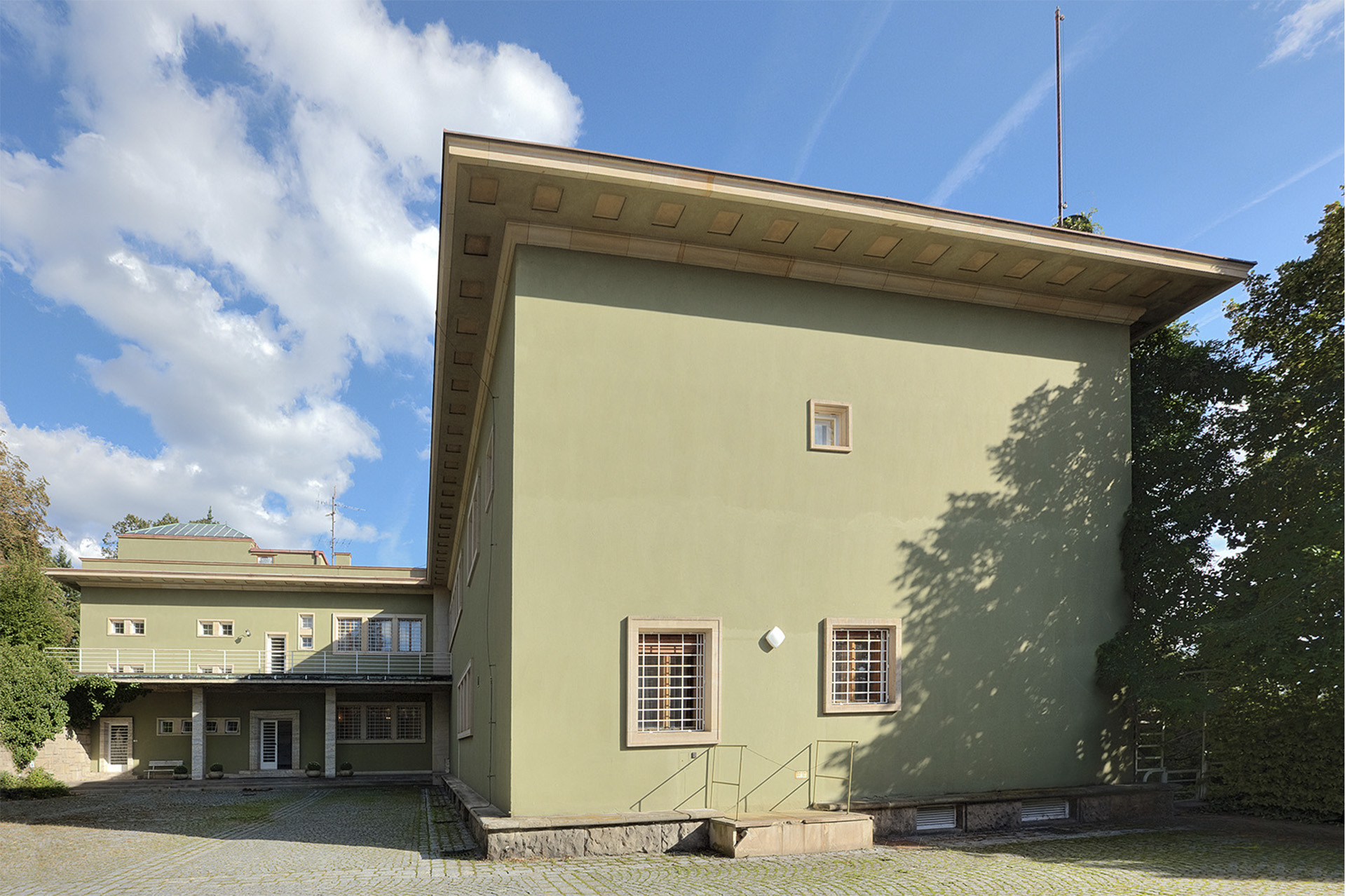 The villa on an extensive plot occupying a slope in Pisárky was designed by architect Ernst Wiesner in 1927 for Alfred Stiassny, an important textile industrialist, and his wife Hermine. The Stiassny family owned many villas and apartment blocks in Brno, yet this respectable residence combining a progressive architectural design and civic tradition certainly ranks among the most prominent.
The terraced mass of the structure consisting of two blocks on an L-shaped ground floor is embedded deep in the sloping garden. The only access from Hroznová Street is through a low gate consisting of the driver's apartment and followed by an alley leading to the central yard delimited by the ground floor with garages, support walls and the mass of the villa. The main entrance to the house is emphasized by a balcony portico and divides the ground plan of the villa into two functionally separated parts: the residential areas are situated in the right wing, whereas the service area occupies the left wing. The core of the residential wing consists of the gallery accessible via a lofty single staircase in the hall, which also provides access to the living rooms and dining room. The first floor housed the Stiassny family's bedrooms, playroom for children and the governess's room.
The service wing of the house adjoins the service, yet no less generous, staircase. It featured, in addition to rooms for domestic staff, the kitchen, ironing room and suitcase storage room. The villa is structurally divided into two tracts carried by ferro-conrete pillars. The closed yard is overlooked by the service facilities; the residential rooms with the adjoining terrace look out on the garden. A more intimate interconnection between the house and the garden was marred by the low ledges as well as adjustments made in the 1980s by architect Kamil Fuchs, who glazed in the originally exterior monumental loggia on the ground floor. Wiesner's purist exterior is incongruous with the historicist interior designed for the Stiassny family by Vienna-based architect Franz Wilfert. The decorative interior design (stuccos, coffered ceilings, marble fireplaces, historicist furniture) as well as its segmentation presumably expressed the owner's tastes; nevertheless, the disparity shifts the overall impression of the villa from functionalism towards classicist tendencies.
The villa was confiscated by the German State Police in 1939 and nationalized after the war. The villa as well as the entire extensive plot was acquired in 1952 by the Regional National Committee, which would use it for ceremonial purposes and as accommodations for state visitors to Brno until 1990s. In that period the "government villa" hosted a number of influential politicians and Communist officials. The interior of the villa underwent some adjustments according to designs by Kamil Fuchs and Adéla Jeřábková in the Normalization period; these involved the addition of luxury marble bathrooms to the individual rooms and cumbersome period furniture in the living rooms. Some rooms were filled with additional original chateau furniture, which only compounded the awkward hypertrophy of the interior furnishings. After 1989 the villa was acquired by the Fair Travel Brno company, which used the villa for business meetings or rented it out for a variety of social events. The villa is currently administered by the National Heritage Institute, which intends to set up a methodology center for the restoration of modern architectural landmarks.