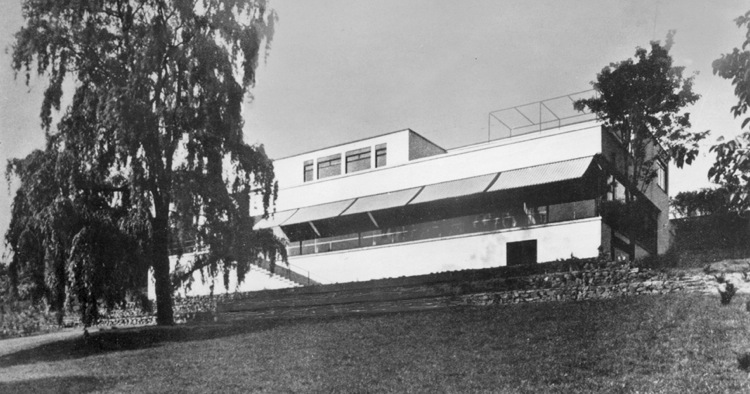 Villa Tugendhat is considered one of the key works of modern architecture. Such a formally and technologically unique architectural feat would never have originated had it not been for the cooperation between an outstanding architect and progressive investors. The young married couple, Greta and Fritz Tugendhat, decided to build a residence for themselves that would fully accommodate their ideas of modern living in 1928. The land occupying an area of 2,000 m² on a southern slope of Černá Pole was a wedding gift Greta had received from her father, an influential textile manufacturer of Jewish origin, Alfred Löw-Beer. The couple sought a suitable architect and eventually addressed Ludwig Mies van der Rohe, whose buildings they knew from Germany. The architect presented the completed design for the villa by the end of 1928. His design was based on the concept of Germany's pavilion for the international exhibition in Barcelona, which he adapted to the needs of his customers in Brno. The uniqueness of the design lies in the use of a steel support structure (the first time it had been used for a detached house), which enabled unlimited ways of handling the interiors as well as the generous glazing of the facade. The design produces the free-flowing space in the main residential hall and its merging with the exterior through large sliding windows.
The construction company of Mořic and Artur Eisler of Brno commenced the work in June 1929 and, under the architect's supervision, completed the villa in eighteen months. The three-storey villa is set on a slope and its main living spaces face southwest towards the garden. Therefore, the street facade consists only of the third level with a gracefully sunk entrance door and the garage with the chauffeur's apartment, the volume of which on the entrance terrace frames a view of the city with their shared roof. The entrance hall leads to the bedrooms of the parents, children and governess; these rooms also have access to the upper terrace overlooking the garden. A spiral staircase descends to the second floor with the flowing living space, which, owing to the generous glazing and conservatory, visually merges with the exterior. The villa's individual functional zones are merely hinted by impressive partitions or curtains. The dining corner is separated from the rest of the free space by a round ebony screen; the study and the sitting space are separated by a wall of Moroccan onyx which colours the room red at sunset.
The architect designed the interior furnishings along with his collaborators Lilly Reich, Hermann John and Sergio Ruegenberg; these involve bent tubular furniture (the Brno chair, the Tugendhat and Barcelona armchairs) and built-in wooden furniture from fine hardwoods manufactured by Jan Vaněk's interior design company Standard. The highlights of the entire residential space involve its technical equipment including the ingenious air conditioning system which cleans the air and freshens it with sea salt and the large windows in metal frames, which can be fully rolled down into the floor. The dining area provides direct access to the terrace with the staircase and the garden designed by Mies and Brno garden designer Markéta Roderová-Müllerová. The service areas of the villa are accessible via a separate entrance from the street and consist of the kitchen and domestic staff rooms on the second floor as well as vast technical facilities on the ground floor.
And yet, the professional response to the architectural work was varied. While Philip Johnson, the American architecture theoretician, who held an exhibition of Mies's works in the Museum of Modern Art in New York in 1947, compared the villa to the Parthenon in Athens, domestic architects, at that time preoccupied with issues of affordable housing, reproached its pomp and luxury represented by the expensive materials and excessive spaciousness. Czech theoretician Karel Teige dubbed the villa the peak of snobbery and held it to be the dead-end of modern architecture. While the owners were able to fully appreciate the villa's strong points, they were forced to abandon it seven years later to escape the Nazi threat. The Tugendhats fled to Switzerland in 1938 and the villa, Jewish property, was seized by the Nazis. During the occupation, the villa was used by the director of Klöckner-Werke, Walter Messerschmidt; it also housed the design department of the aircraft engine manufacturer Flugmotorenwerke Ostmark. Having liberated Brno, Soviet troops settled in the villa for a short time, during which they managed to devastate the house completely.
Before the house fell into state hands in 1950, it housed a ballet school, then the rehabilitation department of nearby Children's Hospital. Thanks to restoration efforts championed by Brno-based architect František Kalivoda, the villa was listed as an object of cultural heritage and has been protected since 1963. In 1968, an exhibition presenting the works of Ludwig Mies van der Rohe was held in Berlin and part of the exhibition could also be seen at the Brno House of Arts. The Brno exhibition also presented reconstruction plans for the villa; these were not implemented until 1985, based on designs by Kamil Fuchs and Jarmila Kutějová. By that time the villa was already owned by the City of Brno, whose representatives used the villa as a conference centre and accommodations for important visitors. The last time the villa served political purposes was in 1993 when it was the site for the signing of the agreement to separate Czechoslovakia. The house has managed by the Brno City Museum since 1994 and is open to the general public. The villa was declared an object of national cultural heritage and was also inscribed on the UNESCO World Heritage List in 2001. Following many delays, the vital reconstruction of the entire villa was finally launched in the summer of 2010.