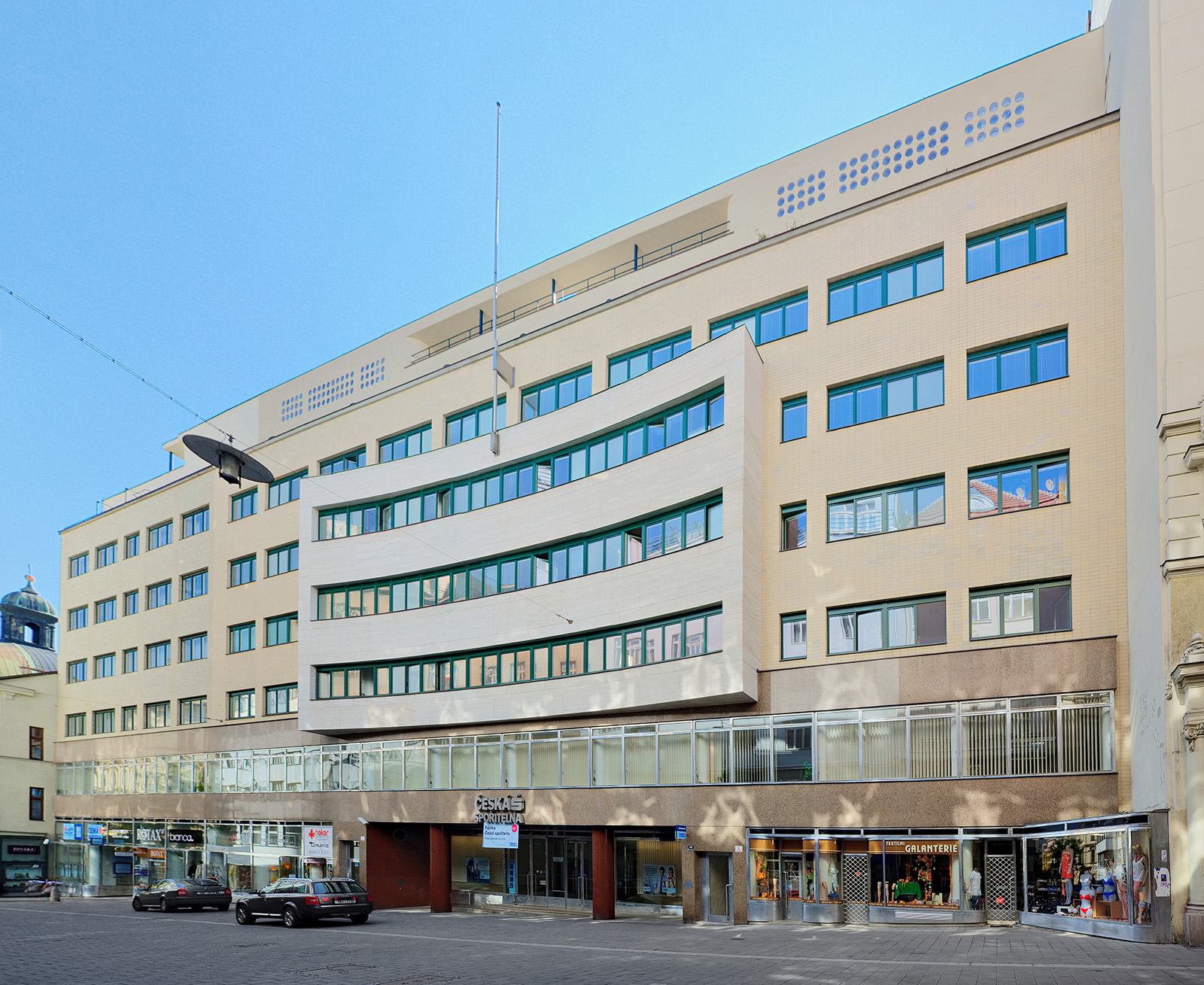 The First Moravian Savings Bank found its original headquarters, i.e. the historicist building in Jánská Street, no longer adequate in the mid-1930s. The architectural competition announced in 1936 for a new building was won by Otakar Oplatek and Josef Polá ek. The savings bank's  board of directors eventually decided to select both architects and also to invite Heinrich Blum, whose design was purchased after the competition. The company's crucial requirement was that the office should remain in operation during the entire construction. Therefore, the architects designed two buildings, one of which was built earlier and served as a temporary seat that was converted into office and commercial areas after the completion of the second part with the central hall. The assignment also involved a commercial ground floor and apartments in the upper stories.
In spite of the varied functionalities of this building, the architects succeeded in giving the structure a  uniform and respectable character. The fronts of both buildings are harmonized by the light ceramic cladding and are dominated by the concavely curved horizontal of the travertine risalit with ribbon windows. Visitors to the savings bank first enter the oval foyer with black and white marble panelling, the dynamics of which is enhanced by the curve of the staircase and the circles of glass block windows upstairs. The foyer leads to a spacious lobby with bank counters, above which a mezzanine with the large round windows of the controlling department is suspended on ferro-concrete rods. The lighting of the entire area, whose rectangular disposition, the railings on the gallery and round windows give the impression of an ocean liner, is provided by the spectacular skylights.
In 1939, the company launched a competition for the interior design; Heinrich Blum, however, was no longer eligible due to his Jewish origin. The company selected the design by painter and graphic artist Emanuel Hrbek; however, the relief inscription over the entrance was the only element of this design to be implemented.In designing the building great attention was paid to the safety of deposits protected by cutting edge technology. The basement held large vaults made of ferro-concrete reinforced with steel and featuring a  special lock protected by a password. The entire financial institution was guarded by a mechanical burglar alarm and signaling system; the main entrance featured a six-meter sliding bar gate which would shut when an electronic button was pressed at the bank counters. The technological innovations facilitating the operation of the financial institution also included a waiting customer call system; customers could also use a  night safe. The areas of the savings bank were air conditioned and, for the first time ever, largely lit by neon lights.
This building with its unique architectural and functional facilities is currently the seat of the Czech Savings Bank. As its reconstruction in 2008 again made use of both adjoining buildings, the full interruption of operations was once more avoided. The authentic condition of the building has been preserved to a large extent, except for the insensitive replacement of the original steel window frames with plastic.