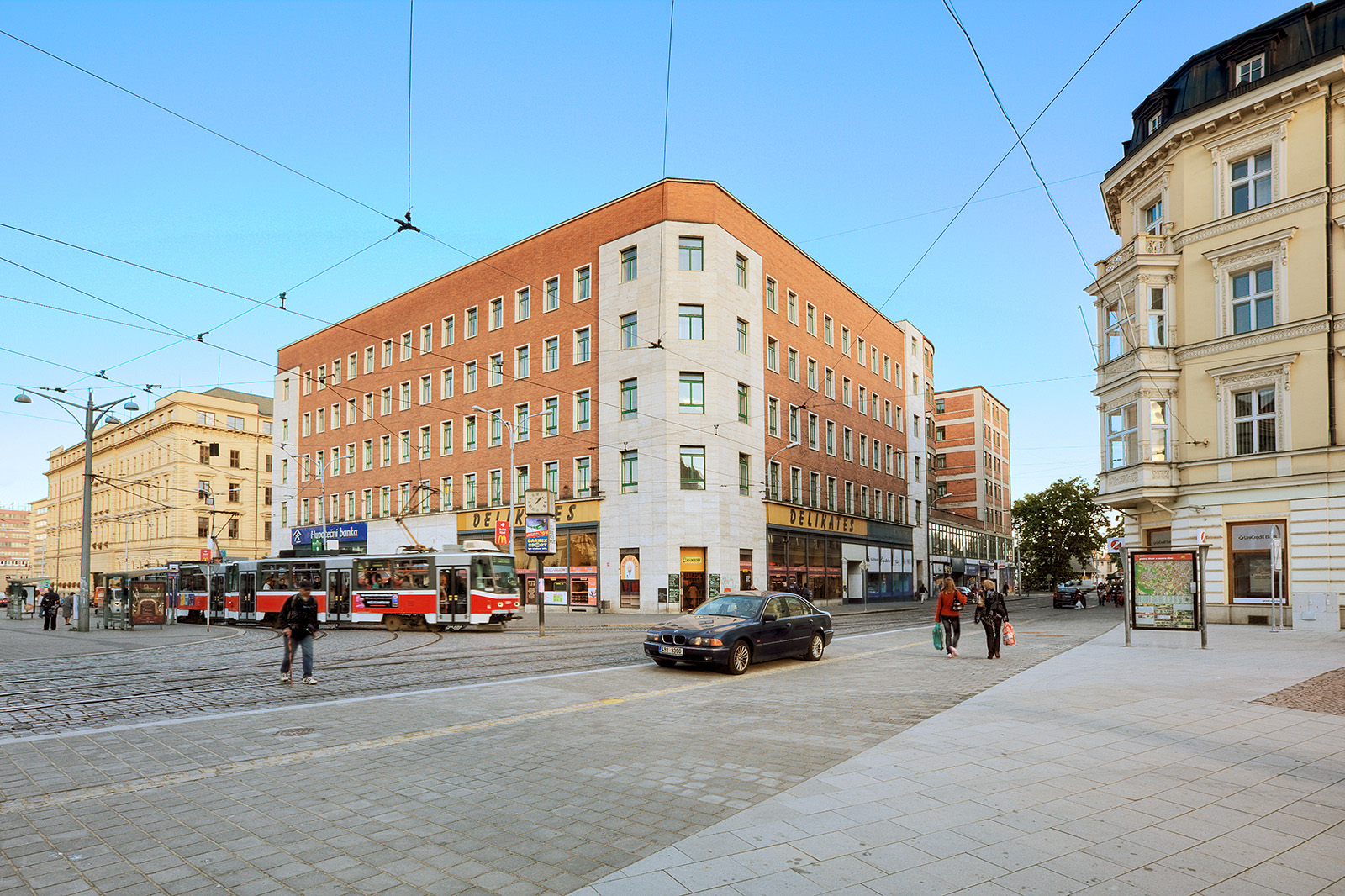 Today's compact block of the Morava Palace situated between Malinovského square and Divadelní and Benešova streets has an intriguing construction history. The plot was originally occupied by the so-called Doret Court, whose main front faced the Mahen Theatre, and the adjoining vaudeville hall.
In 1926, the vaudeville hall was purchased by Hermine Stiassny, the wife of influential textile manufacturer Alfred Stiassny; the new owner wished to convert the building into a hotel. Therefore, she announced an international architectural competition, addressing Peter Behrens, Jacobus Oud, Archibald Campbell and Ernst Wiesner. However, she soon changed her mind and decided instead to build a commercial and residential building designed by Ernst Wiesner, who had won the original competition. In 1928, while construction was still underway, Hermine Stiassny sold the building to the Moravian Country Life Insurance Company. The new owner decided to finish the building according to the original plans.
The formal design of this multi-purpose building was a far cry from the moderate esthetics of functionalism at the time. The facade grid of the ferro-concrete structure gracefully copies the curve of Bene ova Street and expressively breaks into Divadelní Street. The rupture of the mass of the structure allows southern light to reach the apartments on upper stories. The two-level glazed base contained shops on the ground floor; the first floor was occupied by offices and a spacious café, which was extended in the 1930s with a semi-circular terrace that ran around the corner and featured unique fan-like sun blinds. The varied offer of public space in the building included a basement music hall and spacious cinema.
In 1935 the Moravian Country Life Insurance Company decided to reconstruct the building of the neighbouring Doret Court in Malinovského square. Several well-known Brno architects were invited to submit their designs (e.g. Bohuslav Fuchs, Bedřich Rozehnal and Bohumil Babánek). Eventually, the client selected Wiesner's design, which united both buildings in a single compact block. However, some of his contemporaries criticized his project for being traditional and conservative. The brick facade of the designed structure merged with that of the already completed building, and its prominent mass forms a commensurate counterpoint to the bulk of the Mahen Theater across the way. The original four-level structure of the Doret Court is commemorated by the segmentation of the windows (which were originally larger) as well as by the arches on the ground floor visible behind the display windows. The polygonal corners faced with travertine, the majestic central portal and the full mass of the top floor enhance the emphasis the insurance company put on respectability. The pronounced travertine corner dominates the view from Kobližná Street.
The disposition is traditional, so the commercial ground floor and entrance foyer are linked to a triple tract of office areas accessible via an interior corridor. The full brickwork of the conventional street facade is counterpointed by the progressive industrial esthetics of the inner court facade. This facade is dominated by the glass staircase wall of the entrance hall as well as the glass vertical of the elevator tower of the Morava Palace. Hence, Wiesner's design did not attempt to present the most progressive vision in line with the period's  functionalist principles. His contribution can be seen in his sensitive response to already existing urban development, its completion and an effort to create a perfect urban synthesis.