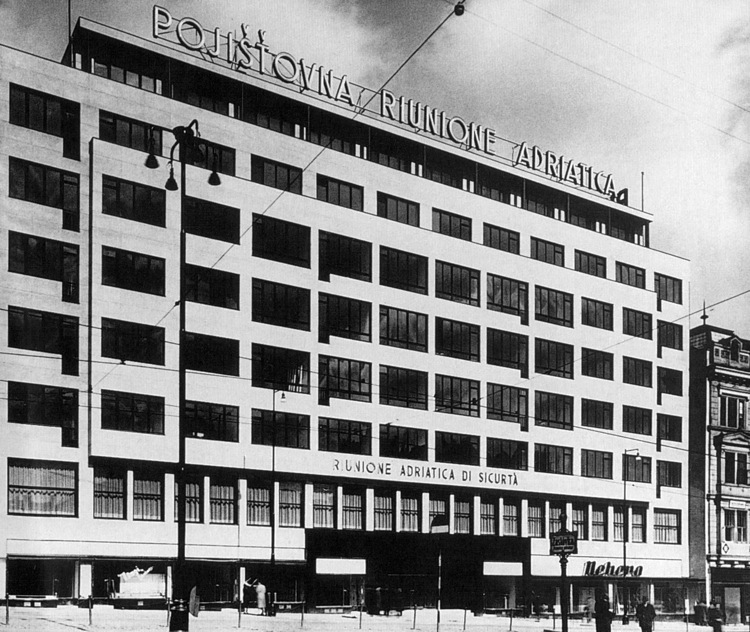 Riunione Adriatica di Sicurtà, an Italian insurance company, was established in Trieste in 1838; as the town was part of the Austro-Hungarian Empire, the insurance company gradually spread a  network of subsidiaries across the entire monarchy. The operation of the company's Prague branch is linked to the Adria Palace designed by Pavel Janák in 1925, which represents the climax of rondo cubism, whose bloated decor was tied to the search for a Czech national architectural morphology. The company's later seat in Liberec, designed by Max Kühn in 1932, represents a rather classicist concept that draws upon German historicism. The company's first branch in Brno was set up in 1906; however, the company did not build properly formal headquarters until the 1930s, when it chose a plot in Nádražní Street in the center of Brno. This building was designed by Karel Kotas, who had also designed the company's Ostrava branch ten years earlier. Unlike the expressive variation with relief figural decoration and a corner turret in Ostrava, the company's Brno office embodies the austere forms of functionalism.
This spacious, seven-level building is situated at the site of former ramparts near the railway station. The building housed not only the insurance company's offices, probably situated on the ground and first floor, but also apartments and commercial areas on the street front. The plain facade with a central four-story bay and retracted top floor is segmented by a grid of four-part windows. Its symmetry, monumentality, pronounced base as well as stone cladding reveal the proximity of the modernist architectonic expression to the legacy of classicism. Kotas's  design of the generously conceived entrance hall with stone panelling also features stylized figural scenes. At present, the display windows on the ground floor have been replaced by fast food counters; the upper stories hold offices and apartments.