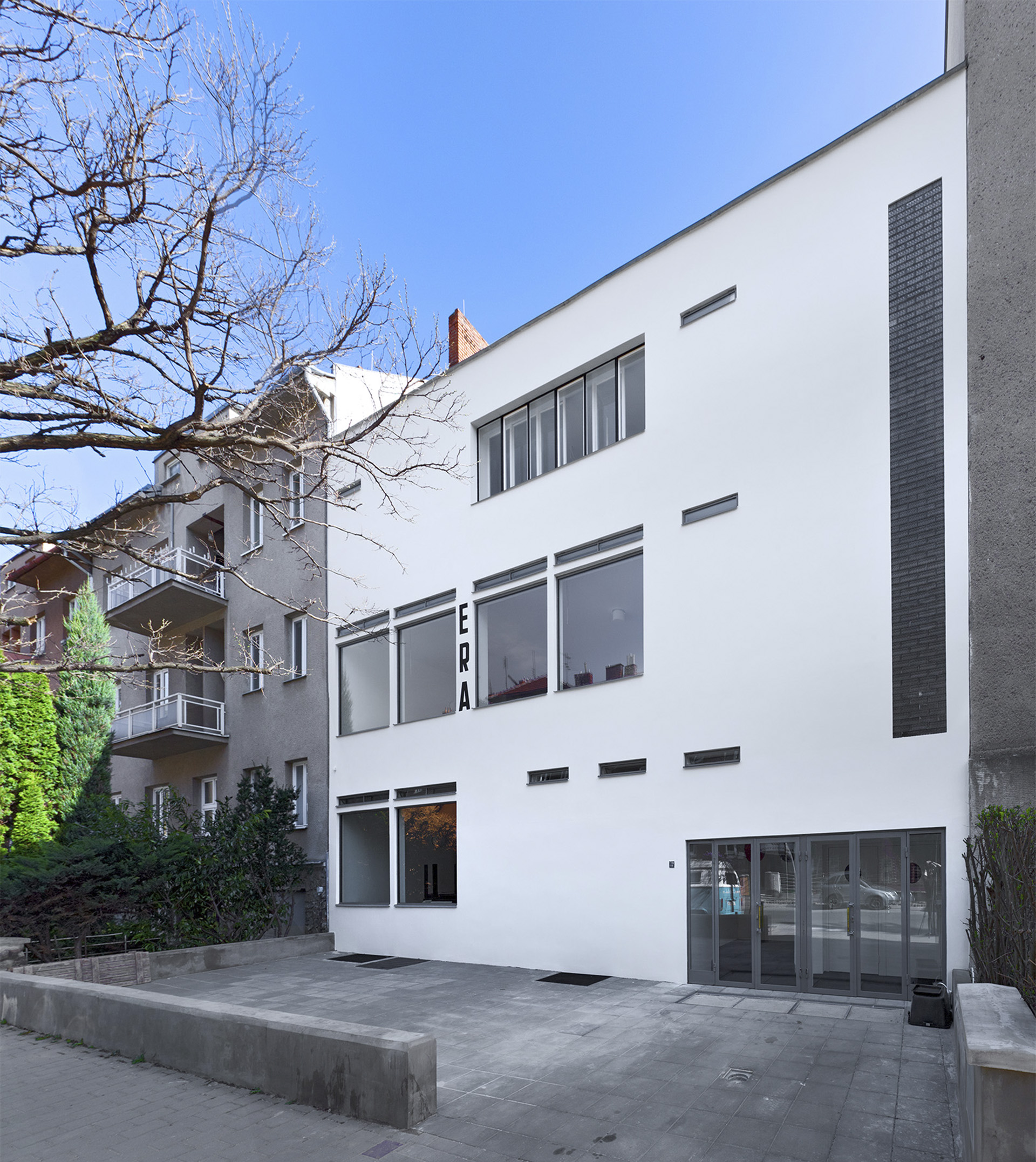 Architect Josef Kranz designed a residential building with a café for Josef Špunar in 1927. The young graduate from the new Faculty of Architecture at the Czech University of Technology drew upon his knowledge of Dutch architecture, mainly the De Stijl avant-garde movement. This artistic platform established in 1917 by architect J. J. Pieter Oud and painter Theo van Doesburg sought to express the natural manifestations of nature as well as humans by means of elementary shapes based on horizontal and vertical axes and on basic colours (white, black, yellow, red and blue). In architecture and painting these ideas were displayed in abstract compositions of rectangular forms; the ideas also exerted an enormous influence upon the further development of architecture towards functionalism. The building is conceived as a system of intersecting right-angled areas which open up to the exterior.
In 1924-25 Oud designed the De Unie Café in Rotterdam, whose street facade consists of a geometrical composition of windows and colour fields. Josef Kranz drew on a similar concept when designing the Era Café, the front of which is segmented by a minimalist composition of several types of windows and an inscription with the name of the establishment. The large display windows reveal the interiors of the café on the ground and first floor followed by the ribbon window of the living room of the owner's apartment. These private areas on the second floor are accessible via a staircase whose glass concrete window on the right comprises the only vertical line in the facade. The ground floor of the café with Thonet furniture is dominated by the dynamic volume of the spiral staircase. Entirely in line with the ideas pursued by the De Stijl movement, the staircase replaces interior decoration, just like the colours of the walls (pale blue, white) and floors (red xylolite slabs), since the role of an abstract work of art is assumed by the architecture itself. The opening of the interior and its merging with the exterior is ensured by the roof terraces on all floors of the garden facade.
World War II did not bring about any significant changes; which cannot be said about the years following the Communist takeover. The building was seized and converted into a beer pub managed by the company Restaurants and Cafeterias Brno II. Further modifications were made by the next user - the University of Agriculture in the 1970s and 1980s, in spite of the fact that the building was declared an object of cultural heritage in 1977. The most critical moment, when the very existence of the structure was endangered, came when the house was returned to its rightful heirs after 1989. They attempted to restore the original condition of the house, yet a lack of coordinated management of construction carried out by an unreliable company, a lack of professional conservation supervision and financial resources posed a direct threat to this cultural monument. Unheated and uncompleted, the building was in danger of collapsing. The house decayed for several years until a suitable investor was found to return this unique building to its original function and appearance in 2011.