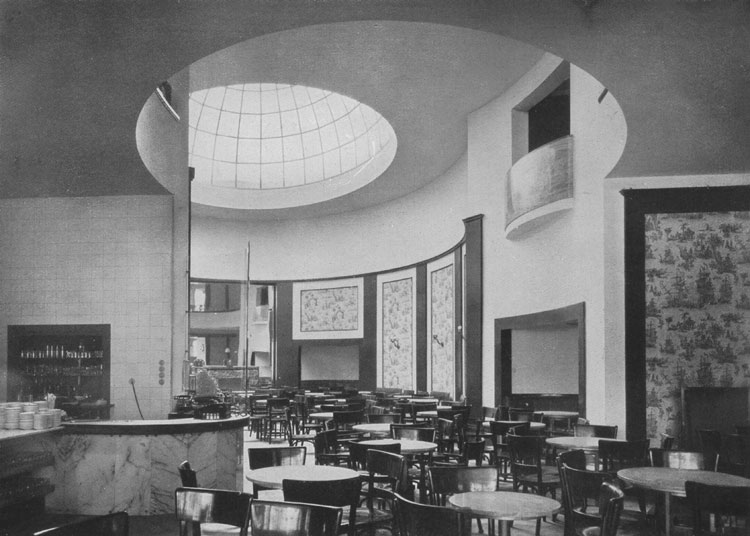 Ernst Wiesner designed one of Brno's grandest cafés - the Esplanade Café - for Alois Strompf, a well-known café owner. This gathering place for Brno's intellectual elite was situated on the corner of Rooseveltova and Jezuitská streets, in a block heavily damaged during the bombing of Brno in 1944; in the end it was demolished completely to make way for the majestic Janáček Theater in the 1960s.
The Esplanade Café was the result of the reconstruction of the previous Habsburg Café, in which Ernst Wiesner showed the best of his interior designs. The café was situated in the basement, on the ground and first floors of the corner building, which Wiesner extended with a two-level hall with a glass roof in the inner yard. The outwardly right-angled mass of the hall surprisingly revealed a Baroque dynamism in the elliptic internal floor plan with cylindrical niches and a loggia. The entire area enhanced by an oval gallery intersecting the ellipsis of the hall was lit by a skylight cupola. In addition, the two upper levels were optically connected by a suspended glass wall on the street facade. It was the first time a structure of steel pillars drawn inside and enabling the glazing of large areas without any visible supporting elements on the facade had been used in Brno. The access to the apartments on the upper floors belonging to Alois Strompf's family was conceived in an interesting way – they were reached through the café.
The café's facilities included a state-of-the-art kitchen open to the café and serviced by means of food elevators which brought up fresh desserts made in the basement. Architect Ernst Wiesner and other Brno architects of Jewish origin were regular guests at this café.