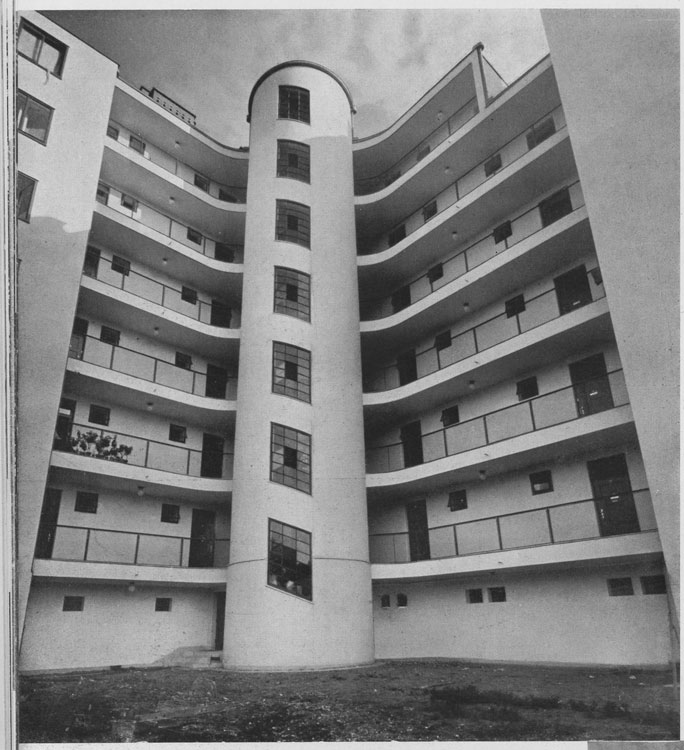 Wiesner designed this block, with small flats accessible via a gallery, for the Freundschaft (Friendship) building cooperative on Rybářská street. This is his sole contribution to the topic of minimalist flats and social housing as such. He only dealt with a similar project involving a limited budget and specification while working on designs for the Nový dům (New House) colony, where he focused on individual housing in small single-family residences.
This corner building on Rybářská street, which draws on the tradition of blocks of flats with galleries, reveals Wiesner's traditional practicality, rationality and grace. The gallery was only overlooked by the entrances to the flats and the bathroom windows, which were present in every unit; for the sake of economy the two-room flats featured residential kitchens. The design of the galleries is the most intriguing element. Their gracefully curved horizontal lines are intersected by the cylindrical bulk of the spiral staircase in the corner of the house. It is also remarkable that the emphasis on cost-effectiveness meant that this seven-level residential building did not originally feature a lift, which was then a standard part of all newly built blocks of flats.