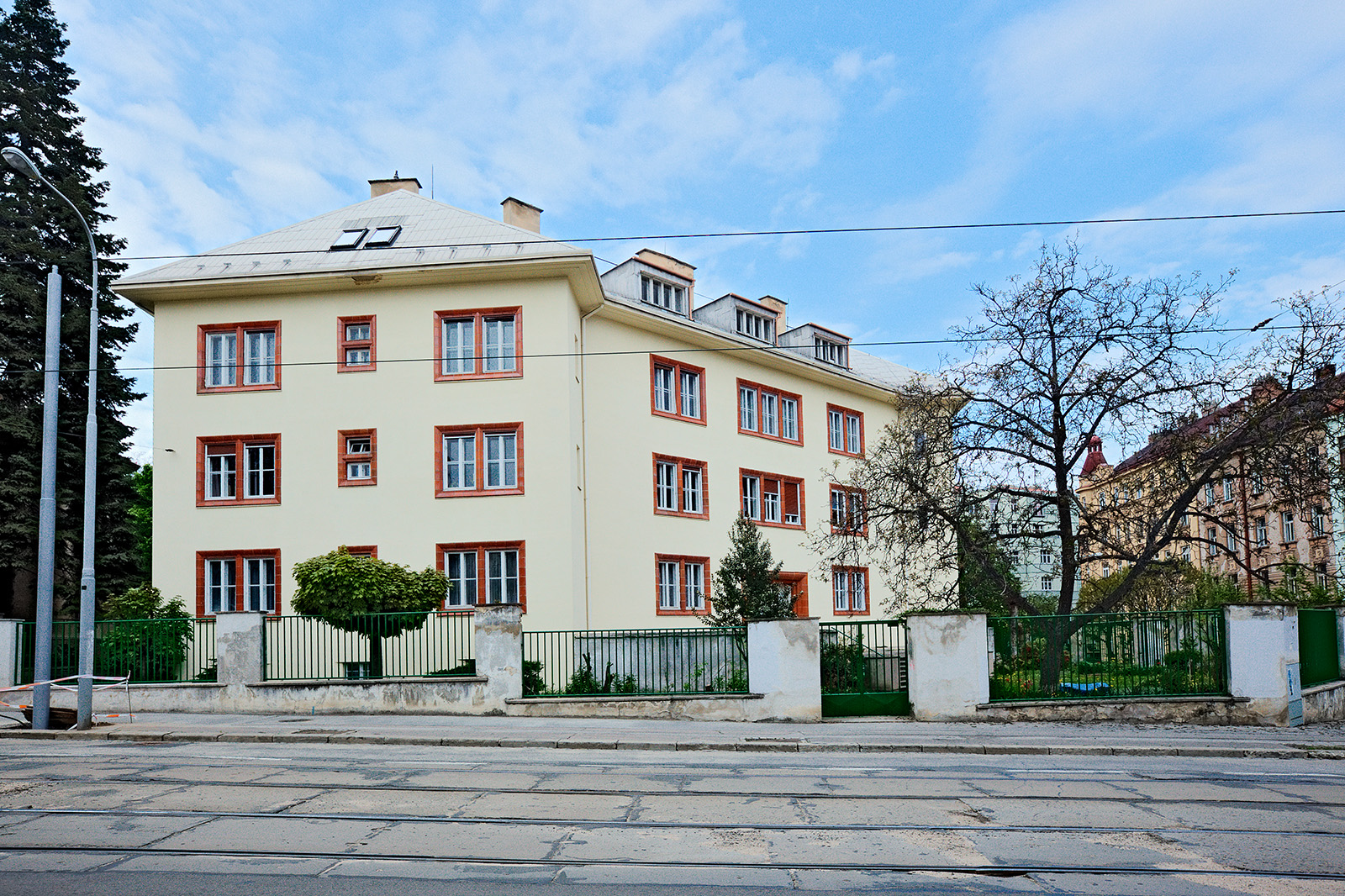 The design of the apartment building for industrialist Wilhelm Gutmann was Wiesner's first large-scale contract after returning from his studies in Vienna. The corner plot skirted by Údolní and Bratří Čapků streets was occupied by the first purist structure in Brno. Its smooth facade was an utter novelty in a city which had favoured the Art Nouveau and historicist decorations and where  Vienna modernism was virtually unknown. From the very beginning of his career, Ernst Wiesner set forth clear and rational rules which pushed the architectural thought away from mere enchantment of the facade towards an emphasis on the spatial and functional layout of the interior. The historicist tendencies apparent in Friedrich Ohmann's, (his teacher's) studio exerted much less influence upon Wiesner than designs by Adolf Loos, whose "house without eyebrows" in Michaelerplatz had aroused public outrage in conservative Vienna.
The smooth facades of Gutmann's apartment block are only segmented by the ceramic bands of the windows and entrance. The orientation of the symmetric entrance facade towards the corner accents the junction of two streets and, at the time, brings sunlight from the south to residential rooms. In addition, the building forms a smooth transition between the urban and villa development at the base of the hill Kraví hora, which also determines its function. Although it is an apartment building, the original tenants were only Gutmann family members. Their apartments, which sometimes occupied an entire level, were separated by a central corridor into three tracts. The service areas faced north, as did the staircase lit by one of the first continuous staircase windows in Brno. The only components of the interior furnishings preserved today include the oak staircase in the corridor, the beam ceiling and fireplace in one of the apartments, wooden blinds and brass window handles. The fact that these are often the only preserved elements of the original furnishings in many of Wiesner's buildings is remarkable.
Wilhelm Gutmann sold the house to JUDr. Felix Redlich, who had garages with storage spaces built in the garden in 1929. As the owner was of Jewish origin, the villa was confiscated during the German occupation and then nationalized on the grounds of Beneš Decrees in 1946. In 1953, the ownership was transferred to the Brno Housing Company; today the apartments are privately owned.