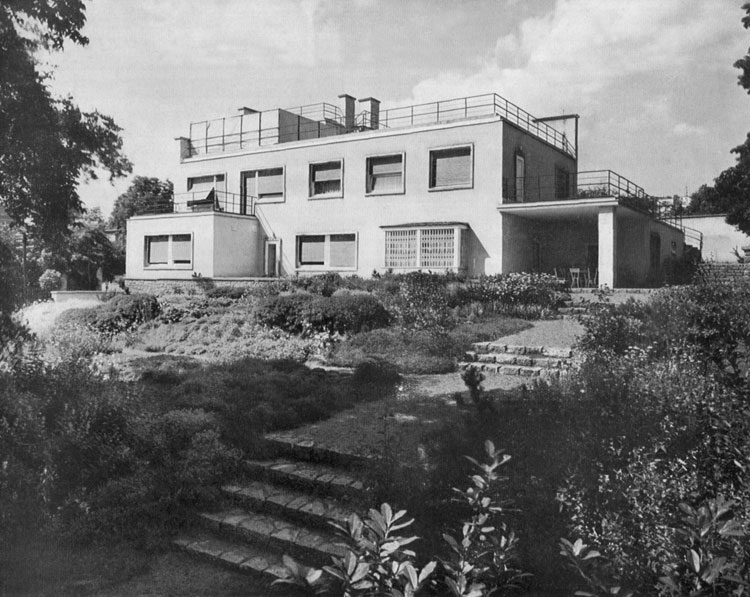 The villa was built on a sloping street in the Brno quarter of Pisárky in 1930 as the residence of Gustav Haas, the director of the Brno subsidiary of the Anglo-Czechoslovak Bank. This is one of the villas which Ernst Wiesner built in this area for wealthy Jewish citizens and whose architectural design stems from similar dispositional schemes. However, the environment surrounding the Haas Villa was adversely affected by the Normalization Era construction of student dormitories and the monumental Faculty of Economics of Masaryk University in the 1990s.
As is also the case with the nearby Münz Villa, Stiassny Villa and Neumark Villa, the mass of the villa is organized around the northern entrance yard defined by the service wing and the main residential part with a protruding garage. The varying height of the villa is related to the sloping terrain on the south side. Omnipresent terraces with elegant railings give the villa its typical ocean-liner appearance. A purely functionalist impression is marred by the travertine window architraves and the original grayish-blue shade of the facade. Thanks to pictures in period professional literature we know the original furnishings of the sitting room and dining room, of which only the fireplace has been preserved.The most pronounced features depicted by the photographs include the decorative beam ceiling and geometrical parquet floor. The austere Classicist furniture - chairs with tall backrests, a massive table and a chest of drawers - enhanced the historicizing impression of the interior, which was further emphasized by historical paintings in decorative frames. On the other hand, the service areas were equipped with the latest technology. Like Alfred Stiassny's villa, this building also features a steep contrast between the modern architecture and traditional interior design that presumably expressed the owner's taste.
Being of Jewish origin the Haas family had to abandon the house in 1939; there is no information about their subsequent fate. The villa was nationalized in 1948, transferred to the possession of the Czechoslovak state in 1955 and then used as the seat of the Brno Municipal National Committee. The villa was divided into several apartments which have recently been sold to private owners.