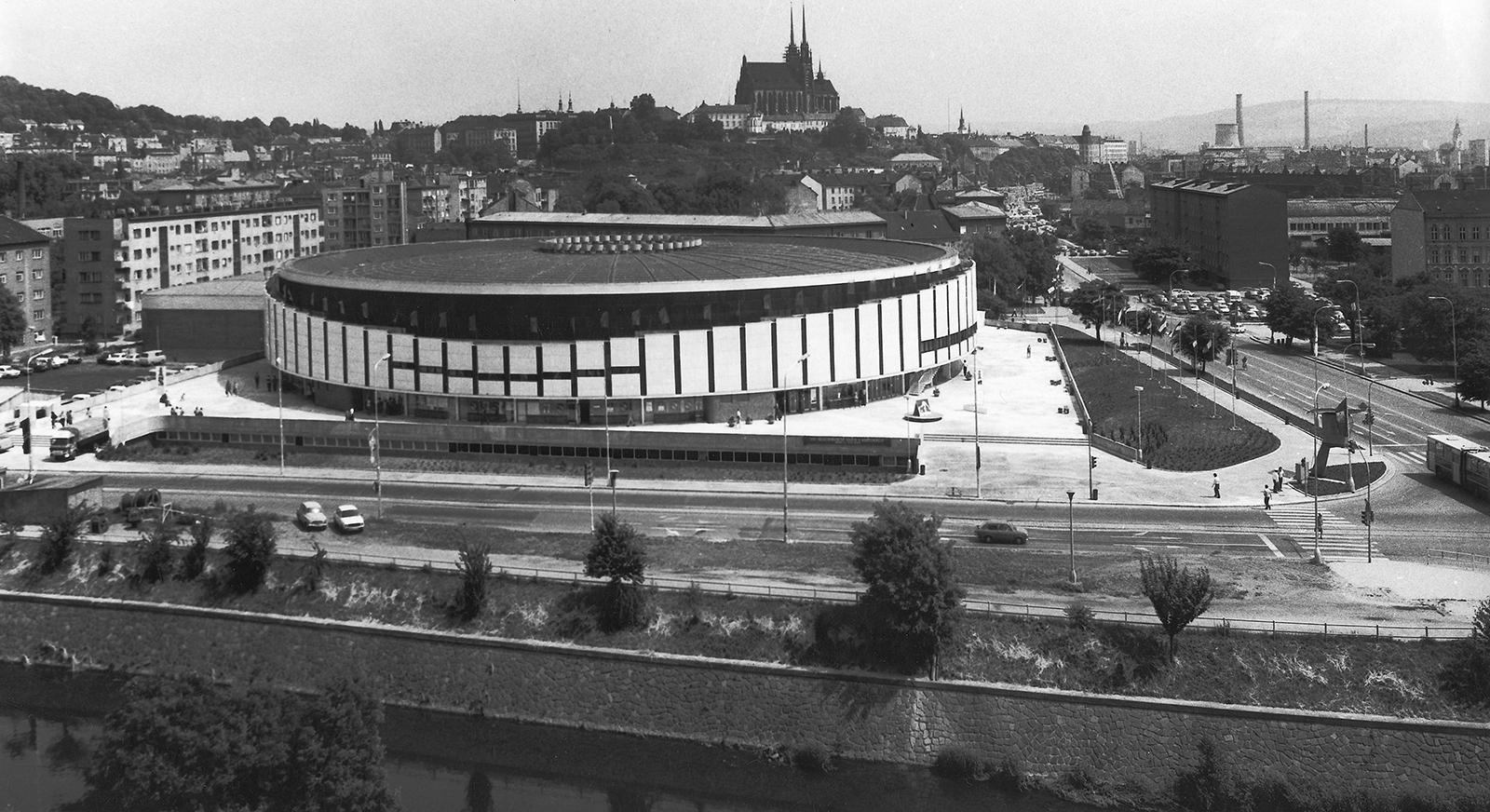 Set on a busy junction on the outskirts of Staré Brno district near the river Svratka, Rondo Hall was designed primarily as a winter sports facility, mainly for ice hockey, but which could be adapted for non-sporting purposes. The design for the hall was drawn up in 1971 by the architect Ivan Ruller, who in the same period was also working on plans for a building for the Karat goldsmith’s cooperative near the Měnín Gate. In both cases, he had to deal with problem of setting new buildings within the context of the historical city and cityscape and he discharged this duty with respect for the existing urban structure of the adjoining zones. Rondo, which was originally named Náplavka after an adjacent street, follows the high-rise apartment buildings in its immediate vicinity. It was built as part of the volunteer labour programme called ‘Intiative Z’, which is the reason it took ten years to complete. Rondo finally opened in 1982 on the occasion of the World Bowling Championship. In 1989, a smaller rectangular hall for figure skating was added onto its northern side.

The circular hall, built for a capacity of over 7,000 spectators, is covered by a monumental welded steel roof structure with a diameter of 65 metres. Due to the unstable sandy soil below it, the structure of the building was set on concrete piles. Rondo’s exterior cladding is divided vertically by hanging sandwich panels of various sizes. It was clad with white-glazed hollow-core slab, with which the architect created a sophisticated rippled façade, giving it a three-dimensional effect in combination with advancing shadows of the day. In several zones around the hall, the lower part of some panels is divided by a trio of windows. On the ground floor, which is lined with brick cladding, Ruller created a narrow arcade. By the hall, a wide flight of steps led the mass of spectators arriving from the city to a raised walkway area and the glazed main entrances to the sports arena. Around the lower central area of ​​the stage, terraces for sitting and standing wound around the perimeter of the hall. Due to the visible structure of the roof, the building’s interior had a distinctly hi-tech appearance.

Today, the hall is named DRFG Arena and still serves as the city’s main ice-hockey stadium, while hosting other sporting events and concerts. There is now a supermarket on the ground floor. In the years 2009–2010 it underwent a major modernization, in which the author of the original project, Ivan Ruller, participated. During this period, the facilities for athletes and spectators were modified, some technological features and utilities were changed, the seats were replaced, and some lifts and other facilities for accommodating athletes were added. Three original low reliefs on a sporting theme by the Brno sculptor and painter Ctibor Bayer were also removed during the reconstruction. Ruller’s original distinctive circular configuration and easily recognizable design have been preserved. Even so, the hall is inappropriately used as an advertising hoarding by its owner, as many of its perimeter walls and architectural details are covered with large-format advertising banners.