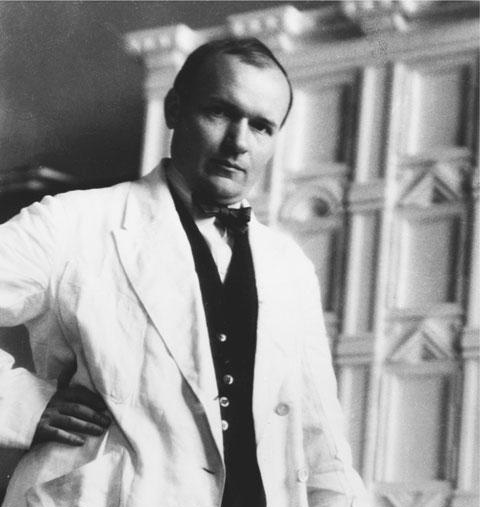 Pavel Janák, architect, designer and theoretician, was born in Prague on 12 March 1882. He studied at the Czech Technical University in Prague and German Polytechnic in Prague beginning in 1899. In 1906 he went to the Vienna Academy, where he studied in Otto Wagner's studio. After his return to Prague he worked briefly in Jan Kotěra's studio. In 1909 Janák was employed as an architect in the bridge construction department of the Prague Building Authority. In 1911 Umělecký měsíčník (Artistic Monthly) published Janák's essay Hranol a pyramida (Prism and Pyramid), i.e. the theoretical foundation of cubism in architecture (Jakubec House in Jičín), which was transformed into the so-called rondo cubism after World War I(the crematorium in Pardubice, Adria Palace in Prague). From 1921 onwards Janák was the head of the architecture studio at the Academy of Arts, Architecture and Design in Prague. In 1923-29 he was a member of the State Regulation Commission, which managed the urban development of Prague (including the urban design of the Baba estate). He also designed the Juliš Hotel on Wenceslaus Square, sculptor Josef Mařatka's villa (1933) and the Czechoslovak Hussite Church in Vinohrady. Later, he focused on the reconstruction of historic buildings (modifications to Černínský Palace, with Otto Fierlinger, 1928-34, reconstruction of the Old Town Hall, 1936) and became the architect of the Prague Castle (Hvězda Chateau, the Prague Castle Riding School and Ball Game Hall). Pavel Janák died in Prague on 1 August 1956.