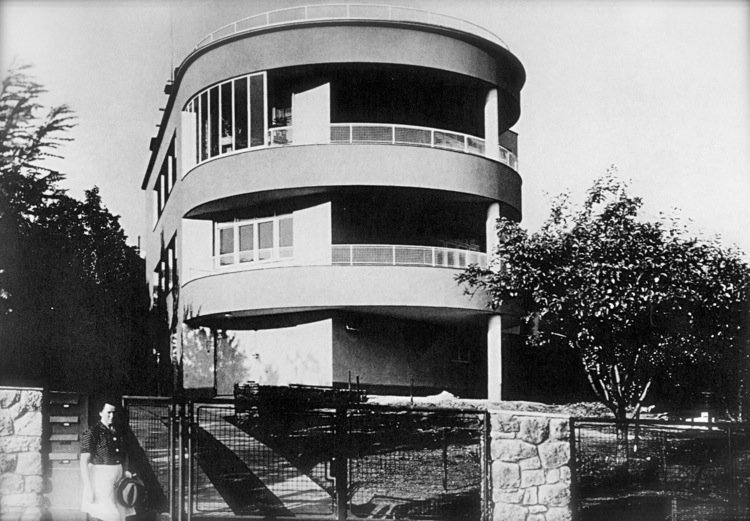 The extensive set of modern buildings in the Masaryk Quarter in Brno was enriched in 1937–38 by a villa designed by Bohuslav Fuchs for the Tesař family. This detached two-level villa with two separate apartment units demonstrates the architect's efforts to add lyrical touches to strict functionalism; these attempts were apparent in his works beginning in the mid-1930s. Fuchs drew inspiration from the work of his contemporary Hans Scharoun, a German architect and representative of the organic stream within functionalism. The ground plans of Fuchs's structures become curved and the nautical elements resemble the mechanical esthetics of ocean liners.
The street facade of the oblong structure is dominated by rounded terraces on the floors carried by a slim pillar. The monolithic mass of the villa is only disrupted by the pointed bay on the eastern facade, which results from the sidelong cubic area of the living room. The main entrance is situated on the western facade and flows into a perpendicular staircase inside. Each floor houses a single apartment with a central hall providing access to the main residential area, kitchen with a housemaid's room and a bedroom with an adjacent bathroom. The irregular places created by the intersection of volumes are used as loggia or conservatories. The service area was situated in the shared basement.
However, the author did not achieve an equally graceful expression as can be seen in the nearby Petrák Villa, where the same components of organic architecture result in a far more convincing design. At present, the villa is protected as an object of cultural heritage and retains its authentic look, except for several replaced windows.