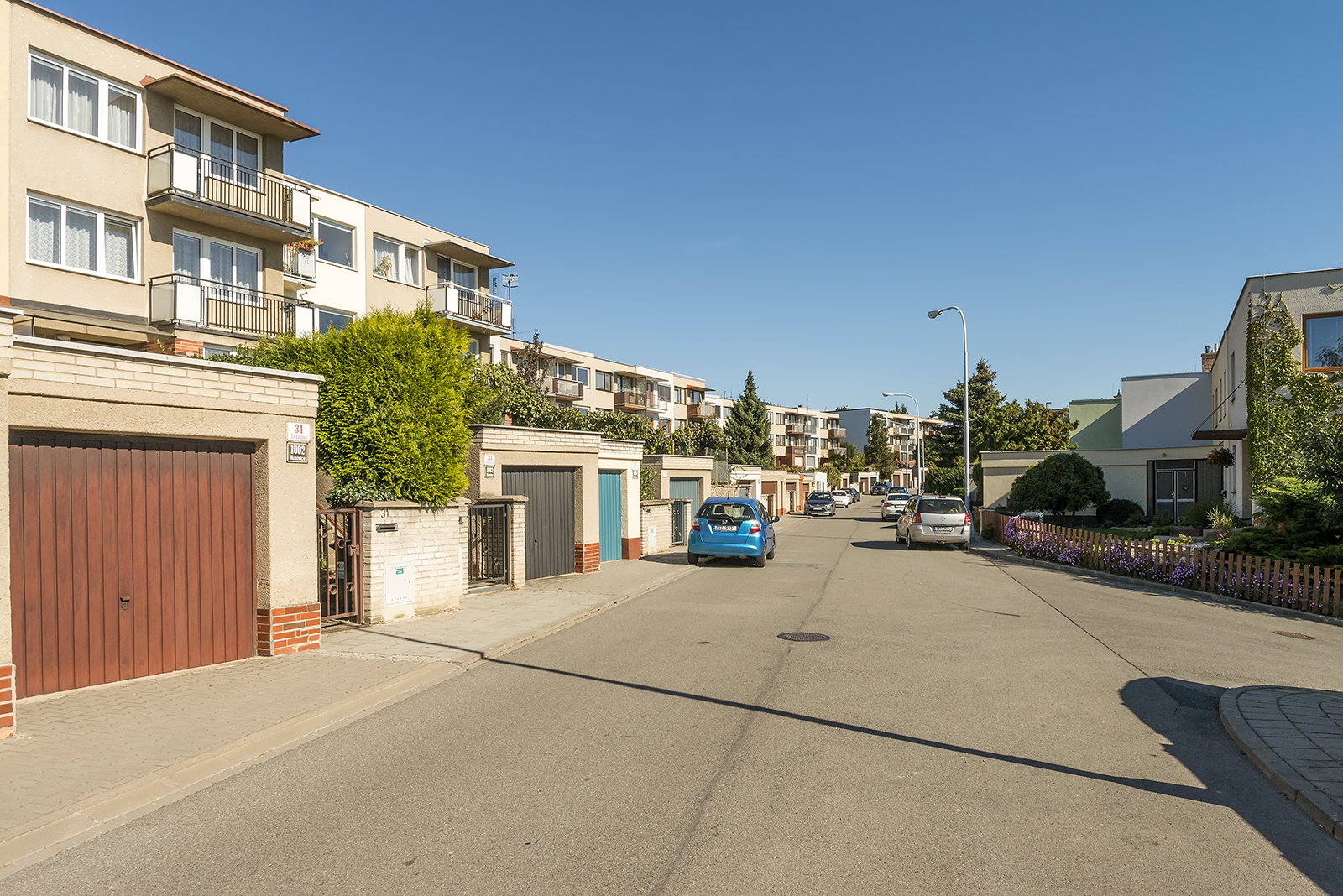 The inter-war name of Slezákova street was Na Výsluní, which translates as ‘on the sunny side’. This is related to its location on the southern slope of Lozíbky hill in the Husovice district of Brno. The older buildings on the street from the interwar period did not survive the extensive urban changes that took place between 1960s and 1980s. The residential development that stands there today, from the period 1978–1983, consists of three types of family houses, which are situated on both sides of the street in several blocks. These buildings occupied the free space at the bottom of the slope between Kohoutova street (featuring atrium houses from the end of 1970s and beginning of 1980s) and Lozíbky street, which was, at that time, already built up (with terraced houses from the 1960s).

From the incomplete archive materials related to the development on Slezáková, it is known that the family houses were built according to standardized designs drawn up in the late 1970s by the Agroprojekt company. These were modified to suit the needs of individual holders of the land, taking into account the exact parameters of sloping terrain of the plots, and the built by the land-owners themselves. The houses numbered 14–46 are type S7 family houses, which were designed by the architect Písařík. The original design for the other terraced houses on the street is not known.

The northern side of the street denoted by odd numbers (19-85) consists of five blocks of terraced houses of the same type. These three-floor one- or two-generation family houses follow the rising terrain of the land on which they were built. The southern façade, which faces the street, is formed by a raised ground floor, two residential floors with balconies and garages accessible from street level. The northern side, facing the garden, only reveals the residential floors of the house, as the raised ground floor disappears under the sloping terrain. The entrance to the house from the street is accentuated by a long flight of steps and a green bank of vegetation. This gives the impression that they fit naturally into the terrain. This is also enhanced by the materials used, such as brick cladding, subtle beige roughcast plaster facades, the original wooden entrance doors and low brick walls.

The southern side of the street denoted by even numbers (2–58) is made up of four separate blocks of terraced houses of two types, whose configuration is determined by descending terrain of the slope they were built on. The street-facing facades are less impressive than those of the houses on the northern side of the street as the entrances do not have the same imposing flight of steps. Their facades also feature smaller windows. Viewed from the southern side, these houses, seemingly inconspicuous from the street, open up onto sloping gardens, overlooked by ground and first floor balconies and accessed from a basement space. The street frontage of the houses in the outer blocks (2-12 and 48-58) is made up of a ground floor garage with wooden doors, balconies separated by a glass block wall and a partially covered entrance vestibule with ceramic tiles. By comparison, the appearance of the (type S7) terraced houses in the two blocks situated in the middle of the street (14–46) is very simple. The bulk of the ground floor garage projects out from the unified front facade next to the main entrance, forming a closed front garden yard with low fencing to the street.