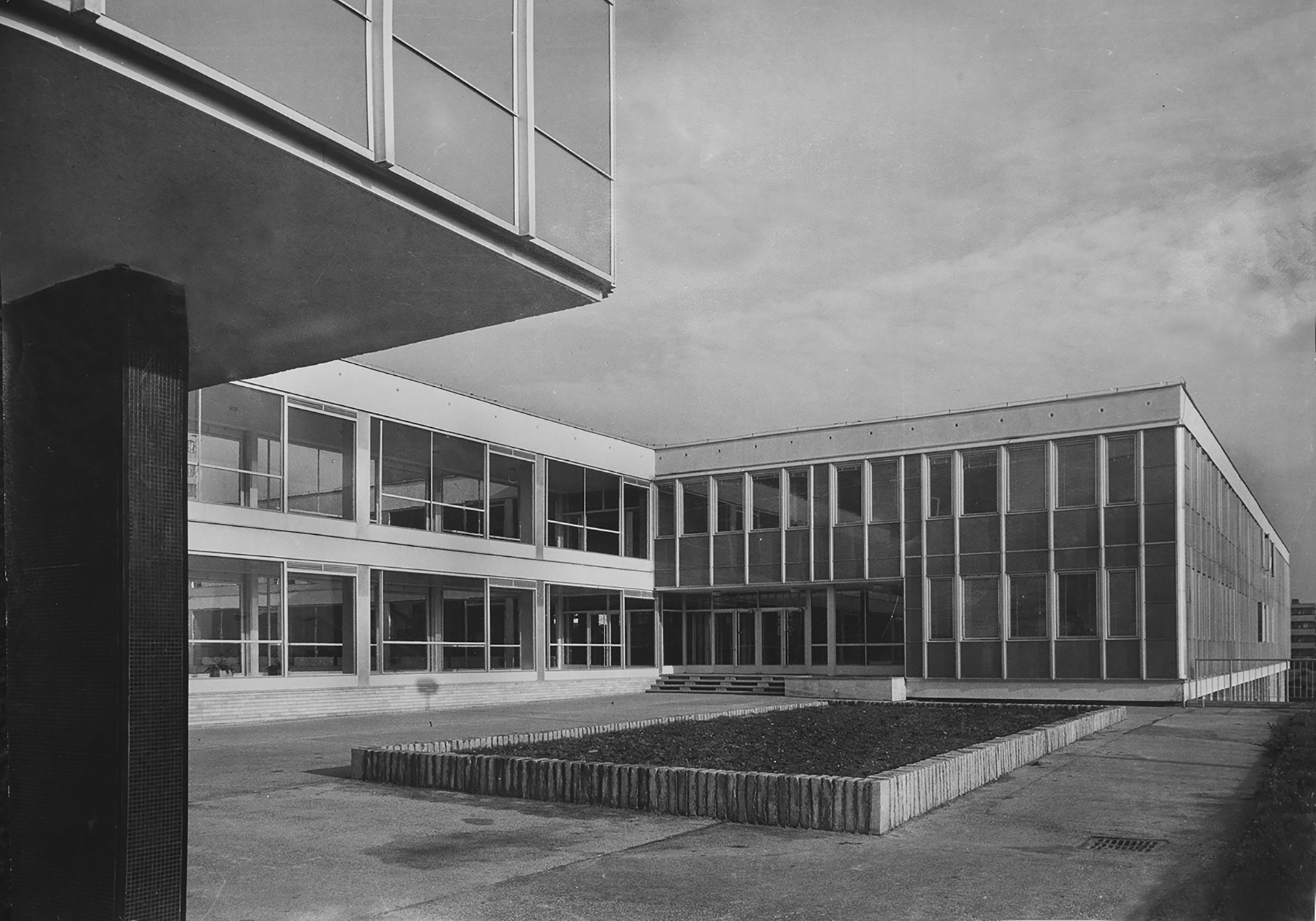 The polyclinic building is located in the southern part of the Lesná housing estate, in its fifth district, where the so-called higher level civic amenities are grouped together. This non-residential district forms the notional gateway to the housing estate. It is also near the balloon loop of the tram line and, therefore, well connected to the public transport network. In the original concept, there was no plan for a polyclinic building, but a sports complex and a multi-purpose community centre. However, in the course of the design work, this feature was dropped in favour of a request for a medical centre that would to incorporate all outpatient and preventive healthcare for the local area, which was home to 50,000 residents.

The project was assigned to the architect Libuše Kopřivíková, who had experience of building hospitals in cooperation with the architect Miroslav Spurný and, on her own, on the project of a hospital in Blansko, which was built in 1968. In Lesná, the architect had to contend with the prescribed height regulation and the gentle slope of the housing estate. While the residential buildings and civic amenities were constructed in the period 1962-1970, the polyclinic building was delayed and was not officially opened until 1974.

The building has two floors and one subterranean floor. The low height pertained to the urban design of the housing estate, because the low and spatially extensive civic amenity buildings provided a contrast to the high prefabricated panel residential buildings. The building is configured in a right-angled S-shape with internal atriums enclosed by fully glazed connecting corridors. The structure and layout of the building is designed as a five-wing double pile central passage building with a prefabricated vertical skeleton of reinforced concrete augmented by cast-in-situ ceilings. The exterior skin of the building consisted of a suspended facade of so-called ‘Boletický’ panels filled with grey coloured glass.

The main entrance to the polyclinic is on the western side from the square Halasovo náměstíand is set on a raised terrace with walls clad in red ceramic brick-effect tiles. The central position of the main hall with staircase and lift allows entry to the individual departments. The internal layout is well arranged and separated into four units, avoiding the need to pass through other departments. The layout and structure of the building and the maximum economic and practical use of the space allows for variability and flexibility in the hospital’s operation. This system of low-rise hospital pavilions connected by corridors originated in the early 1960s in Denmark and had many proponents in architectural circles in Czechoslovakia in the mid-1970s.

The first floor of Lesná Polyclinic provides mainly basic services for local residents, with a pharmacy and GP surgeries. The paediatric department is also on the ground floor and accessible from the eastern atrium, which is enclosed by a glazed corridor on the first floor. Specialized services such as surgery, the dental department and polyclinic management are located on the second floor. On the subterranean floor, which is partially embedded in the slope, there are technical and operational facilities that are connected to a separate entrance for personnel and an access road for ambulances on its southern side.

The comprehensive design of the interior of the polyclinic emphasized both the artistic aspect and the quality of the materials used on the walls, such as ceramic mosaics, wooden wall panelling and marble tiles. All the original interior materials have been preserved to this day in unusually good condition. The wall of the entrance hall is adorned with a coloured mosaic of glass and rose quartz from 1975 by Oldřich Vašica and Karla Vašicová. It depicts the theme of nature, with a mystical being at its centre surrounded by vegetation and zoomorphic motifs. The distinct dark lines of the tree, flowers, shells and birds complement the coloured areas of referring to water, wind, sun and fire. Since 1978, in the closed western atrium, there has been a sculpture by Jiří Marek, which was inspired by the motifs of poems by Antonín Trýb. The glazed ceramic statue presents an abstract reclining female figure. In it we can see the springs and flowing water of the poet’s poetry and the rough-hewn stone that is close to nature, a fundamental theme for Jiří Marek. The final statue can be found outside, on the terrace of the main entrance to the polyclinic building. It was created in 1976 by Zdeněk Makovský in collaboration with Ivan Blažek. The bronze sculpture Srdce [Heart] is made up of an interwoven mass of sharply-cut dissecting structures.

The deterioration of the building’s exterior, mainly the ‘Boletický’ panels of the skin, led to calls for a complete modernization of the building. In 2014, Brno-North city district, which manages the building, commissioned the studio Arch.Design to draw up a proposal for its reconstruction. It has been under way since the end of 2017 and was originally scheduled for completion by the end of 2019. The primary endeavour was to solve the serious problem of heat escaping through windows, to remove asbestos and to reconstruct the unused basement so it could be used as a space for other medical facilities. Led by the chief architect of the project, David Kudla, the studio came up with a design that intended to respect the historical value and the original form and details of the building. Even so, the architects abandoned the original grey coloured glass and opted for a black glass facade. The grid of windows was retained, but in a slightly different tone. The dominant white base and the crowning cornice of the original building will continue to stand in contrast to the red brick cladding. Thanks to the extraordinary quality and timelessness of the functional wood and the mosaic on the walls of the interior of the building, there has been an effort to preserve them in virtually their original form. The disposition and separation of the individual units, which was highly regarded at the time, has, over time, been shown to have shortcomings. For example, the previously separated paediatrics department will now be accessible from the central entrance hall as well. The closed western atrium will also be open to visitors. In the opinion of the main architect of the project, this type of configuration of building would not be possible today due to its demands of space and energy. This fact makes the building all the more architecturally valuable.