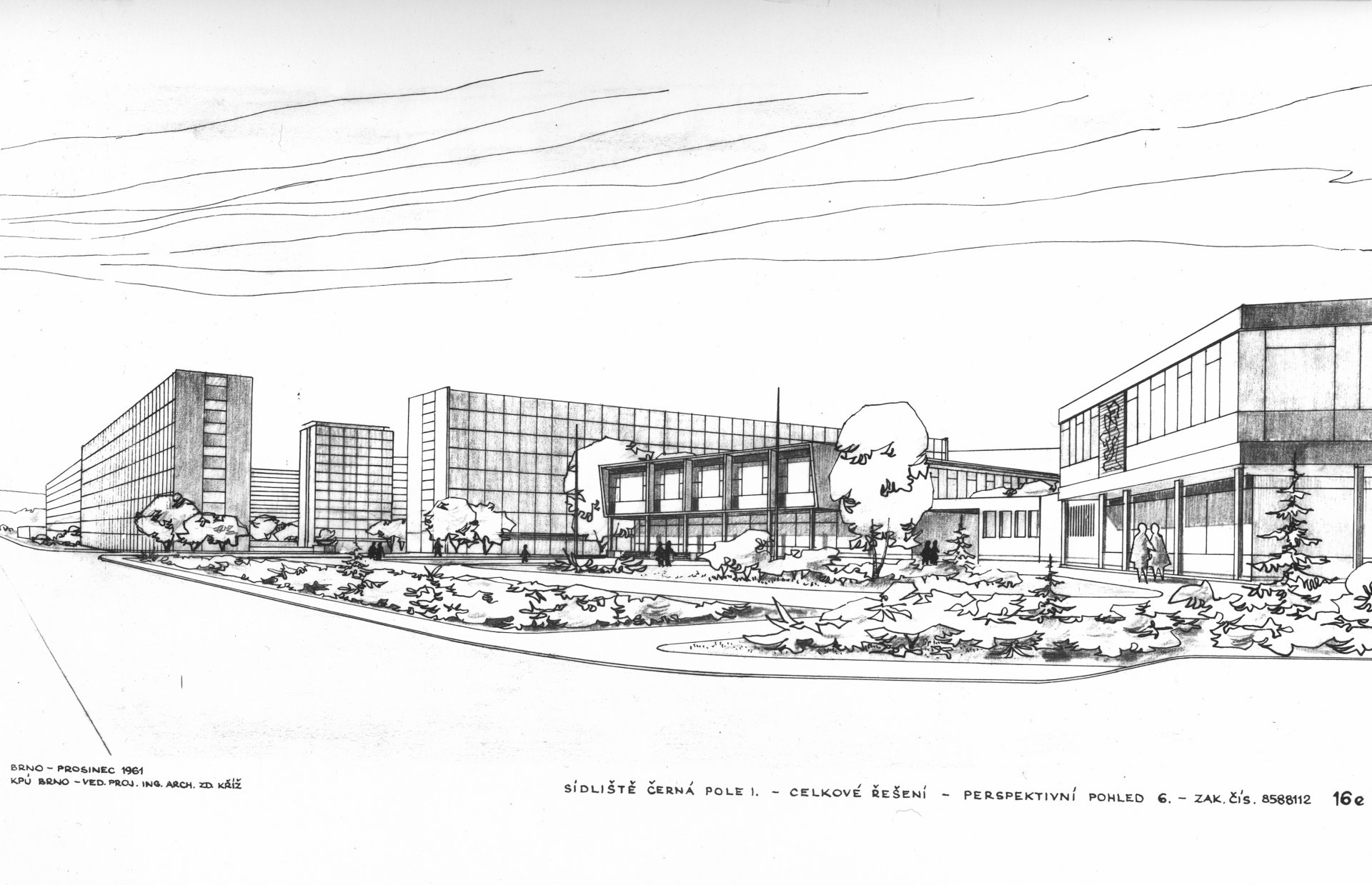 The severe shortage of housing associated with the Second World War had still not been resolved fifteen years after it ended. A breakthrough in housing construction development came at the 11th Congress of the Communist Party of Bohemia and Moravia in 1959, during which it was decided that the progressive method of prefabricated concrete panel construction would be used to build a projected quota of 2,000 to 3,000 apartments annually. There was a new plant for manufacturing prefabricated concrete panels in Horní Heršpice that would help make production in Brno and its surroundings faster and more efficient. Thus began a period of mass construction of prefabricated panel buildings which would indelibly change the appearance of Brno.

The compact housing estate in the district of Černá Pole was built on a vacant site between a disused railway line (in the direction of Tišnov) and an area of family houses in Štefánikova čtvrť . In terms of urban planning, the housing estate has a relatively straightforward composition, consisting of three eight-storey prefabricated panel blocks of flats around the square náměstí SNP. In the western part, close to General Píky street, three separate thirteen-storey tower blocks dominate the skyline. In 1964, following the original project, two seven-storey pre-fabricated panel buildings were erected spanning the length of Bieblova street using local technology known as type B60. In 1968, a row of eight nine-storey apartment blocks of the ‘Lesná’ type was built opposite them facing the street. With this, the projected capacity of the housing estate, which was 974 housing units, increased by another 288.

In contrast to other housing estates, within three years of moving in, local residents had access to a full range of public amenities, which included a small shopping precinct, a primary school, two nursery schools and a creche, and a medical and dental centre. In 1969, a community centre with a cinema and ceremonial hall was also added to these facilities .

In the 1960s, the public spaces of the new housing estates were not only invigorated by newly planted greenery, benches and playgrounds, but also by numerous quality works of art. This was the result of a new building law that required the investor to spend between one and four percent of the overall budget of the project on artistic decorative works. The sculpture Vlna a Pohádka [Wave and Fairy Tale] by Miloš Axman and the allegorical sculpture Hudba[Music] by Jiří Marek in front of the café cinema can still be found on the Černá Pole housing estate. Since 1974, a bronze monument by Ladislav Snopek commemorating the Slovak national uprising has added to the appearance of the square. Originally, there was a concrete fountain situated in the green space between the tower blocks, but it was decommissioned a very shortly after due to technical faults and complaints about the noise from local residents. In 2017, when the park was restored, it was removed and replaced with a modern water feature.

Since 2000, the housing estate has undergone a complete revitalization, which included landscaping and restoring public amenities. Rather than enhancing its attractiveness, the cheap materials and multicoloured exteriors of the newly-clad buildings detract from the value of the development.