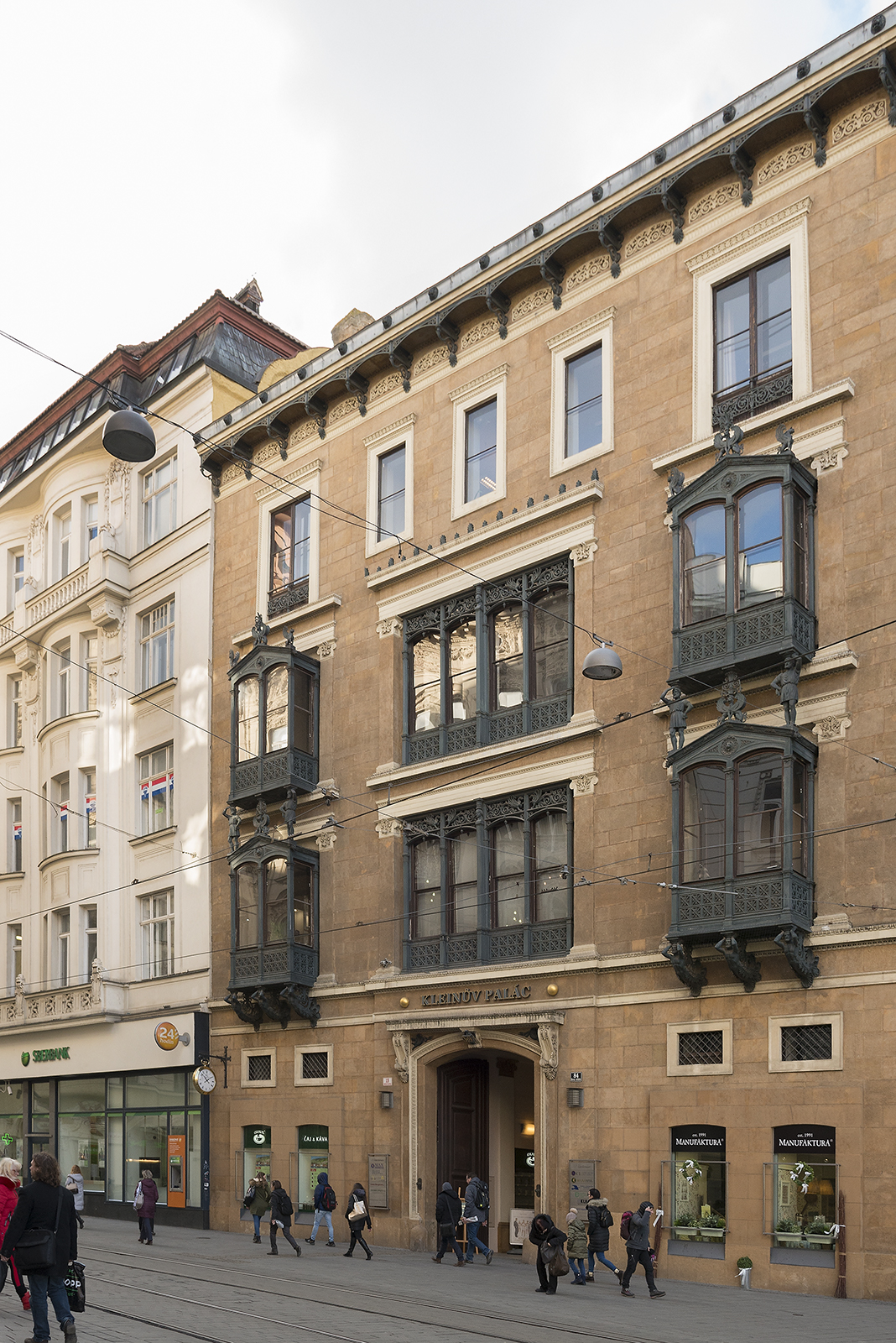 This Neo-Renaissance palace was built in the years 1847 and 1848 in the heart of Brno on what is currently known as the square náměstí Svobody.It was the family residence of the Klein family of industrialists, whose main entrepreneurial activity was iron production and is alluded to in the form of cast-iron oriels and sculptural decorations on the facade of the building. The grand four-storey city-centre palace with inner courtyard, spacious residential rooms facing the square, and interiors resplendent with artistic craftsmanship was designed by the Austrian architects Ludwig Förster and Theofil von Hansen, who were renowned representatives of historicist style and had been involved in the rebuilding of the Vienna (and Brno) ring roads. After a series of changes in ownership, the building was expropriated after the communist coup of February 1948, and was placed under municipal administration. It subsequently underwent a series of modifications that deprived it of its original character as a residential building.

In the mid-1980s, in connection with plans for an urban conservation area in the city centre and the gradual restoration of historical monuments, Klein’s Palace was singled out as a possible location for the Department of Culture because of its central position. On the basis of designs by the architect Jiří Mikšík of Stavoprojekt Brno, the former burgher house was subsequently reconstructed for the purposes of the Young Artists’ Gallery and the music department of the Jiři Mahen Library so as to create an easily accessible centre for the culturally-minded public. The original layout of the building was largely preserved. On the ground floor, with large shop windows on either side of the main entrance onto the street, spaces were created for shops dedicated to jewellery and photo processing. The round staircase in the central part of the building was retained as the building’s main connecting link. The three former residential rooms facing the square on each of the upper floors of the palace were transformed into exhibition spaces, lecture rooms, reading rooms and, on the top floor, an interconnected multi-purpose hall. The smaller rooms around the inner courtyard, on the ground floor, served as storage facilities and a reception area, and on the upper floors they served as club rooms for special-interest organizations, refreshment rooms or library listening rooms.

After the fall of the communist regime, in the late 1990s, Klein’s Palace underwent another reconstruction, in which it was transformed into a banking and shopping centre with a glass atrium illuminated from above.