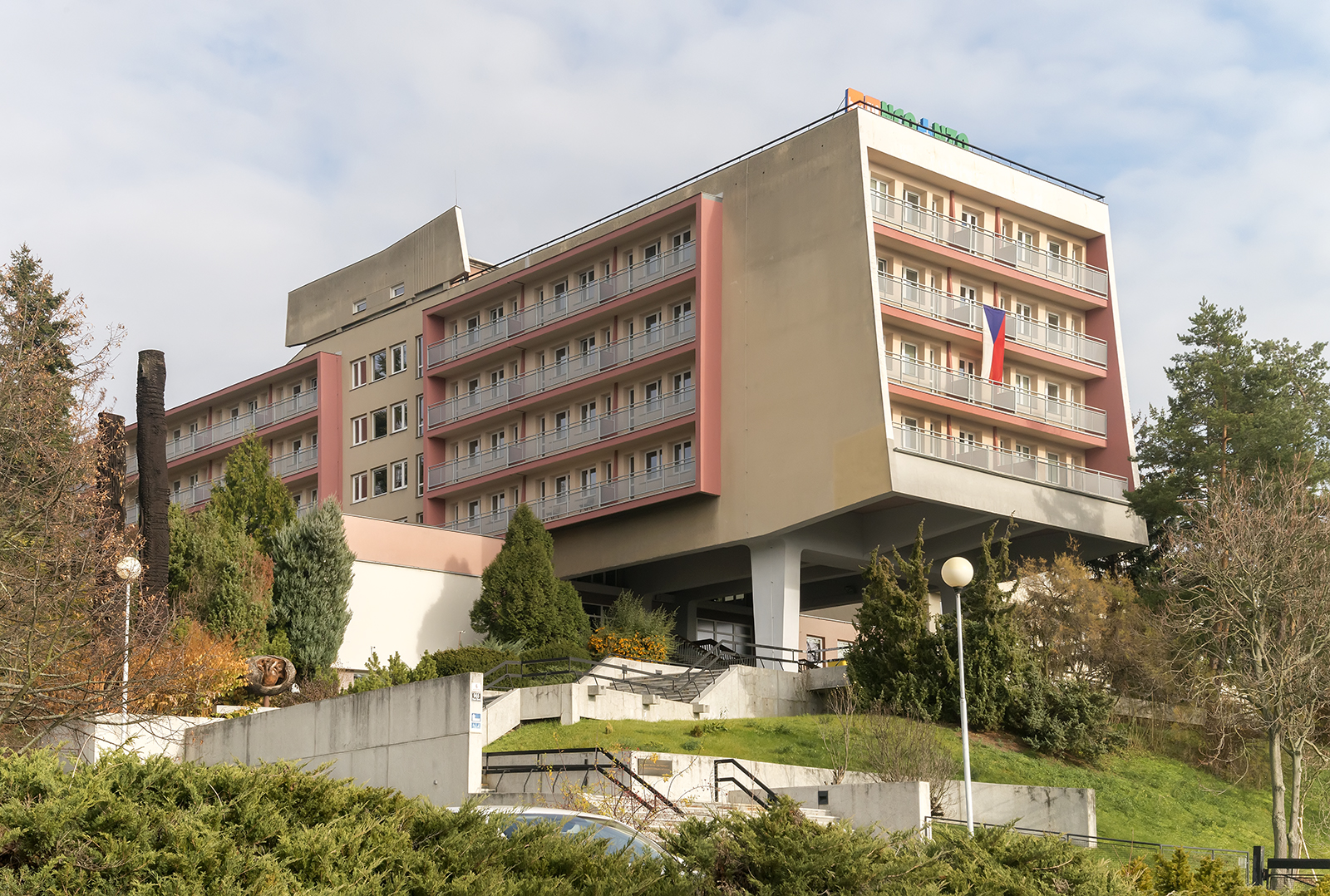 ‘The International [hotel] will be jealous!’ This was a 1967 newspaper headline on the architecture of the Brno building of the institute for the further education of nurses and allied health workers, known as the ÚDVSZP. The designer of the building was the architect Vladimír Selzer working in the framework of the project Zdravoprojekt [Healthcare Project]. He recruited two designers, Miloš Holeček and Vladimír Holič, who elaborated an unusual design for the structure and foundations of the six-storey accommodation facility.  As with the Hotel International, the National Centre building is an example of Czech brutalism in the context of Czechoslovak architecture and is inspired by the post-war designs of Le Corbusier and Marcel Breuer.

Vladimír Selzer came up with an extraordinary solution for the sloping site on Vinařská street: he moved the 100-metre-long main body of the accommodation wing out from the steep terrain of the Jiráskova čtvrť district (today’s Masarykova čtvrť) towards the Brno Exhibition Centre. This created a 12-metre height difference between the northern and southern parts, and, at the same time, gave its users breathtaking views from Žlutý Kopec hill out onto the valley below. The requirements of the Department the Chief Municipal Architect and the city plan gave rise to a piece of architecture that is significant not only for its appearance but for the structural design by Holeček. However, at the outset, the construction company Pozemní stavby [Land constructions] wanted to build a rather unimaginative prefabricated construction because of the speed and ease of assembly. In the end, a cast-in-situ reinforced concrete monolith was decided upon, in the forming of which Selzer and Holeček demonstrated the quality of individualized architecture of the 1960s.

Their work was preceded by a detailed land survey of the southern slope of the Pisárky valley, as the construction site was in a very highly valued recreational and residential part of the city with views over the grounds of Brno Exhibition Centre. The original concept consisted of three parts: the main accommodation building and two lateral administrative and educational wings. This solution would prove very practical, especially in the gradual nature of the construction of the project, which was carried out between 1965 and 1969. It was originally scheduled for completion in 1968, but the arrival of Soviet occupying forces delayed construction work.

In the first phase, work began on the main accommodation wing for 250 beds. Thanks to the demanding and highly specialized engineering geology survey by R. Svoboda, J. Křivinka and L. Hojsák, it was possible to complete the building in a very short time, even though the 2-hectare site had unstable and diverse subsoil. The open skeleton of the building, a four-storey reinforced concrete grid facing the exhibition grounds, was set on two massive supports. The front of the building is formed by a seven-metre cantilever, which is the structurally most complicated element of the entire construction. This feature was quite rare in the architecture of the Eastern Bloc and its use was a contemporary refinement that both determined and enhanced the architectural expression of the building.

The double-pile central passage building consisted of four above-ground floors with an axial network of 6–3–6 metres, each containing 29 double rooms. A unit was made up of a hall, sanitary facilities and a loggia. The furnishings were made to order. In addition to the rooms for accommodation, there were also study rooms, a 90-metre-square common room, a kitchen and a laundry and drying room. On the second floor, besides the above-mentioned configuration, there was also a language laboratory and a soundproofed study room with modern audio-visual equipment. The central area of the main building was the entrance hall located on the first floor, from which it was possible to access the classrooms and corridors leading to areas for study and dining on the same floor. The vertical thoroughfares were the two lifts and staircases running through the building all the way down to the basement, where the library, snack bar, telephone room and other service facilities were originally located. In their free time, visitors and users of the building also had the use of a large terrace adjoining the entrance hall. The original design included the utilization of the 400-square-metre area on theroof of the building for sunbathing and taking in the views. Another recreational feature in the design was a 6 x 12-metre swimming pool with artificial sandy shore set on the slope beneath the accommodation building towering above it.

The final stage in the construction of the complex was the merging of dining and teaching wings into one and subordinating it to the main building. The two-storey building can seat up to 160 people. It has its own kitchen with appropriate facilities and storage space for its operations, and can deliver up to 400 meals per day. The building consists of a reinforced concrete skeleton filled with masonry. On its southern side, there is an above-ground floor that projects out by three metres resting on a series of columns. This shaped section of the south wall of the dining room is the dominant feature with its 24-metre long by three-metre high windows. The building is connected to the monolith by a covered passageway, which also leads to the entrance hall, car park and access road.

Because the site covered two hectares, it needed landscaping and gardening work. The design was done by Otto Eisler, who harmonized the surrounding environment with the architecture of the building by planting new trees and making use of the existing shrubs. From the outset, it was envisaged that art works would be designed for both the exterior and interior of the building. These were created by Zdeněk Macháček (wooden sculptures), Pavel Navrátil, František Šenk, František Navrátil, Inez Tuschnerová, Miroslav Konrád, Bedřich Petrovan, Miroslav Netík and František Kocourek.